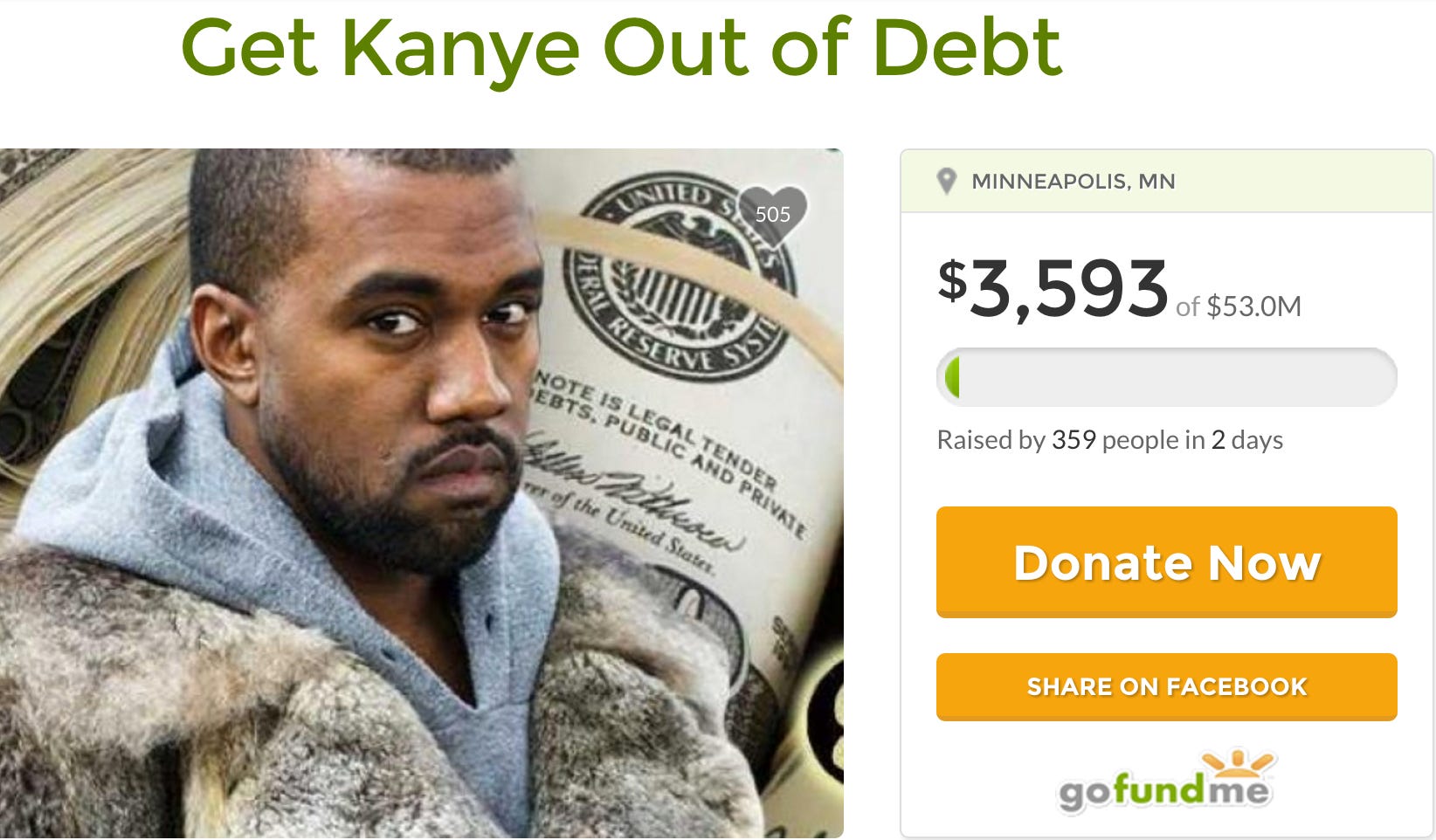 GoFundMe – Kanye West, prolific entertainer/fashion icon/celebrity/member of the Kardashian family needs our help!  Recently, Kanye let us in on his personal struggle. He is 53 million dollars in debt and it doesn’t look like he’s going to get Mark Zuckerberg’s help that he desperately needs. We must open our hearts and wallets for Kanye today. Sure he is personally rich and  can buy furs and houses for his family, but without our help, the true genius of Kanye West can’t be realized. As Kanye West has told us time and time again he is the “greatest living artist and greatest artist of all time”. Great artists need to be supported financially to achieve their full potential.  To quote Mr. West, “I am Warhol. I am the number one most impactful artist of our generation. I am Shakespeare in the flesh. Walt Disney. Nike. Google. Now who’s gonna be the Medici family and stand up and let me create more!” I’d like to update everyone and let you know that I don’t want a penny from this. I would like everything to go to Kanye. Since he is such a high profile public figure, I would prefer to have GoFundMe transfer all funds to his people directly.

This is the lamest thing I think I have ever seen in my entire life. From both sides. Kanye begging for money on twitter and the dumb ass fans actually donating money to an internet fundraiser. First of all, Kanye West is not $53 million in debt. Thats just not possible. That doesnt make any fucking sense. Second of all, he’s married into the wealthiest celebrity family in the world. The fact that people are feeling bad for KANYE WEST’S FINANCIAL SITUATION is fucking insanity. I mean hes gotta be the most pathetic rapper in history. Even rappers who arent even really rich act rich. And you got Kanye West crying poor. Fuck outta here, Kanye. And fuck outta here to anyone actually donating money to a random internet fundraiser to give money to the guy who’s married to fucking Kim Kardashian. It looks like most people are donating money just to tell the person who started it that shes an asshole, but still I’m sure there are plenty of idiots out there like “Only $49, 997,000 more to go until we get Donda Corp from Kanye!!!!”