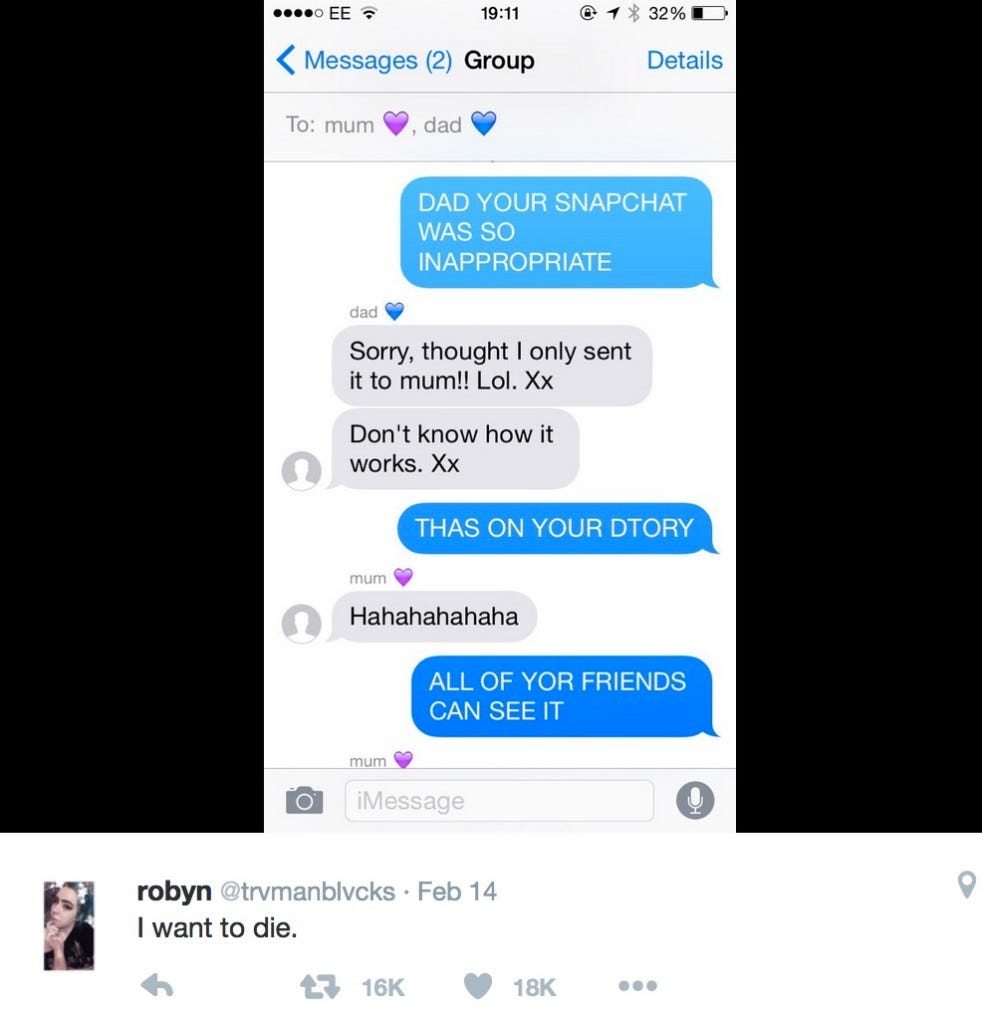 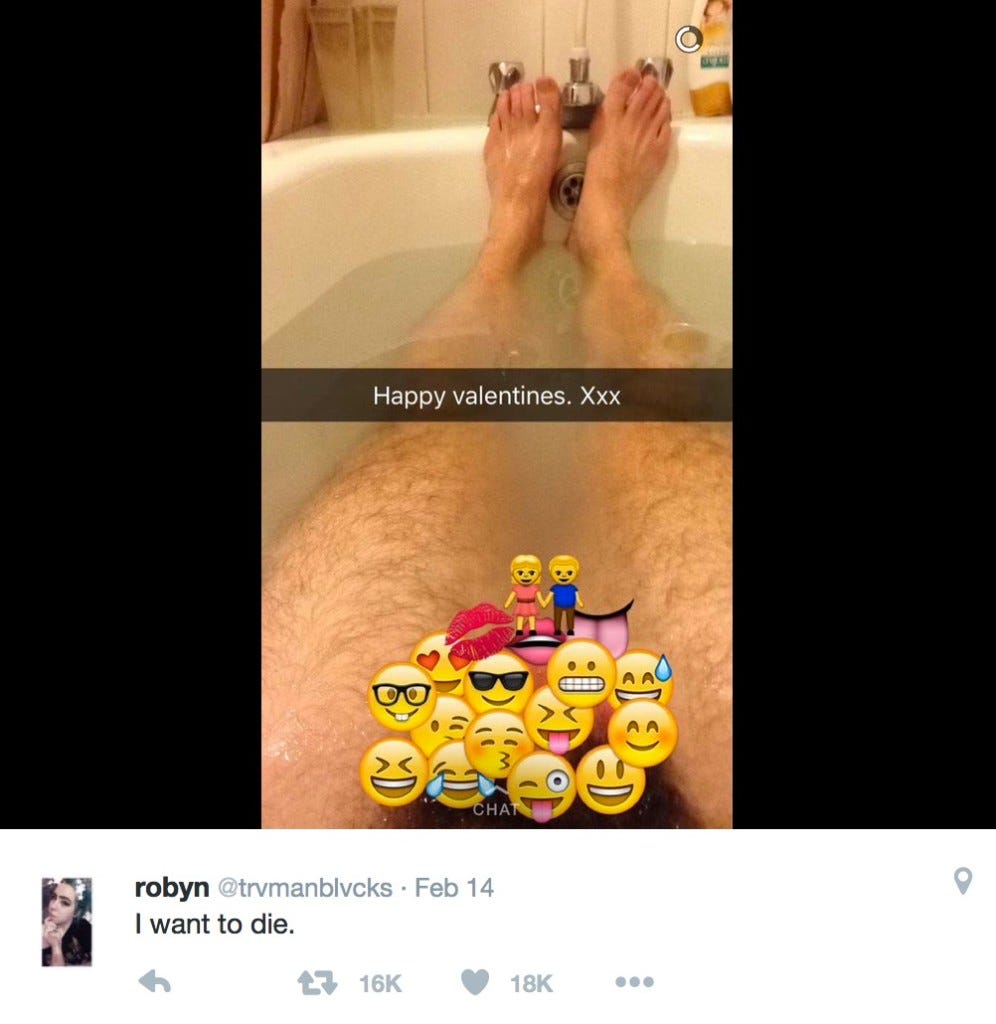 Mirror – A disgusted daughter received a Valentine’s Day Snapchat of her dad’s genitals as he took a bath – which he meant to send to her mum [EDITOR’S NOTE: That means “mom” in English].

Even worse – the offending image of her old man’s old chap has gone viral and has been seen by an estimated 1.5 million.

Robyn Millen, from Brighton, said she “wanted to die” after the rude Snapchat appeared in her feed.

The fact the member itself was covered in emojis seems to be scant consolation.

I can’t think of more of a nightmare scenario as a father or a daughter, a classic lose-lose situation. And it’s a million times worse that it’s a bathtub pic. I know it’s covered by those emojis but have you ever taken a bath as an adult? I took one of those sexy bubble bath ones on a trip with an ex a while back and my dick just floated up to the top of the water like a buoy, really unappealing as a sensation and extremely odd visually. It’s literally the worst thing you could Snapchat and pass it off as a sexy pic. I don’t get how guys still fuck up dick pics at this point. You want to shoot it from an upward facing angle, like a girl posting a picture of a building on Instagram. Make it stand tall and proud, always fully fluffed. These downward shots or bath photos of an old dick weakened by warm water are not how you want to present that thing. No woman sees a dick looking like a floating slug and goes “Yes, gotta have that.” Protect the brand.

That said what I don’t blame the dad for is fucking up on Snapchat. The worst is when you’re sending a Snapchat and picking the person and that moment of fear that you somehow also clicked “My Story” before it went out. Or accidentally clicking someone else with a similar name or an extra person because your finger was too fat. Harrowing experience particularly when theoretically also working on most of these Snapchats one-handed.

Oh and I appreciated the dad’s response when the daughter told him it was going viral. Bet he wouldn’t have cared even if his little turtle head were visible poking out of the thistle of pubic hair: 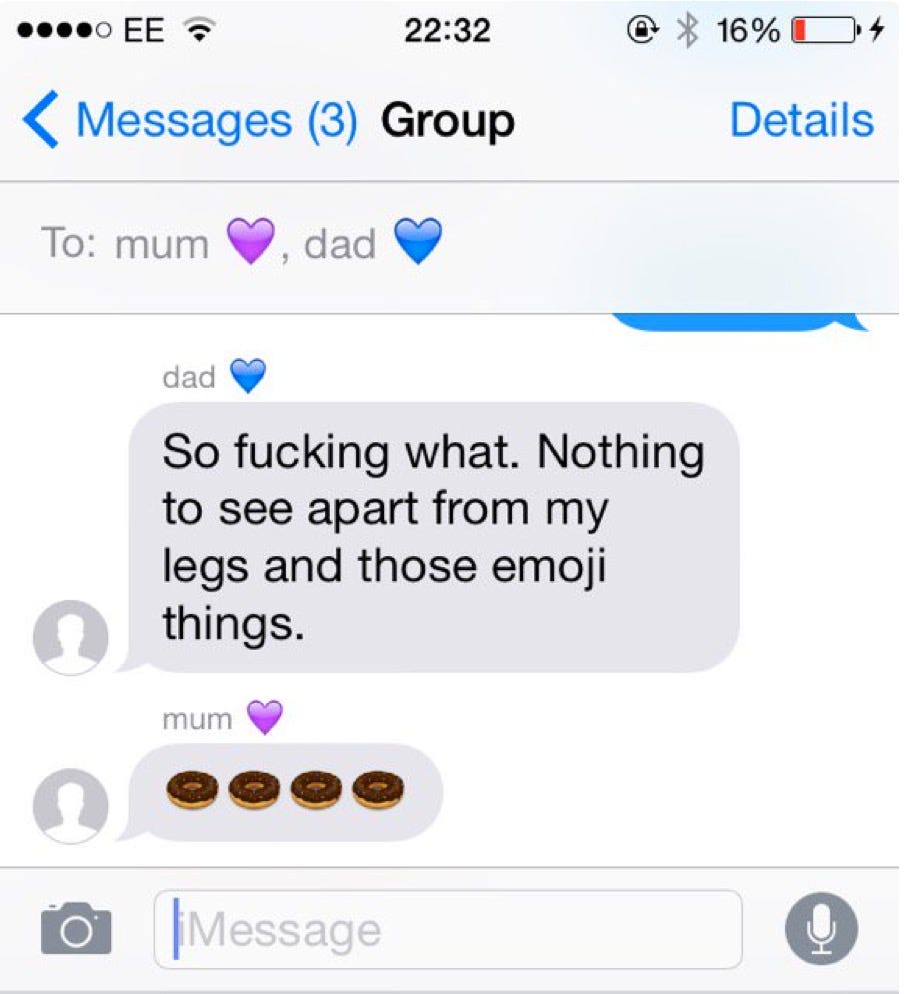 Probably would have gotten him off if everyone saw it too. If a man will take a picture of his cock in a bath and think it’s wise to send for someone else’s consumption, who knows what he’s capable of.