Another day, another rapid fire Twitter meltdown where Kanye West acts like a delusional, melodramatic asshole. Firing off tweet after tweet like he’s got a quote to meet or, like this dude said, a time limit with this phone. Things started off simple enough…I’m the greatest rapper of all time, I’m the greatest fashion designer of all time, I’m not in it for the money, yada yada yada: 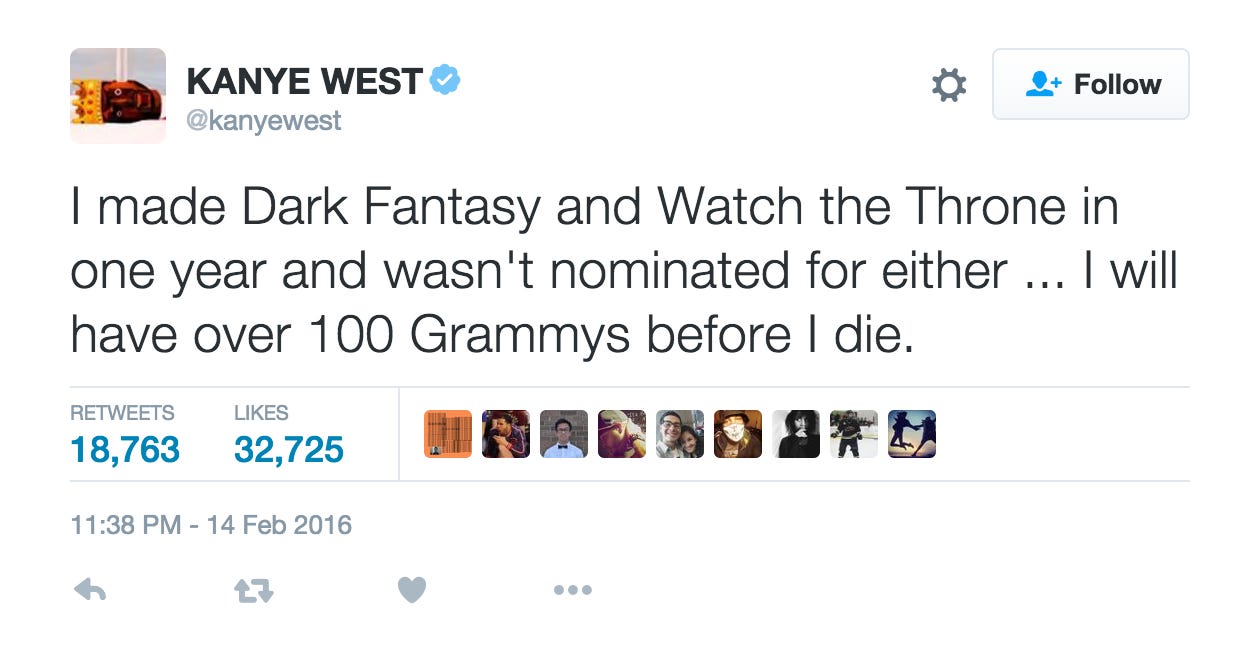 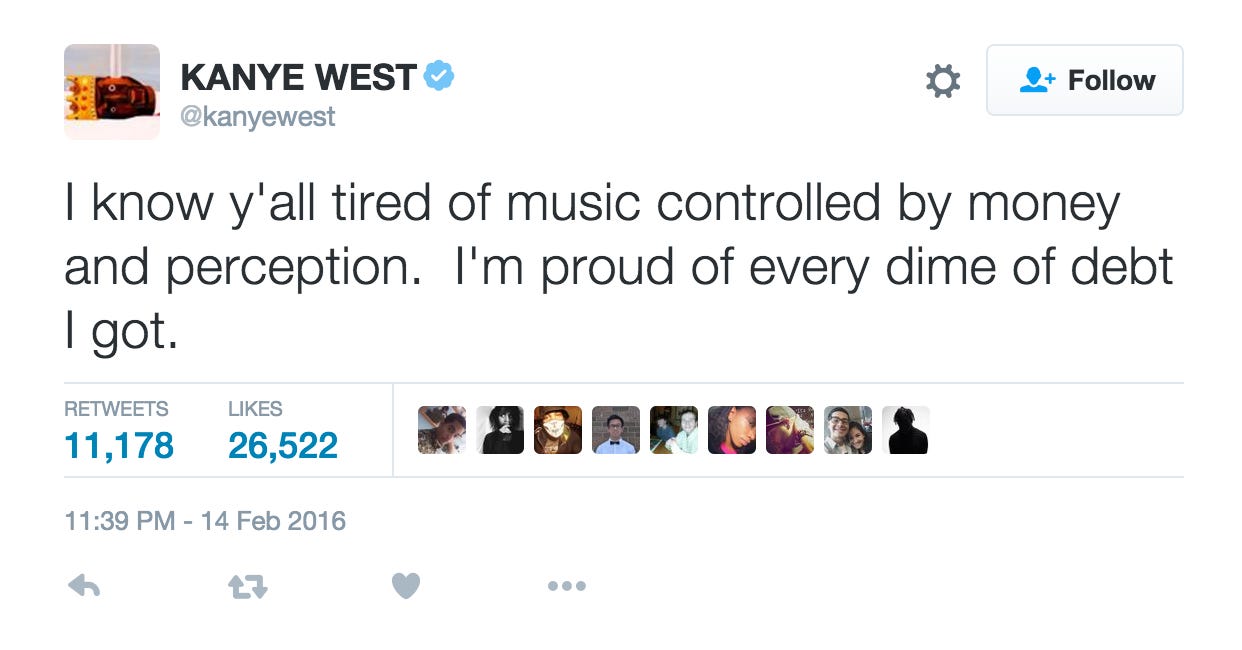 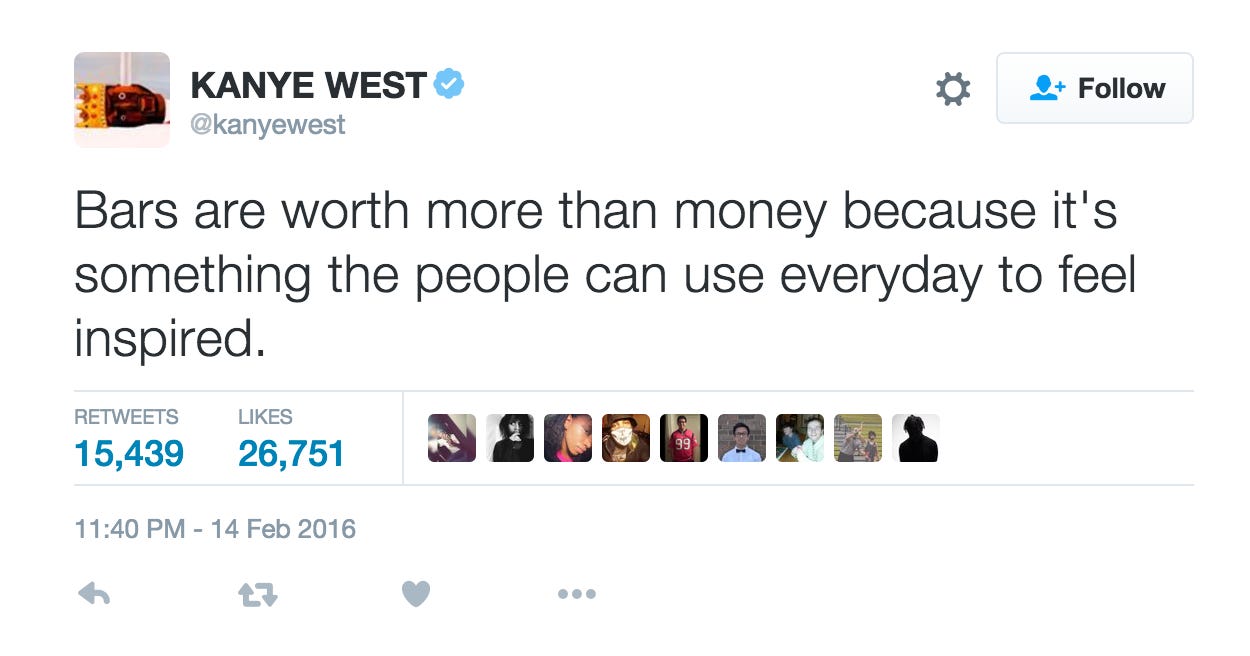 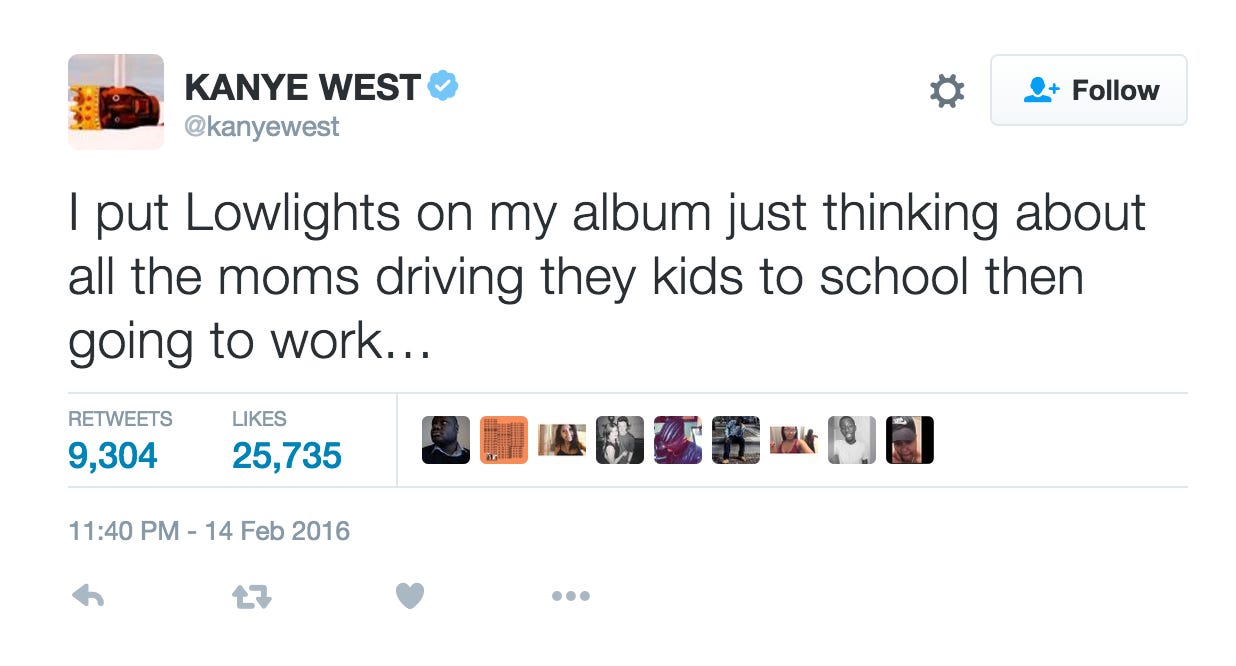 And then things go completely off the rails where Kanye tells the world he’s the next Walt Disney and he begs Zuckerberg and Larry Page to invest in his ideas so he can create a corporation called Donda where he will build hovercrafts and fund disease research with hydroelectricity and compressed natural gas: 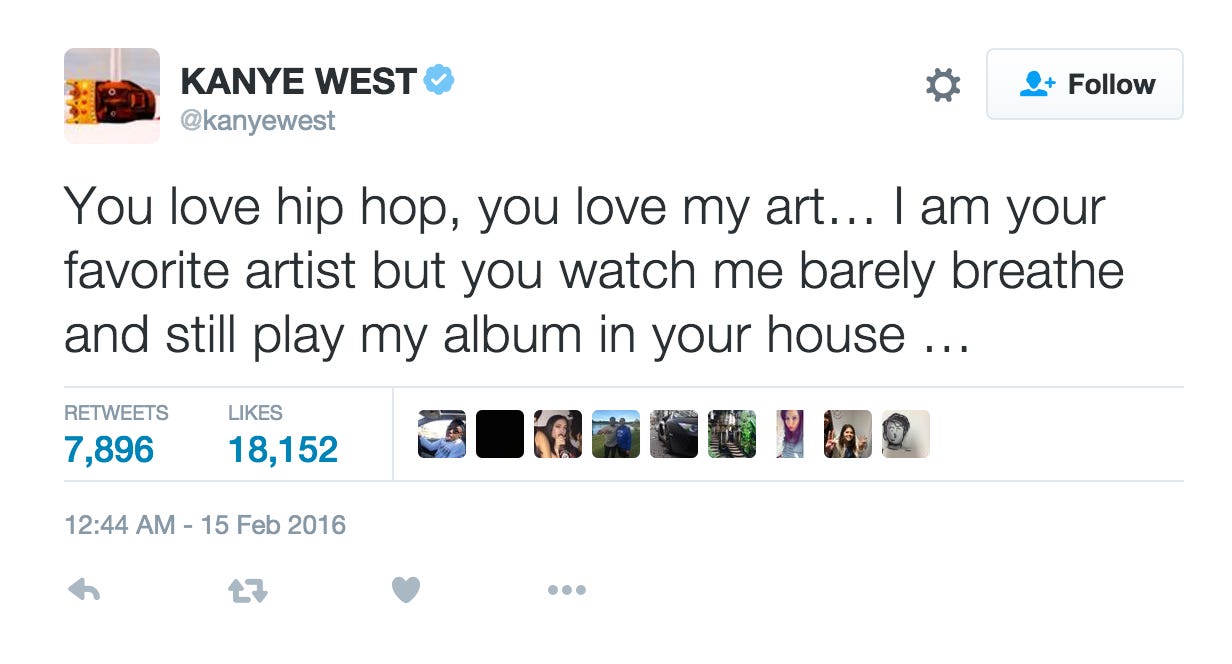 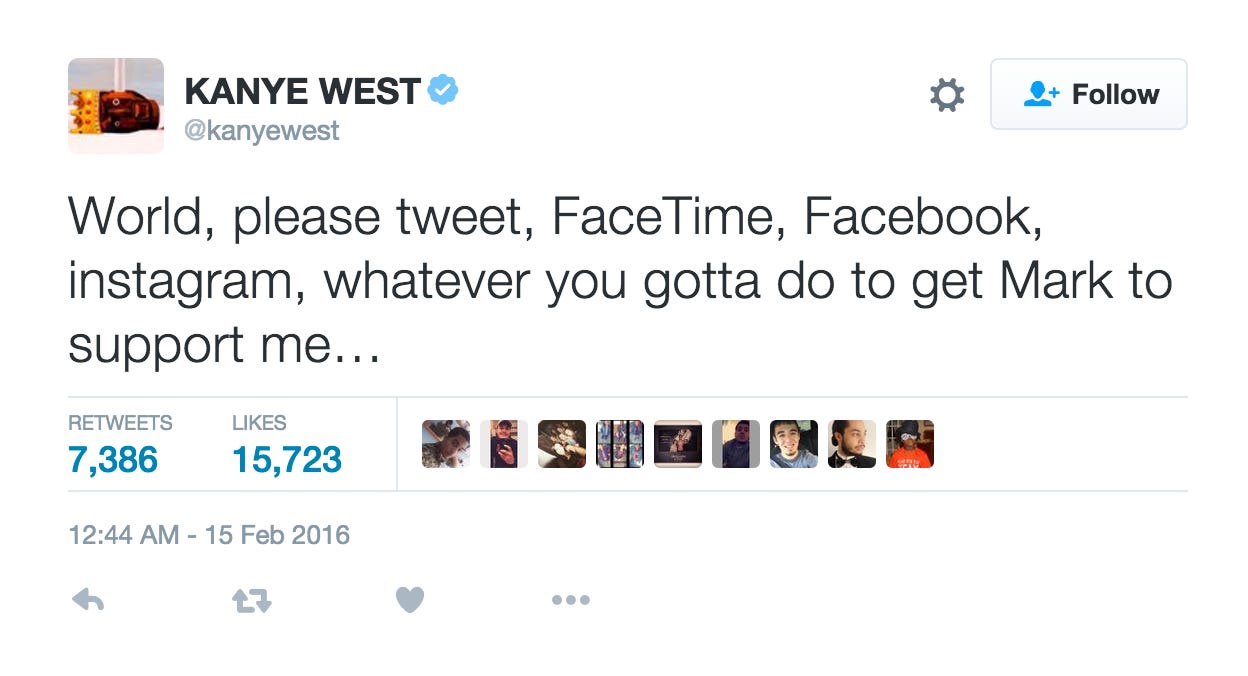 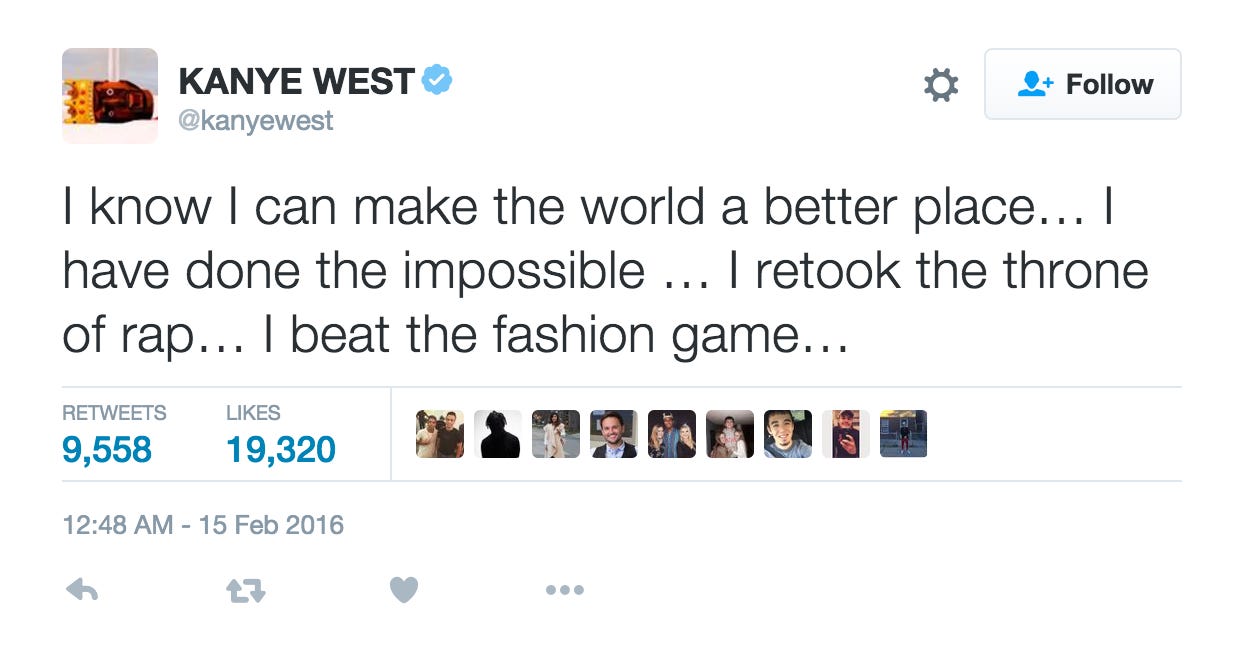 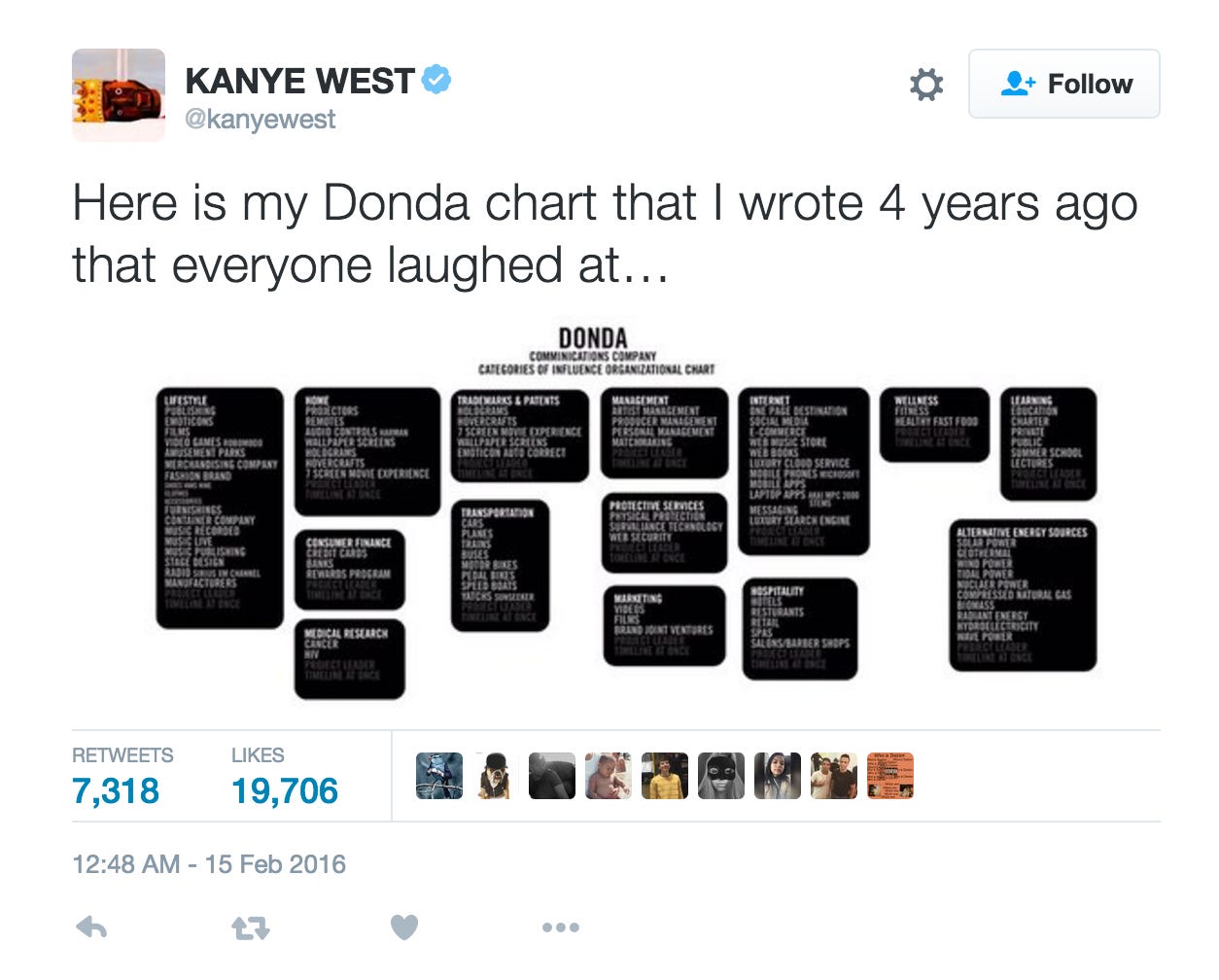 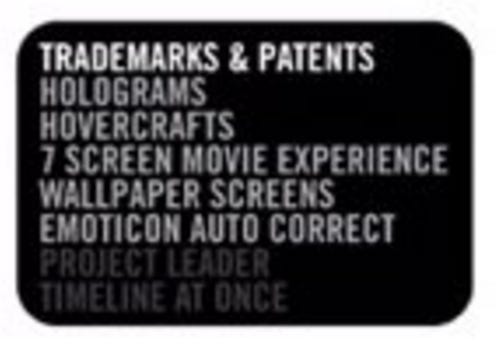 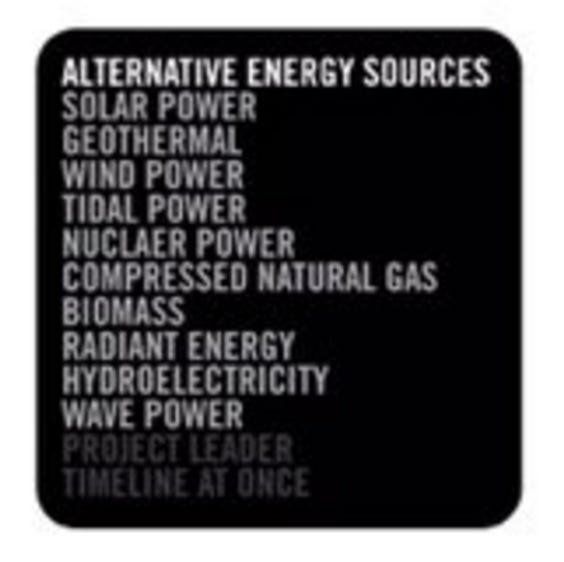 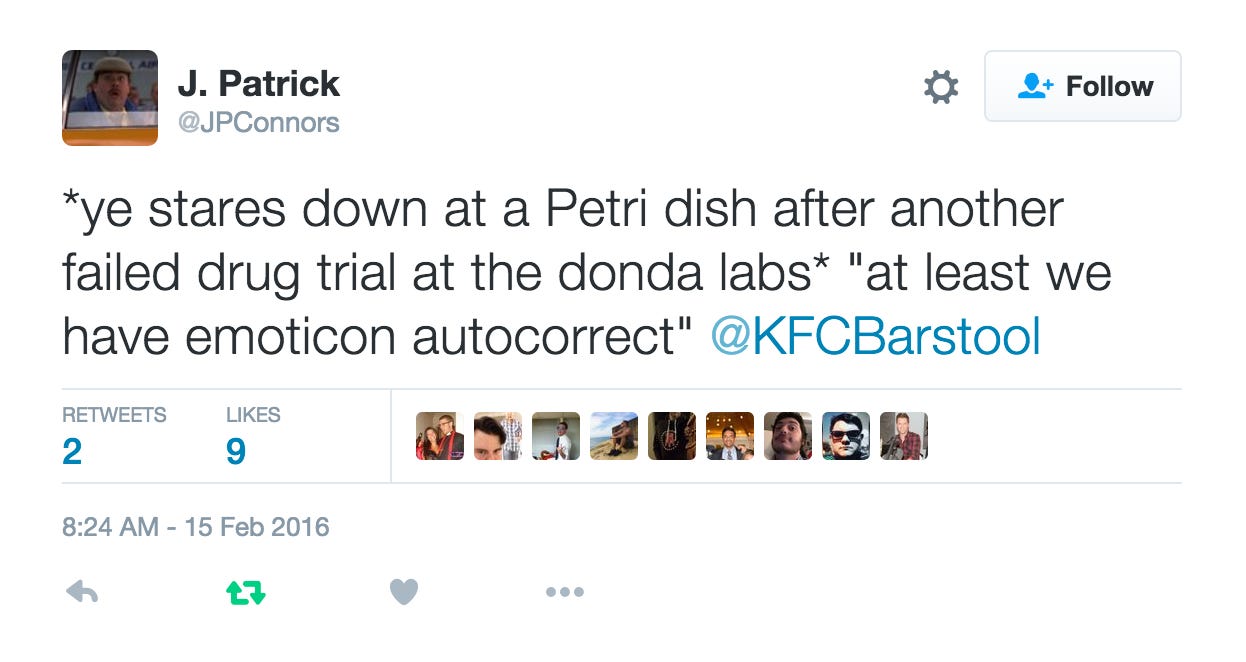 And then for the grand finale…the female version of bruh…

I’m not gonna sit here and say Kanye West is “just a rapper.” I’ve said that many times before in regards to his music.  When it comes to his actual music, I’d love to shake him and tell him to just be a good rapper again. The music he makes now is an entirely different genre of music that I dont even think has a name yet. If you like that music, thats cool. Its not for me though. I liked Famous, Real Friends, 30 Hours and No More Parties in LA, and the rest was too funky for me. So as I’ve said before I want him to “just be a rapper” again and make hip hop beats and spit rhymes rather than the weirdo electro folk music with his auto tune sing song stuff. Again if you’re into his new music style, good for you, enjoy it. I’m not.

But more to my original point, I’m not gonna call Kanye West, the person, just a rapper. Because hes a goddam genius and the single most confident person alive. Borderline insane with an outlet to reach a TON of fucking people. And thats a very powerful thing. I mean the dude just decides hes the greatest of all time…greatest person, that is…and his unwavering, undying Stans all believe it. I dont know if it speaks more to Kanye’s cockiness, the younger generation of his fans that actually believe all his bullshit, or a combo of the two, but I dont think there’s anything Kanye west can’t do. You factor in his wife’s legion of idiots and it actually becomes more likely than not that he achieves all this shit. Like I’d love to sit here and write a blog telling Kanye fucking West that he’s not goddam Leonardo Da Vinci. I’d like to tell him that he looks like Big Cat pitching “Spoiler: The Movie” to Mark Cuban. But gun to my head, do I think there will be Kanye West Hovercrafts one day…I think I’m leaning towards yes. They’ll be just like his shoes – weird, nothing special, and over priced – but there will legions of people riding Kanyecrafts and Yeezyboards saying that they are the best flying cars out there. They could be crashing left and right and the Kanye fans would still declare it the best hovercraft available. The world will be making sex tapes with Kim K holograms inside their homes with 14 screen televisions. I’m afraid that the blind followers of Kanye will allow The Donda Initiative to take over the world and the future will look like Back To The Future II after Biff returns with the sports almanac.

I think he’s a melodramatic asshole and my first inclination is to say hes a delusional dickhead but the scary thing is its not very delusional. I mean I’m not saying hes gonna go from Adidas sweatshirts to curing cancer with laboratories fueled by compressed natural gas. I’m just saying that this day and age, when you have mobs of people who follow your ultra confident aspirations, anything is possible. Read: Donald Trump. Read: Dave Portnoy. When everyone eats up your bullshit, you can feed them anything.

In the meantime though, can Zuckerberg break Kanye off with a few dollars? Because I’m dying to see how emoticon auto correct works. Like its gonna know whether I want the Crying Face or the Fire emoji based on my text that came before it?? Thats fucking wild.