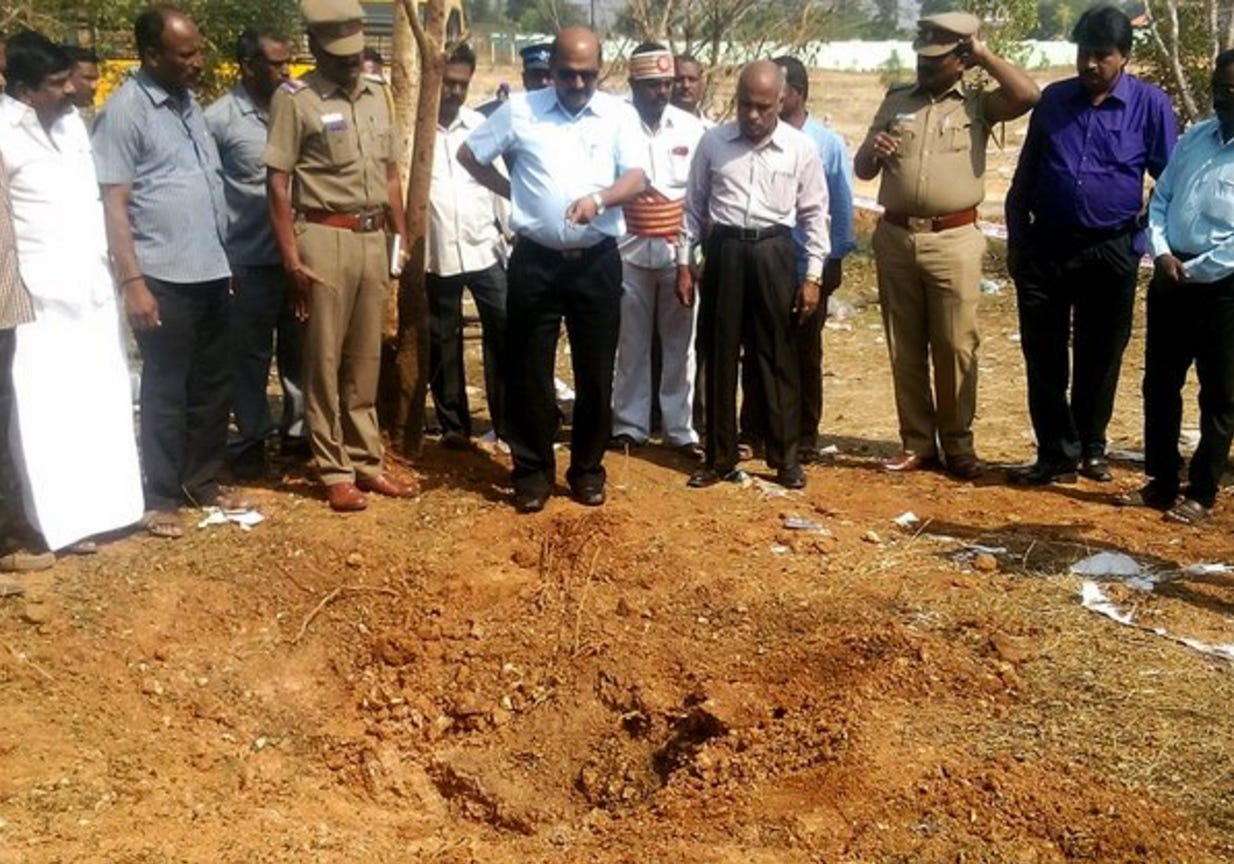 NY Times – The news reported by Indian newspapers and picked up by many outlets around the world was startling: A bus driver was killed and three people were injured after a meteorite hit a college campus on Saturday. If true, it would have been the first scientifically confirmed report in history of someone being killed by a meteorite impact. By Tuesday, however, the story appeared to be fizzling as scientific experts weighed in. The early reports included images of a crater, five feet deep and two feet wide. Witnesses described hearing an explosion, and the police recovered a black, pockmarked stone from the site, in southeast India. The chief minister of the state, Jayalalithaa Jayaram, promised compensation for the families of the driver, who was hit by debris, and for the other three people, The Times of India reported. At the college in the Tamil Nadu district of Vellore, the driver, identified only as Kamaraj, died of his injuries after window panes in the engineering building and on several buses shattered, officials there told the local media. Scientists from the Indian Institute of Astrophysics were analyzing samples of the rock provided by the police. “Considering that there was no prediction of a meteorite shower and there was no meteorite shower observed, this certainly is a rare phenomena if it is a meteorite,” said Prof. G.C. Anupama, the dean of the institute, in a telephone interview Tuesday. But NASA scientists in the United States were more emphatic, saying in a public statement that the photographs posted online were more consistent with “a land based explosion” than with something from space.

Well would you look at that. Turns out that dude didnt get hit by a comet. Just blew himself up with a bomb and India tried to cover it up. Its actually a ballsy move by India. Basically just banking on the fact that people would go “No fucking way. Where’d this happen? Oh, India? Alright makes sense.” I mean thats exactly what I did. Exactly what everyone did. It makes no sense. Its not like a celestial object ripping through the universe would know to single out India as the place to land. But plain and simple people in America dont get hit by comets, but people in India or China do. Just the way it works.

But people also blow themselves up with bombs in those countries too. Also a very India-y thing to do. So either way it makes sense, India just decided to play the Meteorite Card. Its a bold card to play considering its never ever happened before in human history. Like if you’re gonna say that, you better be able to successfully fake it. Get yourself some extraterrestrial materials or something so NASA believes it. X-Files style. Otherwise everyone is just gonna find out some dude blew himself up with a bomb.

You almost had us, India. You knew that people are forced to believe everything they hear coming out of India because your country is such a trainwreck. But not this time. You cant fake comet deaths.