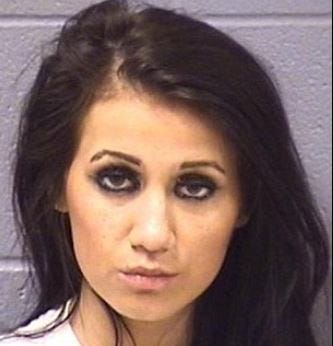 DM – A woman was jailed after she ‘intentionally sneezed’ in a bailiff’s face leaving a ‘trail of mucus’ in a Will County courtroom. Mellissa Estelle, 24, from Channahon, Illinois, was jailed on a battery charge, according to Joliet Patch. Estelle was in court Wednesday morning for a traffic case. The bailiff had to repeatedly reprimand her for putting her feet on the seats.Estelle was also speaking loudly while the judge was on the bench. Officials said Estelle ‘got up from her seat, approached the bailiff face to face, within three to four inches’.She then ‘intentionally sneezed’ into the bailiff’s face’.

Ah the old intentional sneeze in somebody’s face routine. High risk high reward maneuver. I mean if you execute this move perfectly it’s impossible to get in trouble for it. It just leaves your victim dead in the streets. Like the victim knows they just got intentionally sneezed on, but they can’t prove it. But if you push the fake sneeze routine too hard it can blow up in your face. That’s what happened here. Clearly her biggest mistake was that she needed to wait longer to do this.  You can’t get yelled at for talking loudly and having your feet on the seats and then just walk up to the Bailiff and fake sneeze in his face. Way too obvious. You need to obey his commands and sit there and stew over it for 25 minutes and then go ask where the bathroom is and then fake sneeze in his face. Don’t let them connect the dots. It’s fake sneeze 101 really.