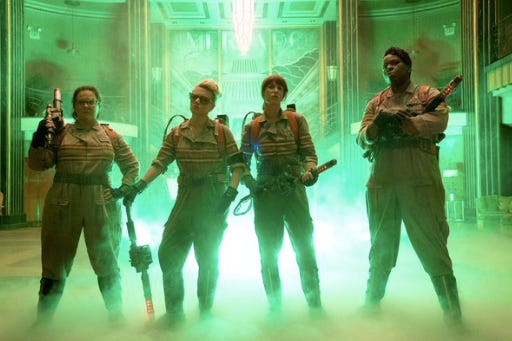 TheVerge – The Paul Feig-directed Ghostbusters reboot stars Melissa McCarthy, Kate McKinnon, Kristen Wiig, and Leslie Jones in the title roles. Where the first handful of shots showed the foursome on set, this pic shows them clearly about to face something scary. (Maybe even scarier than Zuul.) Ghostbusters hits theaters July 22nd, 2016.

Short Answer: No. No I don’t think it’s possible. The second I say I absolutely despise the idea of the remake, this photo, and every single aspect this movie I’ll probably be locked up and sent away to Sexist Island. Which sounds bad, but hey, at least people can dunk there.

But you know what? Kiss my dick. It’s not a woman bashing angle I’m coming from. Bridesmaids, another Paul Feig creation, was funny. I thought Trainwreck was legit one of the best movies of 2015. Tina Fey and Amy Poeler are hysterical. I’m not a woman hater one bit…I’m a Ghostbusters remake hater. You can’t take something this iconic from my childhood, slap some tits on it, and call it a franchise. Nope. Not on my watch.