THIS IS CRAZY #ALIENS pic.twitter.com/jGCvVjydkx

So as everybody knows we were invaded by Aliens on Saturday Night. I actually missed the end of the MSU Nebraska game becauase I was trying to get the Aliens to pick me up on my roofdeck.

Anyway all the critics were quick to say it wasn’t actually a UFO. First it was supposedly the remnants of a meteor shower. 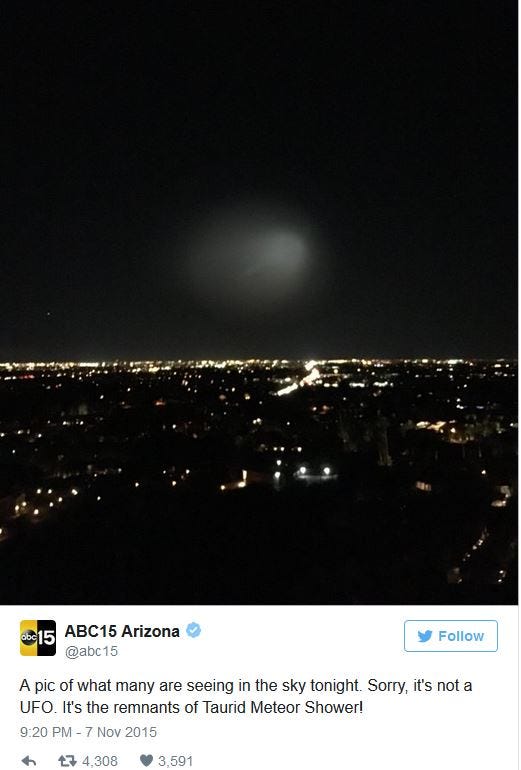 Then when that story didn’t check out the Navy said it was a submarine missile they fired across the sky for no particular reason.

Washpo - A mysterious light that rocketed across the Southern California sky on Saturday night, sparking fears of nuclear war, an incoming meteor and an alien invasion, was actually an unarmed missile test-fired by a Navy submarine. A Navy spokesman told the San Diego Union-Tribune that the projectile was fired from a ballistic missile submarine known as the USS Kentucky as part of an ongoing series of tests to ensure the reliability of the weaponry. Ryan Perry, a spokesman with the Navy’s 3rd Fleet, told the paper that the missile — a Trident II (D5) that could be seen as far away as Arizona and Nevada — was unarmed. He said information about such exercises is classified before the launch begins.

And that’s that. Everybody just moved on. I guess if the Navy said it wasn’t a UFO and they were just casually shooting missiles all over the place that must have been what it was. HEY AMERICA WAKE UP! WATCH 1 FREAKING ALIEN MOVIE FOR ME 1 FREAKING TIME! Area 51. Roswell. Ever heard of it? I mean read a freaking book! The government never admits aliens arrived on earth. That’s like the first rule of being a politician. Lie about alien invasions. Yet somehow everybody is just like “oh it was just the Navy shooting missiles in the middle of the night” Well the Navy may fool the fucks in the league office but you don’t fool me. The aliens are here and I’m mentally getting ready to be experimented on.  Anybody who doesn’t think I’m gonna thrive with the Aliens just isn’t paying attention.