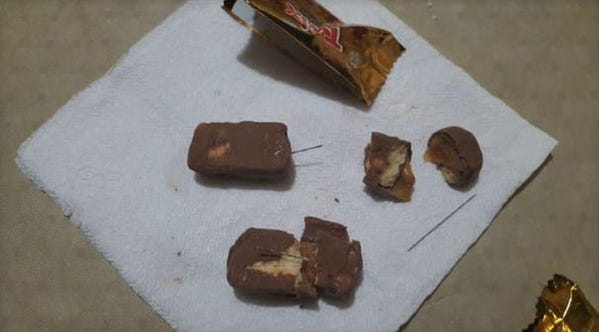 CBS – Police in Kennett Square, Chester County said early Sunday they were investigating reports of sewing needles found inside Halloween candy of several young trick-or-treaters. On Sunday afternoon, they said a 12-year-old child turned in a Snickers bar that also contained a similar sewing-type needle. The child had been trick-or-treating in the same area as the other children who reported tainted candy, whose ages range from 7-12.

Police say they were notified at midnight Sunday from someone claiming that chocolate candy bars handed out in the Stenning Hills area of the borough had been tampered with, according to CBS Philadelphia. Authorities say sewing-type needles were found inside five wrapped Twix Candy bars given to four different children who had been trick-or-treating door to door in the area of South Union Street and West South Street.

Now I already know exactly how this is gonna go. “Oh, would ya look at that? Just scumbag Philly people doing scumbag Philly things. Yada yada yada”. Well let me tell you something right now before everyone files this in their anti-Philly agenda. Because I, for one, think that this is actually a good look for the City of Brotherly Love.

When you live in Philly (and/or the surrounding area), you learn a few things much earlier in life than anybody else. And one of those things is that there’s no such thing as a free handout. And what better way to teach the kids that lesson than by throwing a few sewing needles into their Halloween candy? It like, what, you think that just because you threw on a costume that you deserve all the candy in the world? Grow the fuck up, kid. Sometimes in life you get a delicious 3 Musketeers bar and sometimes you get a few needles in your Twix bar. But that’s just the way it goes. The sooner you realize that, the better. Not everything in life is just going to be handed to you perfectly with a nice little bow on it. But that’s what Halloween teaches these kids and Philly is just here to blast everyone with a healthy dose of reality checks. So feel free to bash on Philly all you want, but when your dealing with little entitled pricks every where else in the country because they think that they deserve needle-less candy everywhere they go, just think back on this moment and you’ll know what I’m talking about.

Sidenote: Is Halloween the most socialist holiday there is? You could have spent so much time as a kid coming up with the perfect costume and then that little snot-nosed brat Johnny from down the street could just throw a bed sheet over his head, call himself a ghost and the 2 of you end up with the same amount of candy at the end. It’s bullshit, I tell ya.