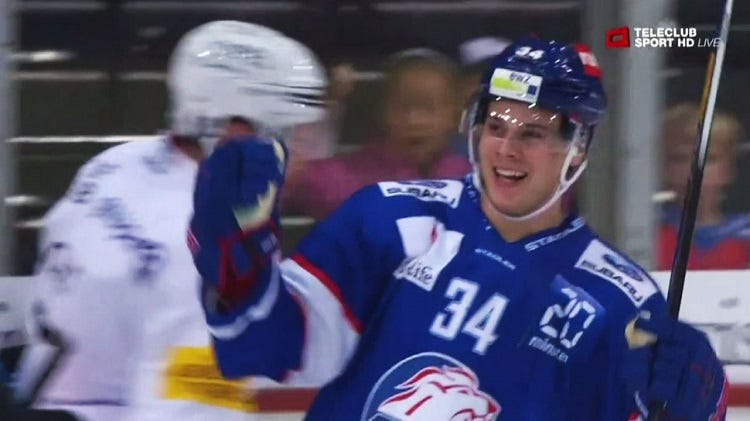 The 2015-16 NHL regular season hasn’t even started yet. The top two picks in this year’s draft, Connor McDavid and Jack Eichel, haven’t even played a single second of a meaningful NHL game yet. But it’s never too early to start getting yourself ready for the Next Next One. And that’s what we have heading into next year’s draft with Arizona native Auston Matthews coming up the ranks. Matthews is unanimously considered the #1 prospect to come off the board at the 2016 NHL Draft and like McDavid and Eichel, he is considered to be a can’t-miss, franchise altering type of talent. But instead of playing major juniors up North or playing NCAA hockey like top North American prospects typically do, the 18-year-old decided to head over seas to play professionally in Switzerland with the Zurich Lions. And yeah, the kid is doing just fine.

Here’s Matthews leading the rush and scoring his first professional goal in his Swiss league debut earlier this month. The goal game just one day after his 18th birthday and he wasn’t even allowed to sign with the team until he turned 18 (now he’s making $400,000 after taxes as a high school senior…). Sure, it may not have been a huge highlight reel goal but the way he moves through the neutral zone with the puck on his stick is a thing of beauty and he gets himself in spots where scorers know how to score. So he’s got blazing speed with the puck on his stick and he also carries around a sniper out there.

So sick. That release was filthy and through just 4 games in the Swiss league, Matthews already has 5 points on 3 goals. Again, he literally just turned 18 and he’s out there playing with grown ass men who have mostly all played in the NHL at one point or another. (UPDATE: As I’m writing this post, Matthews just scored again to put his team up 2-0 against EHC Chur today so make that 6 points on 4 goals). The kid is going to be a stud and if the Hockey Gods are real, then hopefully the Edmonton Oilers aren’t complete dog shit this year so that they can’t get their grimey hands on this kid. Need him to stay in America. Need him on the Flyers.