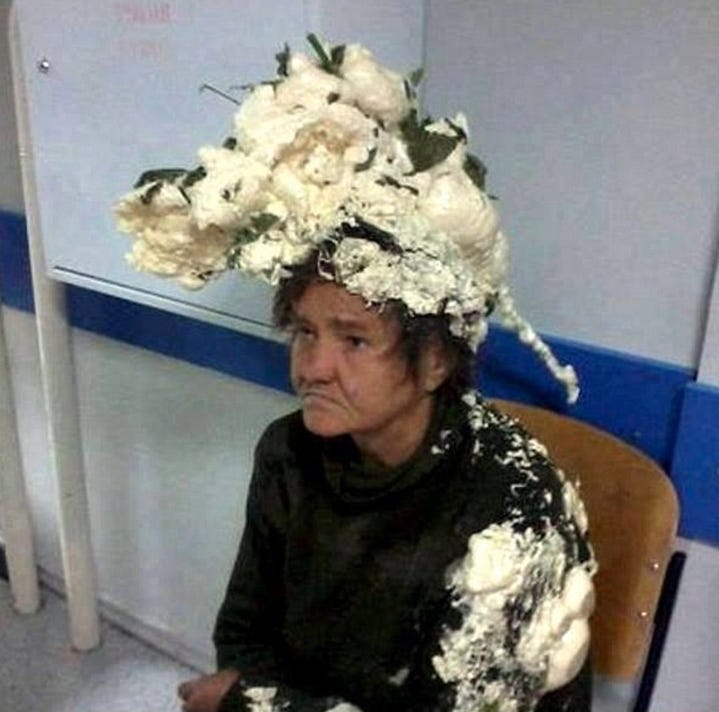 Daily Mail – This picture proves once and for all how important it is to read the label on the can. It shows a mystery woman who reportedly ended up in A&E after confusing her hair mousse with a can of expanding builder’s foam. The image, believed to have been taken at a hospital somewhere in Eastern Europe, has been widely shared on social media on Tuesday. She can be seen sitting in a waiting room looking understandably unhappy with her situation with a giant solid helmet of polyurethane foam on her head. Expanding polyurethane foam has a number of uses in DIY situations – although ‘hair product’ is not one of them  Builders’ and at-home-handymen used the foam for everything from preventing leaks, to filling gaps during construction and holding items in place.

Real, fake, who knows. Bottom line is this picture is an A+ and it believable for 2 reasons 1) Shes a chick and 2) She’s Eastern European. That combo right there? Anything is possible. The smartest chick that you know is still capable of doing the silliest, dumbest, most asinine things in the world. Its just part of female life. Sometimes their brains just completely turn off. Now take the smartest Eastern European woman you know and thats how you end up looking like this. “Oh this looks like my hair mousse, whoops its some Billy Mays expanding foam product!” Silly me. Now I look like the Pigeon Lady from Home Alone when she’s covered in bird shit!