Lil’ Lightning – I mean, what else needs to be said. Darren Sproles is sneakily the MVP of this team. He had a dropped pass that was a GIMMIE of a long TD, but other than that it was a perfect game by #43 – A game that wouldn’t have been won if it wasn’t for him.

The Offensive Line – Hey, maybe it was scheme. Maybe it was them sacking up. It was probably a little of both. But you can’t deny the improvement from the boys up front this week. Mathews rushing over 100 and Bradford only getting sacked once (and generally under very good protection all game) says it all. They came, they saw, they conquered. Andrew Gardner in a walking boot hurts, but hopefully the issues with the OL have been fixed.

The Replacements - Rookie ILB Jordan Hicks is looking like a STEAL as a 3rd round pick and is playing well out of his shoes. The dude played all 79 snaps, had 9 solo tackles, recovered a fumble, and added a pick. The Eagles are are going to have a GREAT problem to have once Kiko and Kendricks are healthy. There are shades of the Axman in this one.

Suck a fat one, Mosher –

ERIC ROWE IS FINALLY HERE AND HERE TO STAY. Also, 30-year-old journeyman Brandon Bair was a certified beast filling in for starter Cedric Thorton. Guess Chip knows a thing or two about his Oregon boys.

VERY LITTLE PENALTIES – Only 5 penalties for 21 yards. A very underrated improvement from the Golden Shower flag show we saw the first two weeks.

The Defense, for the most part – Aside from a final 2-min drive in the first half and Brandon Marshall gashing his way through the secondary at times, the D played very, very well. When you only give up 47 yards on the ground that tends to happen. Malcolm Jenkins is playing like an All-Pro. Fletcher Cox and Bennie Logan are playing ANGRY. Nolan Carroll had multiple textbook coverings and Walter Thrumond III is, by far, the biggest surprise to this team.

Shit, even Byron Maxwell did a better job (THANK YOU VERY MUCH BILLY DAVIS FOR RECOGNIZING THE ISSUE AND GIVING HIM HELP OVER THE TOP FOR MOST OF THE GAME). 4 TO’s and only 17 points given up. I’ll take my chances with both of those stats every single week. This D is currently the heart of this team.

Special Teams – Perfect with a TD to boot.

Connor with the Rope-A-Dope:

Sammy B - Yet AGAIN, I didn’t think Bradford played that bad, but he still didn’t play good enough. There were a couple throws that were just…off. The overthrow to an open Miles Austin on 3rd down in the endzone on the first drive. The under throw that made Ryan Mathews turn around on the wheel route that was a guaranteed 400 yard TD (still should have caught it, but Bradford had to lead him a lot better). There isn’t a QB controversy and I’m OK with Bradford’s play, but still, he’s gotta be better if we’re going to get to the promise land.

Coaching – Again, it’s a tale of two halves. Props to Chip for kicking the tires and starting the fires from the jump, but 0 2nd half points is not going to get it done. This game should have been a bloodbath and came dangerously close to me hosting my own personal bloodbath with some rusty razors in the tub. Figure it out and coach a full 60, man.

Eagles Hoochie Slapping The Shit Out Of Jets Fans – Not condoning, but it was probably well deserved. Plus she’s got a tush on her that’ll serve honorably until the 3rd Delco kid is shat into the world.

DROPS ON DROPS ON DROPS – Another week, another game riddled with more dropped balls than a middle school after party. Ryan Mathews (twice) and Sproles each had perfection in their hands. BE SOMEBODY. Everyone needs to start jacking off elephants. Get on it, Chip.

WR (?) Play – And I put the (?) there cause did anyone actually play the position other than Jordan Matthews? 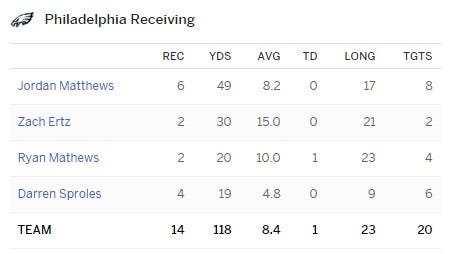 Miles Austin is allergic to the football. Josh Huff is non-existent (not playing is the definition of non-existent). The Nigerian Nitrous can’t get open. Riley Cooper is essentially just a blocker. This all needs to improve.

And that’s that. On to those scumshits in Washington. NEVER FORGET: