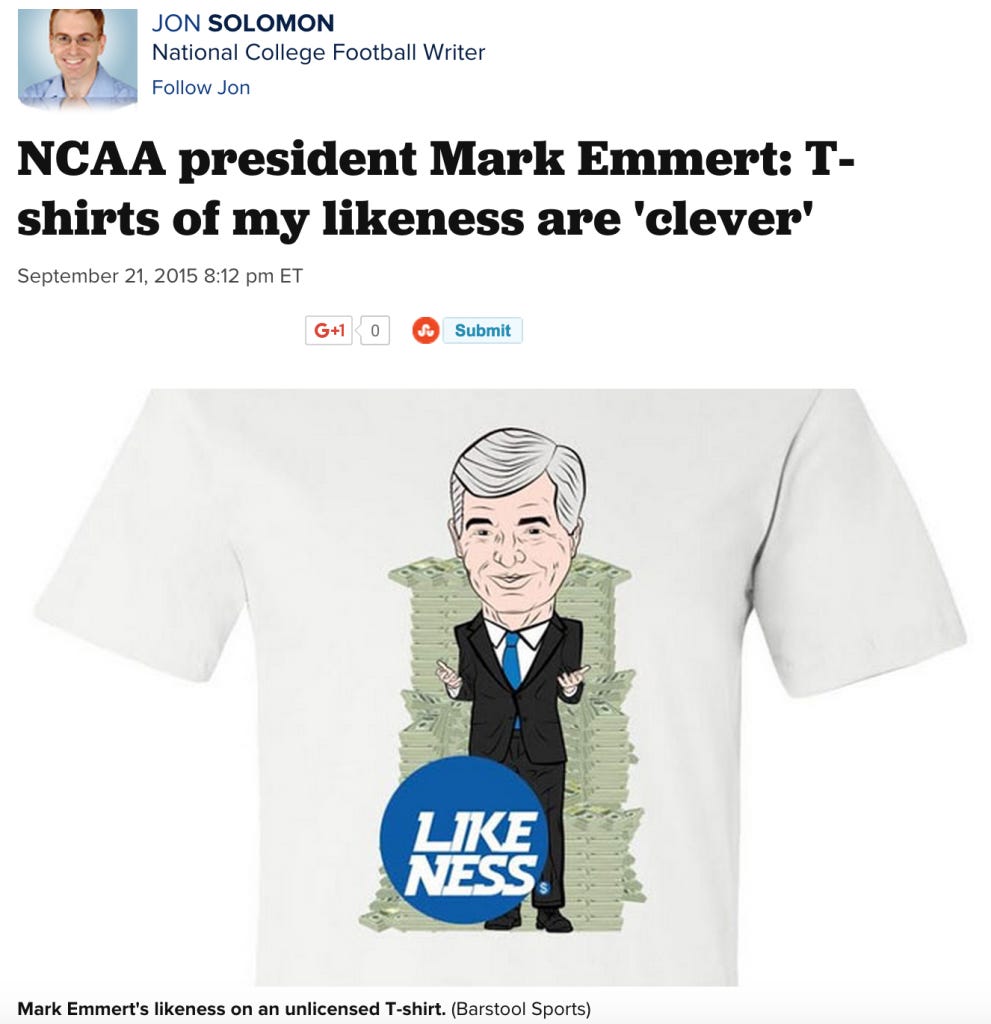 Well, the shirts have officially infiltrated the murky consciousness of Mark Emmert. On top of that, the President of the NCAA also took the time to not engage with me by offering several comments about our Likeness Line. In response, I plan to give the leader of college athletics the respect he deserves by going through his comments one at a time.

“I thought it was funny”

Off to a good start here. I agree Sir.

“I won’t be engaging with him”

Shoot. I was really hoping he’d elaborate a little bit, but I suppose if he’s not going to comment on it any further, then that is that. If there is one thing we all can agree on it’s that if Mark Emmert says it, it’s true.

Okay then, let’s talk. So you can’t imagine it’s a hot ticket? Well, first I guess we need to be specific about the spectrum of “ticket heat” are we even talking here. Are we comparing the Likeness shirt’s “ticket heat” to the College Football National Championship’s “ticket heat?” Because if we are, it is really gonna put a damper on this whole thing for me. Don’t get me wrong, we’ve sold a good number of shirts so far, but I have no choice but to concede this one to President Emmert. He’s right—the sale of one Likeness shirt does not bring in enough money to pay tuition at the University of Florida for three entire years like one ticket at his National Championship game does ($17,979.00).

So, I suppose comparatively speaking—the Likeness shirt is not a hot ticket.

Okay, let’s not be ridiculous. Do you really think I would try to make an entire career out of illegally selling the likeness of only one person? Come on Mr. President, I’m not that naive. This is just the beginning for me. One day I hope to follow in your footsteps and make millions and millions of dollars running a tax-exempt, non-profit organization that exploits thousands of employees every year. How you ask? Just like you, silly—by saying they’re not employees! So what if they are the ones putting the marketable product on the table? Who cares if they would be considered employees by every standard in every other category of the American marketplace! Laissez-Faire Blasé Blasé Rae Sremmurd… Nobody knows what all this stuff means!! Just call them “student-athletes” and it doesn’t matter how many hours they work or how many millions they bring in—one thing they are NOT is employees!

“I thought it was clever.”

You can buy one here!!