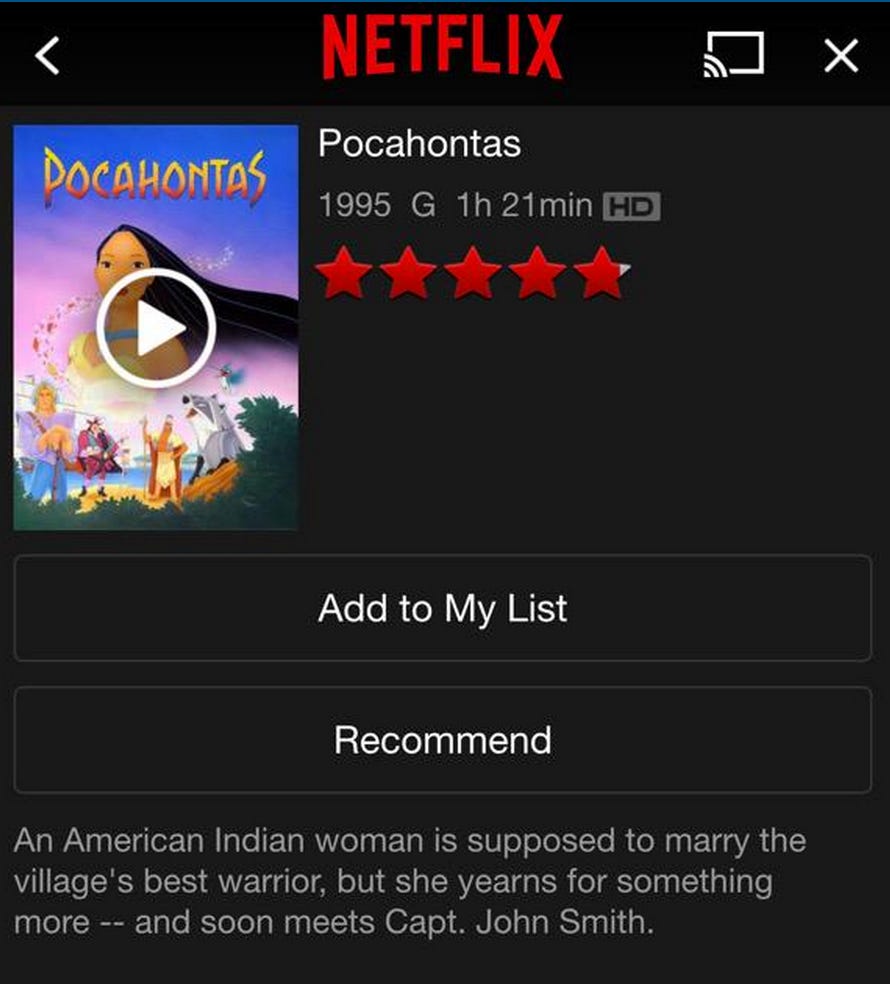 The Guardian – The video-on-demand provider Netflix has rewritten its description of the Disney film Pocahontas after it was accused of sexism and reinforcing gender stereotypes. In a post on the Native Appropriations website, an online forum for “discussing representations of Native peoples, including stereotypes, cultural appropriation, news, activism, and more”, writer Adrienne Keene recounted how Netflix altered the wording of its plot summary in response to a series of tweets in which she complained about the site’s description of the film.  Netflix’s original version read: “An American Indian woman is supposed to marry the village’s best warrior, but she yearns for something more – and soon meets Capt. John Smith.” Keene’s argument is that “the description reads like a porn or a bad romance novel … The use of “woman” and “yearns” is so … gross. Shudder. The problem? It overly sexualises the film, and only positions Pocahontas in relation to her romantic options, not as a human being, you know, doing things.”  She then went on to write: “I also want to make explicit the colonial white supremacy embedded in this description as well – of course Pocahontas wouldn’t be content with her backwards Native ways with her Native man … she yearns for something more. SPOILER ALERT: It’s a white dude.” A week later, Keene received an email from Netflix, which she posted on Twitter. It read: “We do our best to accurately portray the plot and tone of the content we’re presenting, and in this case you were right to point out that we could do better. The synopsis has been updated to better reflect Pocahontas’ active role and to remove the suggestion that John Smith was her ultimate goal.” The updated description of the film reads: “A young American Indian girl tries to follow her heart and protect her tribe when settlers arrive and threaten the land she loves.” In another post on Native Appropriations, Keene wrote: “[I am] not railing against the film Pocahontas, which I can save for another time, but a discussion of the importance of the words we use, and the ways that insidious stereotypes and harmful representations sneak in to our everyday lives.”

Out of all the fake outrage…all the phony anger and shock…this has to be the one. This has to be it. Being offended by a 20 year old cartoon Disney movie description. There is NO possible way this woman actually feels this strongly about this one sentence description of Pocahontas. Its physically, humanly impossible. I dont think the human mind, heart and soul can actually muster up this much concern about the goddam description of Pocahontas on Netflix.

Let me ask you a question – what the fuck else did Pocahontas do besides end up banging John Smith? Nothing. Thats right. Nothing. Pocahontas ran around the woods with a raccoon singing about the blue corn moon, whatever the fuck that is. Is that what you want the description to read? Because that doesnt put asses in the seats. A young girl being forced into a marriage she doesnt want and finding love in a strange place with a man of a different background, thats what puts asses in the seats. You know what else puts asses int he seats? Just about any fucking cartoon with colors and songs and noises because we’re talking about a CHILDREN’S ANIMATED MOVIE.

I’d actually be so pissed if I was a doctor or professor or whatever of Native Appropriations and this is how I made my headlines. This was the big mark I left. Put that one on the resume. “Got Netflix description of Pocahontas changed.”