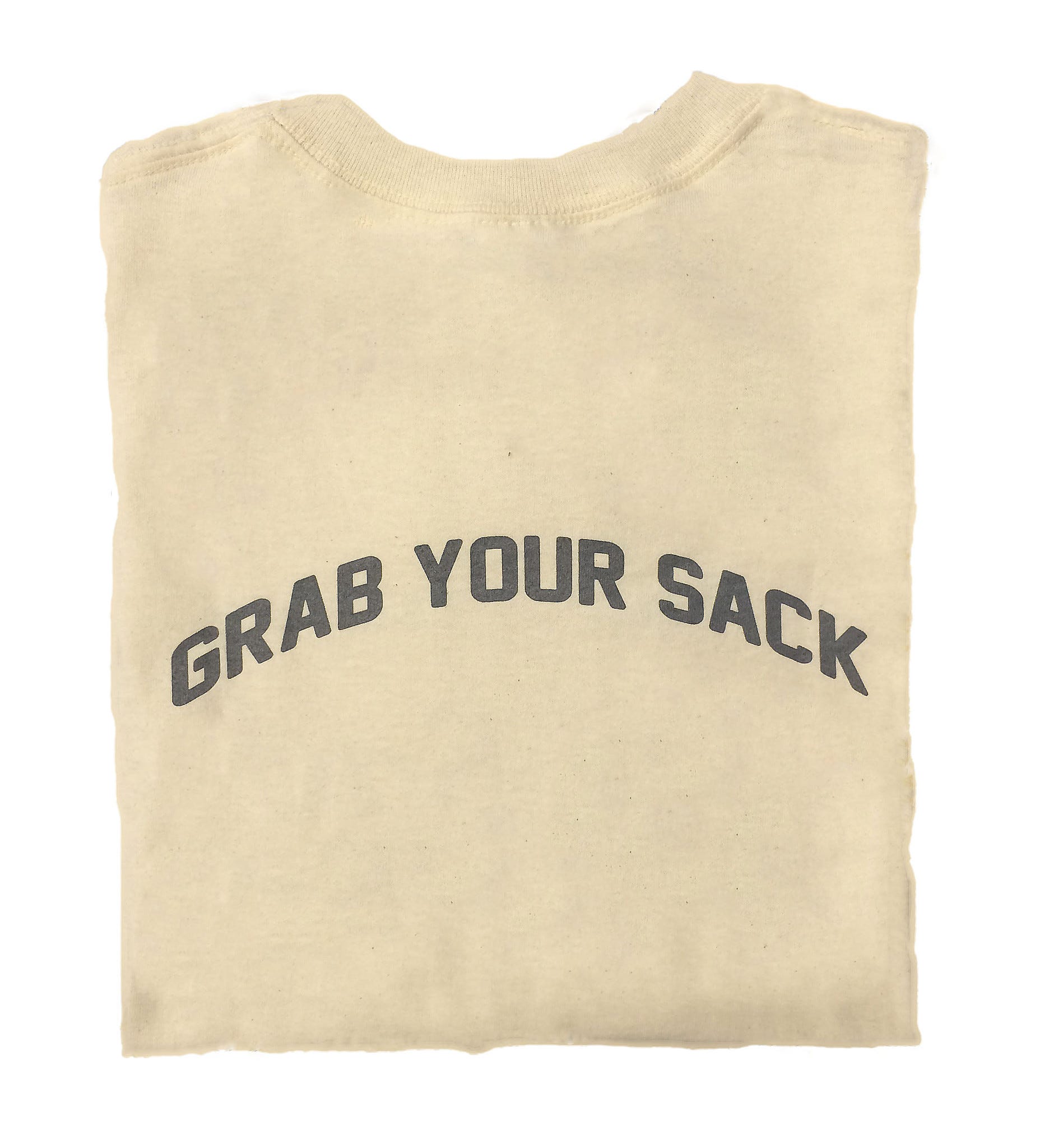 You heard it here first, America. Am I a batshit crazy homer whose vulnerability from a lifetime of losing made me fall victim to the brainwashing of Chip’s Reich? Probably. But I’ll be bold enough to take my sack out and put it on the table when nobody else will. The Philadelphia Eagles will be the 2015 NFC Eastern Divison Champions.*

Look, I’m not naive enough to say the Eagles are a good team right now. They’re not. In fact, if they come out like they did the first two games this team would have trouble beating a D-III school for the blind. This offensive line couldn’t block Walter White Jr. if he wanted to crutch his way through the A gap. These millionaire bums and coaches are 1-5 in their last 6 regular season games with their only win being that meaningless exhibition vs. the Giants. Other than the Cowboys game on Thanksgiving, the Colts game on MNF, and the Dallas game in 2013 for the Division, it’s very safe to say Chip Kelly has not won a game he should have lost in the NFL. There’s a LOT of reasons to doubt where I’m coming from, but I’m not (completely) talking out of my ass here. There is reasoning to believe the Eagles will bounce back to win the East.

They’ve Been Here Before:

Remember two years ago when the eventual NFC East Champs were 1-3? Then remember after that they were 3-5 following two HORRIFIC division losses at home to the Cowboys (17-3) and Giants (15-7) where Chip’s almighty scheme didn’t score an offensive TD? Yeah. Everyone wrote off the Birds and was offering to drive Chip across country to take the USC job. Well, Chip and the boys answered back by winning 7 of the next 8 and clinched the division on the final game of the regular season at Dallas. Sure, they shit the bed last season after going 7-2 then 9-3, but they still were good enough to be 7-2 and 9-3. This team is not the 0-2 squad they’ve shown to be.

The NFC East Is A Walking, Talking Abortion:

Let’s face it, the Eagles are playing bad, but the rest of the division may be in for the longer haul. Dez and Tony will be spooning in the hyperbolic chamber together for weeks. The Giants are also 0-2 while a fat guy in a Babylon-5 t-shirt at the bar can close better than Eli Manning right now. The Redskins, albeit have been playing tough, are – as SVP stated – the Redskins. This division is WIDE open as of now and a 9-win effort should be enough to clinch this bitch.

The Eagles Have A Relatively “Easy” Schedule: 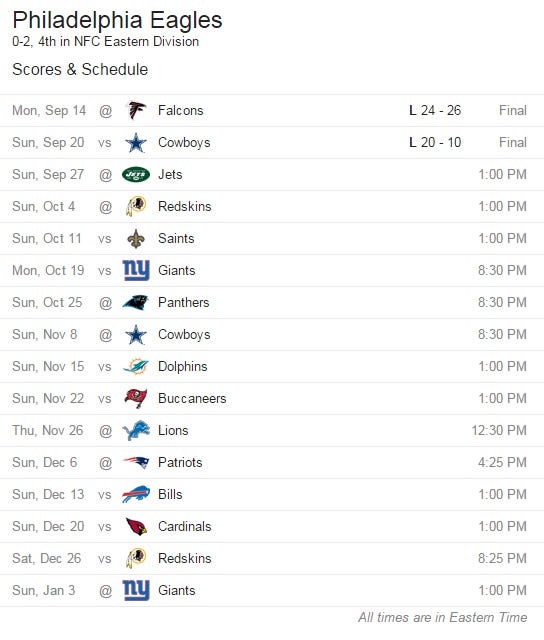 It’s the NFL. No single game is guaranteed. But there’s no reason why the Eagles can’t be 3-3 and right back in the thick of things by mid-season.

Everyone has already written them off (via PFT): 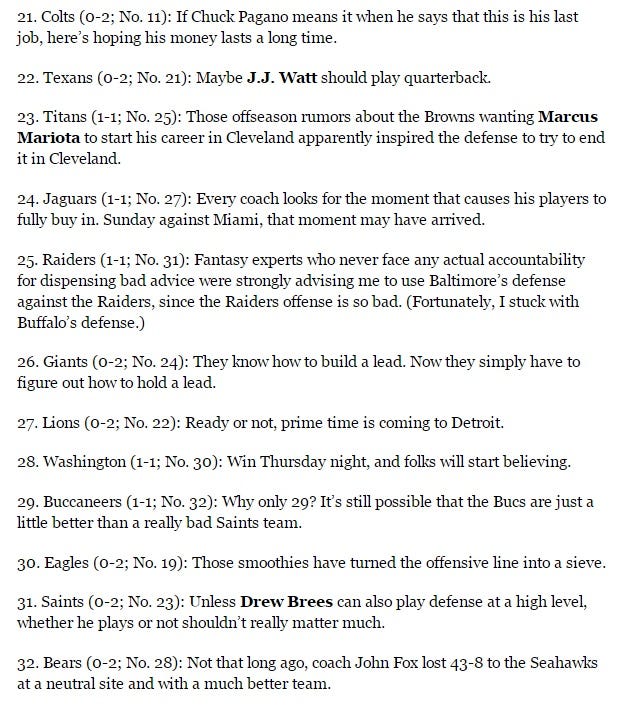 Does this mean anything? Maybe, maybe not. Most of the national media who was ballwashing this Eagles team in the pre-season have collectively broken their shit hopping off the bandwagon. But I’d rather be the underdog trying to prove people wrong than the favorite with the pressure of proving everyone right. Hopefully being ranked below the Jags, Bucs, Raiders, and Browns awakens the sleeping giant that lives inside Chip Kelly’s testicles.

Lady Luck finally may be goosing the Birds:

LB Kiko Alonzo I'm hearing has ACL sprain but not tear could b out 2-4 wks. #Eagles .. More on Michael Kendricks injury Con't ….

Kiko still may be out for the year, but he only may be out for 2-4 weeks. We’ll see, but this would be big if he can come back and contribute like the light beast he is.

Chip Kelly Is A Winner:

Yeah, yeah, yeah – He’s never won the big one at any level. But you don’t rise the ranks from OC at a D-IAA school to HC of a D-I NCAA powerhouse to a NFL head coach in such a short period of time without bathing in success. You just don’t. Not in football, not in life. This man has won at every level, including the NFL (don’t discount 20 wins in 2 years). If Chip is as much of a schematic genius as football insiders claim, this Titanic will be repaired and back on course towards destiny. NOW.

So there ya have it. I guess if it doesn’t turn around, well, then I’ll take the SVP high road and admit you are smart, and I am not. Even though we know that’s the case going in, anyways.

*Not that it matters. Even if they get into the dance it’ll probably be a one and done scenario. This team stinks, but the Division smells worse.