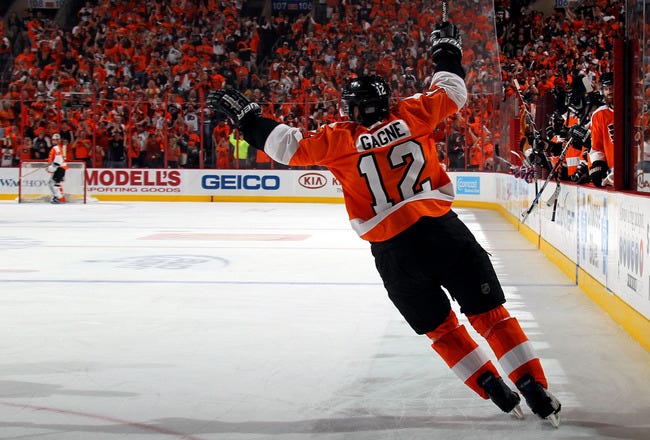 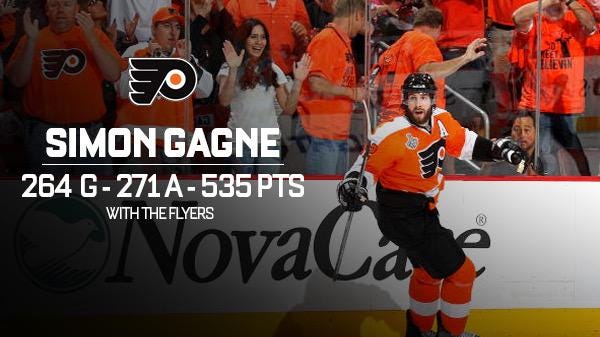 Simon Gagne was always a fan favorite when he was here in Philadelphia. It was almost impossible to not love the guy. He wasn’t a man of many words, but he just played the game with a ton of heart and he knack for scoring. Anyone who has ever played NHL 2010 with the Flyers has heard the sentence “Peter Forsberg once told me that Simon Gagne was the purest goal scorer he ever played with” a million times. He may not have any outrageous career numbers due to a nagging groin injury which seemed to last his entire career, but he was always so much fun when he was on.

Gagne came to the Flyers right at the end of the Eric Lindros era. He was on some great Flyers teams during his 11 years here and he was also on some pretty dogshit Flyers teams as well (i.e. – that ’06-’07 team that decided to go out and have the worst record in the league and missed the playoffs for the first time since ’94). But even during those few years where the Flyers were a total joke, Gagne was still a ton of fun to watch. And then, of course, you had the 2010 playoff run.

Down 3-0 in the series to the Bruins. In overtime with the season on the line, Gagne puts himself in a scorer’s position and keeps the playoff run alive sparking the Flyers to comeback and win 4 straight against the B’s to take the series. That was just classic Gagne right there. He knew where to be on the ice and he knew how to put the puck in the back of the net. Never anything too fancy, he was just a goal scorer out there.

So now we look back at that 2010 team that went to the Stanley Cup Final and the players are quickly dropping this summer. Chris Pronger, who doesn’t even play anymore, was traded to Arizona for Sam Gagner (that shouldn’t get confusing at all this year). Kimmo Timonen retired after winning the cup with Chicago. Dany Briere retired after brief stints in Montreal and Colorado. Mike Richards had his contract terminated by the Kings after winning two cups with them. And now Simon Gagne, who won a cup with Richie in LA, is hanging up the skates. Giroux is the only one left in town from that team, and for the love of god, let’s pray that he’s on the next Flyers team to make it to the Stanley Cup Final as well. 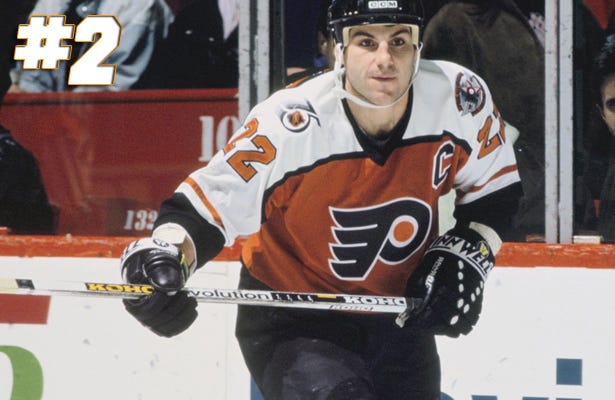