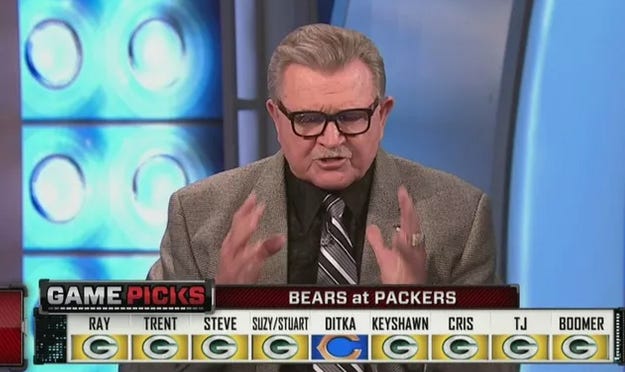 Let’s start from the top. The Packers own us. OWN. Aaron Rodgers is my daddy, it sucks to type that but it’s the truth. Rodgers is something like 27,271-1 agains the Bears. That Sunday night game last year when the Packers but a billion points in a single quarter was embarrassing and disgusting and demoralizing. But that was all the past, and as a wise man once said “those who live in the past are cowards and losers” (that wise man was Mike Ditka, ever heard of him?).

So today, why do I think the Bears will win? 5 easy reasons.

1. This coaching staff in general, Vic Fangio in particular. I know the roster is still depleted and has major holes, and I’m not saying the Bears are good because they aren’t, but just the fact that we have NFL caliber coaches coaching our football team means something. Can you think of one time in the Mel Tucker era that the Bears gang tackled a guy with the ball? I can’t. No heart, no fight, nothing. Now we’re getting back to fundamental football, I truly believe that alone will make this respectable.

3. Everyone in America has Green Bay in their teaser. The idiot down the street who never gambles probably saw the Packers at -6.5, created a Bovada account and threw it in a teaser with the Cowboys tonight. When this happens it never works out. They keep building hotels in the desert for a reason.

5. Because nothing ever makes sense in the NFL.