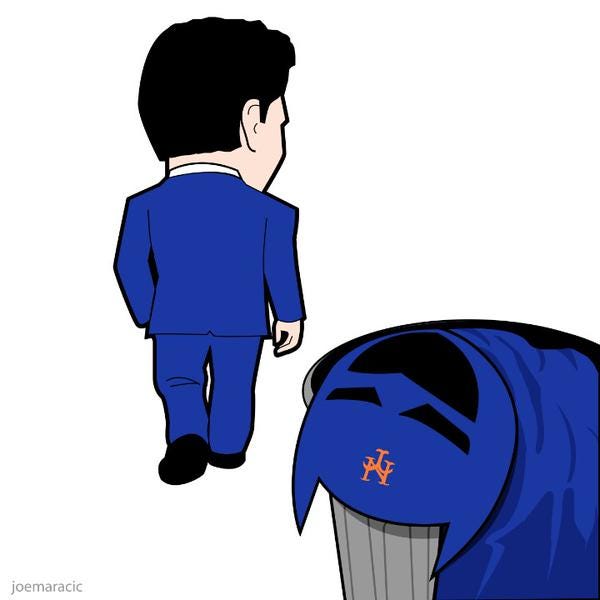 USA Today – A person familiar with the Mets’ plans told USA TODAY Sports that after Harvey pitches Tuesday, he would be skipped in his next scheduled start, start one more time and wouldn’t make another regular-season start unless needed on the final weekend of the season against the Nationals. The person spoke on the condition of anonymity because of the sensitive nature of the topic.  And if the Mets make the playoffs, he won’t start more than once during any potential playoff series and perhaps could be limited to no more than 60 pitches in a start. “I can’t even tell you what I’ve proposed is going to be acceptable,” Alderson said. “Let’s wait and see what happens.” Said Collins: “Matt and I talked at length. You can talk postseason all you want. We’ve got to get there. “And he’s going to be a big piece to get there.” But let’s be clear here. The Mets might not get to the postseason without Harvey. The Mets can use a six-man rotation all they want and start Harvey only once after Tuesday, but the rotation is fragile without him. Jon Niese, who was lit up again Monday, has a 10.53 ERA in his last four starts. Steven Matz is a rookie who has made one start since July 15 and left his last start with a blister. Logan Verrett, who would replace Harvey in his skipped starts, has one major league start in his career. And Bartolo Colon is 42 years old. The Mets need Harvey if they are to reach the playoffs for the first time since 2006. If they win the NL East and Harvey is available to pitch in the postseason, all would be forgiven.

So after a dramatic weekend of miscommunication, he said she said, two face heel turns, and everyone talking out of both sides of their mouths, the Mets and Scott Boras finally devised a “plan” for Matt Harvey’s future.

And let me tell you folks – it’s the worst fucking plan in sports history. Matt makes his next 2 starts, beginning tonight, his third remaining start only if the Mets need him (because of course this franchise is already looking past the end of the regular season. As the perennial playoff powerhouse we are, only makes sense) and then in the playoffs he’s only limited to one start per series WITH A 60 PITCH LIMIT.

Let’s ignore how dumb it is to take the regular season for granted. Let’s even ignore Harvey pitching only once per series. I mean, hey, at this point Matt Harvey is not the guy we thought he was. We wanted a dude to take the ball 1, 4 and 7 if necessary and he’s not that guy. And let’s, for arguments sake, believe for a moment that the completely arbitrary innings numbers actually were gospel and Matt Harvey’s arm will explode after 180. Lets take all that as a guarantee. But This SIXTY PITCH LIMIT is a JOKE. Either you’re preserving Harvey for the future or you’re trying to make a run deep into the postseason. Either Boras wins and the Dark Knight is actually just businessman Bruce Wayne. Or the Mets get the ace that Matt Harvey has portrayed himself as the past couple years and he’s pitching in the playoffs. But this half in, half out bullshit is a total joke.

It does absolutely nothing for either party involved. Do you think skipping starts and now only throwing 60 pitches is going to save Matt Harvey’s arm? 59 pitches you’re OK, 61 pitches AHHHHH you’re DEAD! Not to mention that pitchers these days are such creatures of habit that if anything, changing the way Matt Harvey has done things for years now probably puts him at risk. And from the Mets point of you, you think having a starter on a 60 pitch limit helps? Lets hand the ball to our ace! Annnnd after 3 and a third matt Harvey departs. It taxes the bullpen and it completely fucks up what this team is doing. Unless we’re using Matt Harvey in the pen, which revert to point number 1 – doesnt achieve the goal of resting him.

Its one or the fucking other. Period. And I’m not a child and I know its a business and I know Harvey shouldnt have to risk his money if he doesnt want to. But this half and half idea is only going to fuck over both parties involved. Either be the old Ricky Vaughn or the new one. Cant have one foot in one foot out, Matt.

And as for the Mets. I know this is impossible. I know you probably cant do this. But if there truly is some ridiculous 60 pitch limit in the event this team, God willing, makes it to the post season, I dont even think its worth it carrying him. 60 pitches is worse than 0 pitches in my eyes. I’d rather just Strasburg him and shut him down completely than totally fuck over the already crappy bullpen on the Matt Harvey “starts.” You’re either in it to win it, 100% with this team trying to win a World Series, or youre not. And if you’re not, fine. We’ll see you in 2016. Your reputation will never be the same and you wont be the cornerstone ace we always wanted you to be, but we’ll figure that out later. Still a talented pitcher, still a very valuable piece of the team. You just turned out to be more corporate and more about the money than we expected. Its not the end of the world, but a potential game 3 NLDS outing after facing Kershaw and Greinke where you throw 60 pitches, take yourself out of the game, and the pen needs to pitch 4 or 5 innings and is totally fucked will be the end of the world. There will be no coming back from that.

All or nothing homie.