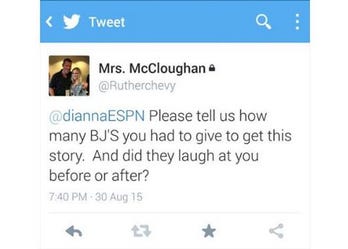 This has been bouncing around Redskins Twitter a little bit today. The word going around is that account is Scot’s wife going after ESPN’s Dianna Russini. It appears, though not confirmed, Mrs. McCloughan had a little too much wine with dinner and went after Dianna for breaking the Kirk Cousins is the starter story before the team did. And miraculously the account is now deleted off Twitter. Black Sports Online wrote:

Maybe even stronger evidence is that the account in question has been deleted off Twitter. Normally fake accounts want the attention and to fool people. Real accounts try to stay private and delete stuff when they have been caught. So, after some digging and a couple of calls. I can confirm it was indeed a real account and a real tweet. Mrs. Mccloughan was told to delete her twitter account immediately once the tweet started floating around Twitter.

I’m being told Redskins PR is claiming the account is fake. But like, what is Redskins PR going to say? At the end of the day, who gives a fuck one way or the other? It’s just going to be on all the blogs in 4 seconds, so I had to blog it. I don’t think it’s a big deal at all, Scot’s a wild card so it only makes sense his wife is too. That’s what I love to see in my GM. Of course Dianna doesn’t deserve to be treated like that for breaking a story about Kirk Cousins (if it’s actually Scot’s wife, nonetheless) so that’s a bit fucked up.

Is it real? Is it fake? It’s just Redskins.