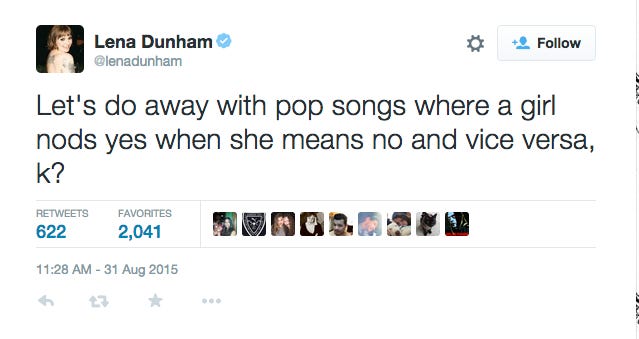 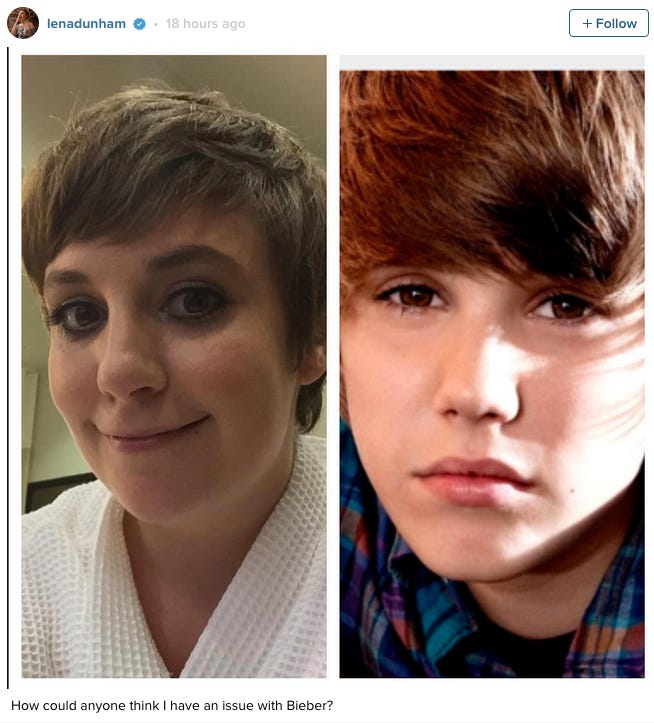 Hollywood Reporter – Dunham is referring to the song’s chorus, where Bieber sings, “What do you mean? / When you nod your head yes / But you wanna say no / What do you mean?” Justin Bieber’s new single, “What Do You Mean,” received plenty of hype before its Aug. 28 release, and now that the song is out, it’s getting even more attention. One person who isn’t so hot on the new track, though, is Lena Dunham. The actress subtweeted her discomfort with the tune’s lyrics Monday (Aug. 31), suggesting that “What Do You Mean” alludes to rape culture and asking to discontinue the release of problematic songs like it.

Yo serious question. How does Lena Dunham live every day like this? Not only does she have to wake up every morning and look like a giant bag of milk, but its gotta be EXHAUSTING living your life this uptight. For real I dont even know how feminists deal with constantly worrying about every fucking thing they hear or see being related to rape. Honestly doesnt that sound like some sort of disorder? Like everywhere Lena Dunham looks, she sees rape. Every song a feminist hears, every article they read, every TV show they watch, rape, RAPE, RAAAAAPEEE. They are legitimately the ones who have some sort of psychological issues when it comes to sex.

I mean this song is COMPLETELY harmless. Its a song about how girls are fickle and always change their mind and dont know what they want. There have been A MILLION songs about that. A million movie storylines about the boy chasing the confused girl. A billion stand up comedy routines about how guys are always trying to please girls but they’re so indecisive and confusing. In a weird way its actually like the most endearing part about the boy-chases-girl relationship, which pretty much makes the fucking world go round. And Lena Dunham listens to “when you nod your head yes / But you wanna say no” and shes like “GIRLS ARE GOING TO BE RAPED NOW!” Thats not fucking normal. Its probably because she fingered her sister when she was 7 years old or whatever the fuck that story was about.

When I ask my wife “Do you want to eat Five Guys for dinner?” and she says yes but I know she absolutely means no because shes gonna complain about it being unhealthy as soon as she eats it, thats what Bieber is talking about. When she says “Sure, go out with the boys and have fun” and I know she absolutely doesnt want me out having fun without her, thats what Biebs is talking about. Now, there definitely is some times when I ask my wife if she wants to have sex and she says yes but I know deep down she doesnt really want to because she “just went to the gym” or “hasnt showered” or something, but I capitalize anyway.  Does that prove Lena Dunham right? I dunno I guess so. Whatever bitch. I’m not a rapist.

Bottom line is it must SUCK for Lena Dunham to listen to “What Do You Mean” and all she hears is RAPE RAPE RAPE. That shit is a bang piece.

PS – How about the John Leguizamo cameo in this weird ass video!