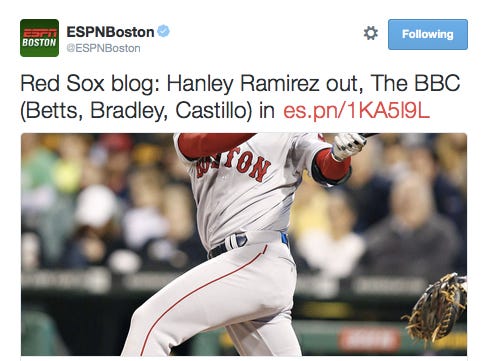 Hanley is never allowed in the outfield again. I can deal with him playing a terrible left and surrendering countless runs, but I cannot deal with him ruining a great nickname. I won’t stand for it. JBJ, Mookie and Rusney are the better outfield on talent alone, but when you mix in the headlines that will be made possible by “The BBC” then it’s a no brainer. “The BBC really hurt the Yankees last night.” “All of the BBC went deep on the Rays Wednesday.” “Orioles try, but the BBC is too much for them to handle.” It’s perfect. Long live the BBC!

Oh and just an FYI, the BBC is already fucking the Yankees in the ass tonight. JBJ single followed by a Mookie blast.

Update: More BBC action. If you value your life, do not run on JBJ.