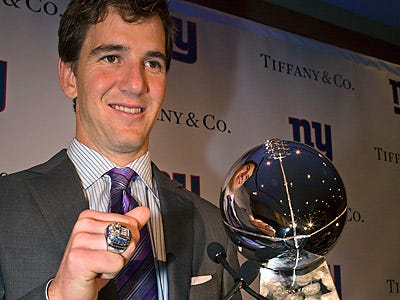 Eli Manning doesn’t care when he & the Giants get a new deal done. Whenever that time comes, he just wants it to make him the NFL’s highest-paid QB according to Ian Rapoport. And why shouldn’t he be? Being the highest-paid player at a position doesn’t always mean you’re the best – it’s all about the market. Don’t compare him to Aaron Rodgers, who inked a $22 mil/year deal a couple years ago. If Rodgers were negotiating now, he’d clear $25 mil easy. It’s not his turn though. It’s the ’04 draft class getting paid, starting with Big Ben re-upping for $87 mil over 4 years in March followed by Philip Rivers’ 4-year/$83 mil extension (with $65 mil guaranteed) this past weekend.
You can debate all you want about which of the three is the better talent, but there’s no reason for Big Blue not to reward Eli with a couple million more than the peers he was drafted ahead of. Unlike Rivers, he’s won a Super Bowl (twice). Unlike Roethlisberger, he’s won a Super Bowl MVP (twice) & hasn’t sullied the reputation of his class organization with rape cases or any other controversy. Manning is 3rd all-time in consecutive starts coming off a stellar statistical season he should only improve upon with the return of Victor Cruz, the addition of Shane Vereen & a year of experience under Ben McAdoo. With all this artillery combined with question marks on the other side of the ball, it’d be in the Giants best interest to get a deal done ASAP (as they want to do) before the price goes up. Eli Manning’s playing career has been a roller coaster at times, but he’s unquestionably one of the greatest G-Men ever on & off the field. An extra few bucks as a symbolic gesture putting him atop the QB money list is the right thing to do.
Although Ryan Nassib is dropping 50-yard dimes like this, so maybe Eli just needs to get the fuck out of his way: