Last week we sat down at Barstool HQ with the one and only Nickelback. The 11th highest-grossing band of all time. Ever heard of 'em?

According to BMG stats, Nickelback is the eleventh best-selling musical act of all time.  They’re also the second best-selling ‘foreign’ group in the US, behind only the Beatles.

Since the group debuted in 1995, they’ve sold 50 million albums.  For those wondering, they’re not even close to beating the Beatles record.  The RIAA has certified 178 million album sales by the group, which also makes them the best-selling group in the US, period.

Thanks to the powers of White Sox Dave, and our co-host Colin, we somehow landed an interview with the band. Heading into it, I had no idea what to expect. I knew they were huge rockstars, and I knew they were Canadian. So I didn't know whether to expect them to be smug assholes, or the nicest guys ever.

Luckily for us, it ended up being the latter.

They couldn't have been nicer guys, or more self-deprecating. (As you'll see from the interview)

Chad Kroeger is, no joke, one of the funniest guys we've ever interviewed. He was cracking jokes the entire time, and even slipped in a few renditions of some of the monster songs he wrote and recorded.

He gave some awesome songwriting advice (must watch), and he was so easy-going that I almost worked up the courage to ask him about the Avril Levigne and the conspiracy theory, but the interview was going so well I didn't want to send it off the rails.

He's a big fan of Dave (Portnoy, not WSD), and has been since watching his pizza reviews blow up, and his unwrapping's during Covid.

We found out what the fuck is on Joey's head in the famous "photograph". 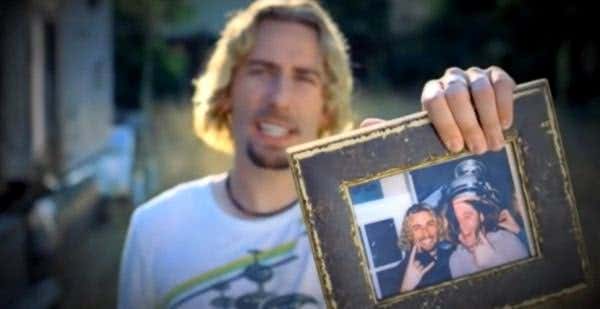 We talked hockey, we talked haters, and we even talked about whores.

Speaking of whores, Glenny Balls heard Vibbs mention during the rundown I filmed with Large and him earlier in the day that I was interviewing Nickelback later that afternoon and let out a big "whoop", and knowing what a huge fan he was I told him to slide through during the interview.

He made the perfect entrance by telling the band what a huge fan he was, and how he has his Instagram thots twerk to Nickelback songs on his Only Stans show.

The exchange between him and Kroeger about "exchanging content" was hilarious and must watch.

That interaction eventually led to this -

And oh yah, they also dropped a brand new album on Friday called Get Rollin'.

Check out the new single from it, "High Time"

and check out the new album -