I was sitting on the couch down in Fort Lauderdale with my buddy who was unemployed (at the time, but just last night signed a two year deal. Nbd), watching MLB Network and switching back and forth to America's Got Talent. (Awful show. I didn't have the remote).

During the episode, which was the season finalé apparently, the back-from-the-dead Avril Lavigne performed her new song.

And Travis Barker obviously because any song with actual and not electronic drums has to feature him now by law.

So we're sitting there watching and my friend's wife casually says, "too bad that's not the real Avril Lavigne."

I started laughing because I got the joke and knew about the whole conspiracy theory (more on this in a minute).

My friend, the unemployed one, looked at us both curiously and asked us what the hell we were talking about?

I thought everybody our age that grew up knowing the words to "Sk8er Boi" knew the whole story but apparently, I was wrong.

The Avril Lavigne replacement conspiracy theory is a conspiracy theory and urban legend stating that Canadian singer Avril Lavigne died in 2003, shortly after the release of her successful debut studio album, Let Go, and was replaced by a body double named Melissa Vandella. Evidence used to support the theory include changes in Lavigne's appearance between 2003 and the present, supposed subliminal messaging in her follow-up effort, Under My Skin, and a photoshoot in which Lavigne has the name "Melissa" written on her hand.

The origins of the theory can be traced back to the 2011 Brazilian blog "Avril Está Morta" ("Avril is Dead"), which led to conversations on internet forums sharing supposed evidence of Lavigne's replacement. The theory gained more traction in May 2017, when a Twitter user posted a thread recounting the theory. Lavigne herself has denied the theory on multiple occasions.

Ria and Fran actually broke this thing down on their show

My friend was blown away and ended up down a rabbit hole that now has him convinced this story is true.

But the whole situation got me to thinking about what other kinds of stories we used to spread around back in the day before Snopes ruined all the fun.

Drop your favorites and the ones I miss in the comments but here are some of my favorites in no particular order.

This one was so fucking awesome because of how believable it was.

Look at Paul Saviano (Paul) and tell me he doesn't look like a young, normal Marilyn Manson? 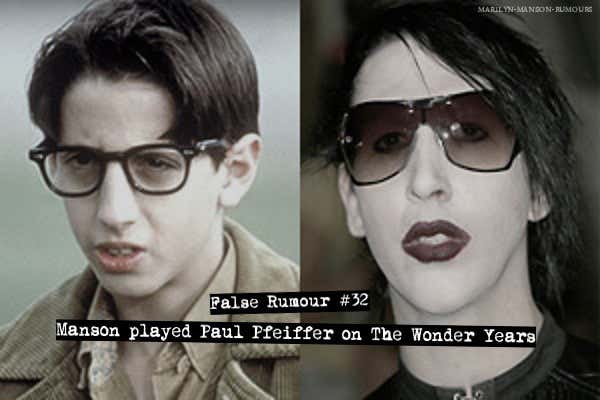 Honorable mention - there was also that rumor about him surgically having a rib removed so he could s his own d.

Everybody heard a version of this one. A night in a foreign country spent with a hooker or a girl too good to be true ends with a guy passed out. He wakes up the next morning in a bathtub full of ice with a note in front of him telling him not to move because his kidney(s) been removed (to be sold on the black market).

(Turns out this shit's not that far fetched)

The one about "Mr. Rogers Being A Former Navy Seal" earlier in his life

This one was wild but I knew kids who swore by it. The story goes that he always wore a sweater to hide a “Born to Kill” tattoo.

The "Girl Who Pleasured Herself With A Lobster Tail One"

I'm going out on a limb here with this one and assuming that this one didn't solely exist within the halls and fucked up minds St. John's High School students, but the story went that a friend of a friend of a friend knew a girl who was into some super freaky shit. Sparing everybody the gory details, (and ensuring this part of the blog gets published), she bought a live lobster and decided to have a little fun in the bedroom with it.

A few days later she was bent over in pain screaming. She was rushed to the emergency room for excruciating stomach pains before doctors examined her and discovered baby lobsters living inside of her.

Idiots. You ever wanted to guarantee you'd have a neighborhood of boys pissing in your pool, then tell your kid to spread this bunch of bullshit around. Might as well dared us to pound as many All-Sports as we could fill up on to then release in your shallow end.

The one about "Coca-Cola Dissolves Your Teeth"

We never really had soda in my house growing up and for a good portion of my life I thought it was because my mom didn't want my teeth rotting out of my skull.

Honest question, how do parents today convince their kids not to do stupid shit? Every kid has the internet at their fingertips and can google any fact in the world.

We always used to do this at sleepovers and nothing ever happened except for this one time we were at my friend Drew's house.

Drew was this kid that moved to town and was immediately the man. This is around 3rd or 4th grade I think back before we turned into total assholes. His dad was cool as fuck and used to let us have sleepovers at his place and rent like 3-4 different Nintendo games from Blockbuster and stay up all night. One night we dared each other to do "Bloody Mary" and he heard us talking about it.

While we were in the basement bathroom in front of the mirror repeating bloody mary he cut circuit breaker for the basement and tied a rope around the door handle from the outside. We saw the light disappear from under the bathroom door, tried to pull the door open and couldn't because he was pulling from the other side, and immediately started losing our shit. Four pre-pubescent kids screaming bloody murder in somebody's basement would probably get you locked up 100% nowadays. At the minimum, you'd get canceled by the rest of the neighborhood and have to put your house up for sale. But not Drew's dad. All mental traumatization aside, the guy was the man.

Drop whatever I missed below.