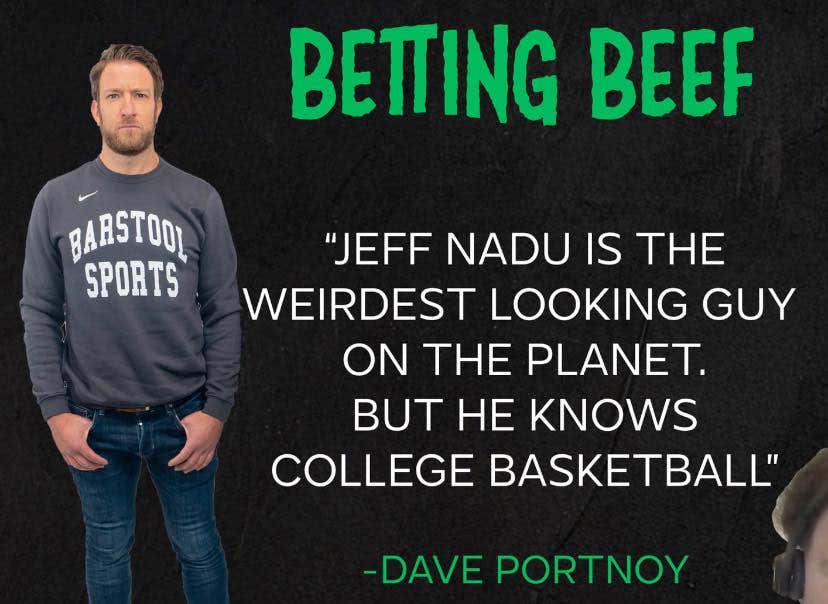 It seems like just yesterday, Kansas beat Carolina in the national title game in April. Well, we're just under a week away from the start of another hoops season. While yes, I have been killing it in football, college hoops is my bread and butter. I felt it important as the season approaches to discuss some of the teams you need to have on your radar as the we get started. Here's a few teams you need to wager on to win the whole thing.

All odds are from the Barstool Sportsbook.

I usually don't play anyone below 10/1 but to me as we come into the season, this is the best team in the country. They are the best starting five in America with a top five player in big man Armando Bacot. Bacot is a preseason All American and alongside one of the best guards in the country should thrive. They return four starters from a team that went all the way to the final and we get an encore from Caleb Love. Love at points in the tournament last year was unguardable.

What I love about this offense is not only Love, but backcourt mate RJ Davis can both run the 1 and 2 and are extremely durable. They sat top 20 in offensive efficiency last year and I think were really just scratching the surface of how good they can be on offense. They make free throws, don't turn it over, defend at a high level and nationally every year kill it on the glass.

One of the key cogs defensively is Leaky Black, one of the best individual defenders in America. Several people will point to the loss of Brady Manek, who transferred in last year from Oklahoma. While it's a loss, I highlight transfer Pete Nance coming in this year from Northwestern. I personally think Nance is a better all around player and the chemistry I think he can build with Bacot is going to be fun, as they are a different types of big. Nance is a dead eye shooter from the outside sitting 21st in America last season in 3 point percentage. He made 42 of his 92 three point attempts. He also gives you a very strong rebounding presence.

The bench has 3-4 kids that can give you something including top 50 freshman, guard Seth Trimble and big Jalen Washington. This team is too good, and should more like 6-7/1. 9/1 is a bargain.

I'll admit the last couple years I have been stubborn with the Longhorns. I love Chris Beard. I think he's among the greatest coaches the sport has to offer and I think finally this year everything comes together. There's no more transition year and the bad eggs in the locker room are gone.

The first thing I know is this team is right up there as one of the best defensive teams in the country. This group will be a throwback to the team that was runners up to Virginia that Beard had in 2019 at Texas Tech. They are extremely long, all defend individually very well and can switch and play at different spots.

One key strength is Dylan Disu is finally healthy, he just couldn't stay on the court last year. Texas was still top 15 nationally in defensive efficiency and I have no doubt in my mind that a healthy Disu means a top five defense. On offense they welcome in transfer Tyrese Hunter from Iowa St who stabilizes the PG position and can defense his ass off plus it allows scorer Marcus Carr to play more off the ball at the two.

The key for me with Texas is big Timmy Allen. They need him healthy and his ability to score alongside Carr will make big waves for this offense. If he doesn't and freshman Dillion Mitchell is more pogo stick and doesn't develop his game Texas could struggle to score. To me though, there is just too much upside with this starting five and the bench. They are talented as hell on defense and won't need to score 80 points a game. Like I said, this is contender and a sleeper Final Four team in Austin.

I love nice deep odds on teams that I have towards the top of a POWER 5 conference. No one this year is going to see Florida coming and I'm here for it. Do I have Kentucky or Tennessee or Arkansas above Florida, yes, however Florida this season to me is a top 15 program coming into the season and right behind those groups. These odds are way too high.

The big issue I had with Florida the last couple seasons wasn't the roster, which has been fine including a stacked team this year. It was the coaching, Mike White wasn't good and this team constantly played inconsistent basketball and it was clear they had a lacking identity or really just no identity at all. Their strengths as a team were not being utilized.

Lucky for them, White is gone and enter in wonder kid Todd Golden. The 37 year old coach is a huge edge to a great team on paper. I look forward to seeing this roster thrive under him and his staff. In looking at them big Colin Castelton returns, he has improved every year he's been in Gainesville and is set for his final swan song as a senior. On both ends, he's extremely efficient and with the addition of PG Kyle Lofton, I am giddy. Lofton was terrific at St Bonnies over the years and is a quintessential point guard who has high basketball IQ, isn't selfish and just plain gets it done. He is huge get for Golden alongside stretch 4, Alex Fudge who comes in from LSU. Fudge is a great defender and should be the guy that does all the dirty work for the Gators.

One issue this team had last year was shooting. Lofton should help that as well as more playing time for Kowacie Reeves who in limited time last year was actually one of their better shooters. Keep an eye on the bench, VMI transfer Trey Bonham is terrific and really stabilizes you at the end of games with an 83 percent FT percentage. One thing I think we will see with Florida is high marks at the line, this is something that is huge in game and with Bonham, Lofton and Belmont transfer Will Richard, they all shoot over 80 percent. Florida is going to cover spreads as I've detailed over the years very much comes down to FT's and with this roster there is team oozing with potential. Golden is the real deal and takes this team from making the NCAA tourney to a team that can go on a run and win SEVERAL games.

As you can see, I am pumped and can't wait to not only talk about the big boys, but mid majors, low majors and everything in between. For more college basketball, I will be LIVE every day at 4pm EST starting Monday Nov 7th on the Barstool Sportsbook Youtube channel talking about the betting cards.

You can also find me weekly on Barstool's newest college basketball podcast "Roundall" featuring me, Marty Mush, Jordan Bohannon and Michigan big man Hunter Dickinson. To get ready for the season we have talked to Jay Bilas and this week have Jeff Goodman joining. Subscribe here: