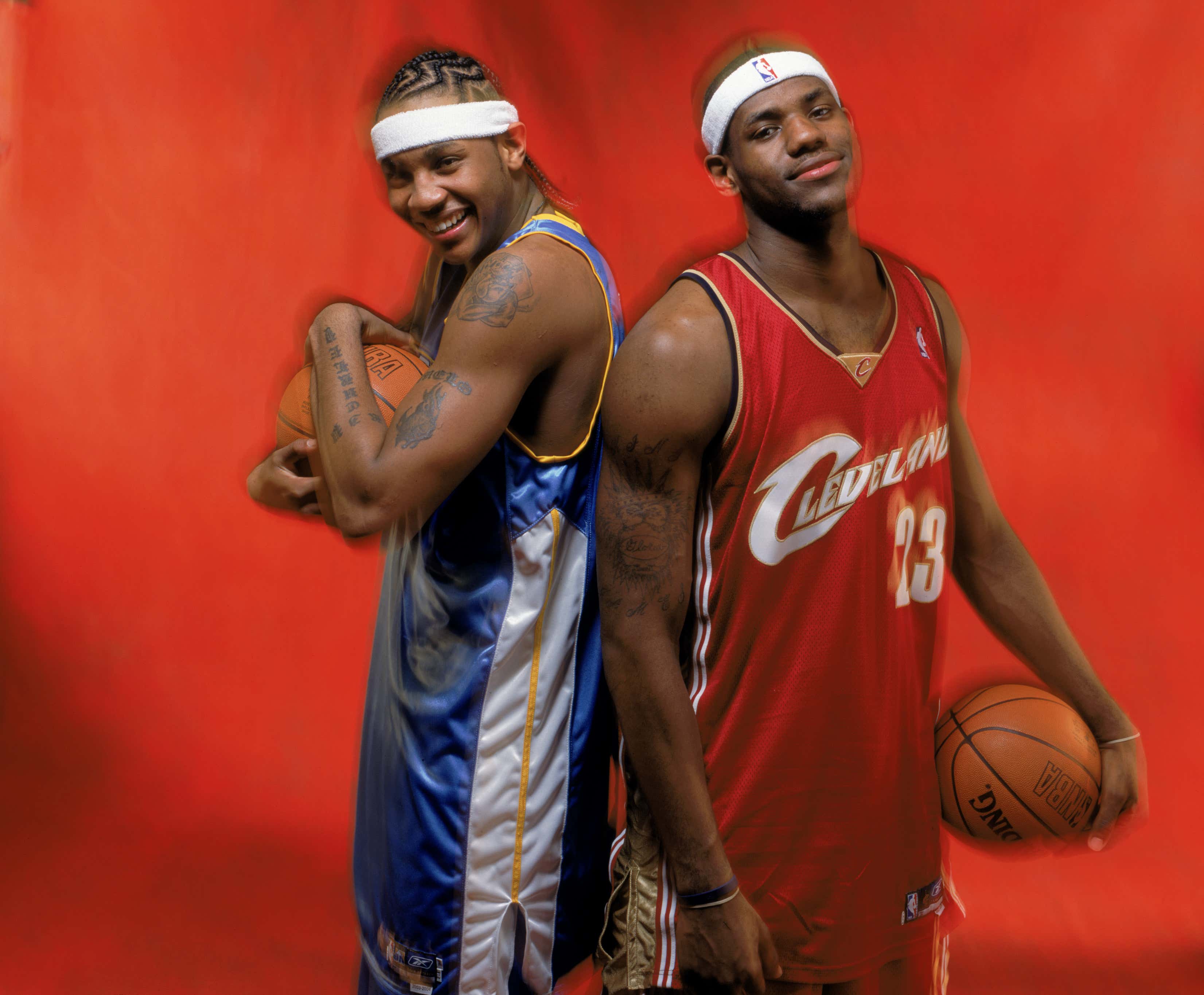 So far, I have the NFL winning twice and the NBA once. Shows what I know, I thought the NBA would dominate this exercise. Considering this is one of the great NBA drafts of all-time, I am guessing they do pretty well here. As always, I don't include the NHL because I don't know enough about hockey to fairly compare the players but here is the NHL Top 5 from 2003 if you'd like to play along:

This might be as recent as I can go doing these because we are running into players that are still active. Both Fleury and Staal are still playing and Fluery is still very effective. One has to think Fleury is a lock for the HOF since he won three Stanley Cups and brought an expansion team to the Finals. Staal is a 6-time All-Star who has won a Stanley Cup and I'll ask NHL fans…do you think he will get in?

The rules for the other three leagues haven't changed. The top player from each pick will get three points, second place will get one point and third place won't get any. The sport with the most points after five rounds wins.

Even though his team is currently 1-5, Lebron is the choice here. He probably is the best #1 pick in any sport. Who else in the argument? Kareem Abdul-Jabbar? Peyton Manning? Ken Griffey, Jr? Lebron is the best of that group. How much differently would Lebron be perceived if he never left the Cavs? I think he'd be held in much higher regard. He even got a chance for a redo and still left again. Going to the Heat, you can justify. He hadn't won a title yet. But the Lakers move just felt greedy.

If you had to pick an active comparison for Carson Palmer, I'd go with either Derek Carr or Kirk Cousins? All guys that are better than average but not good enough to compete for a Super Bowl every year. Palmer might be the worst of that group but there is no question he had the best season of anyone in that group. Like Jacoby Ellsbury in 2011, Palmer's 2015 is the one year everything clicked into place. He was 2nd in the MVP voting (lost to Cam Newton). Is it better to have that one great year and wonder if your whole career could have been like that or never experience that at all?

Delmon Young was a good contact hitter when he came to the major leagues with Tampa. I thought he'd develop power and keep getting better. Instead, he just got worse. He was runner-up for Rookie of the Year in 2007 (lost to Dustin Pedroia) and then Tampa wisely traded him for Matt Garza and Jason Bartlett. He did win the ALCS MVP with the Tigers in 2012 but would be out of MLB before he was 30. He also said some anti-Semetic and anti-Hispanic things on separate occasions and once choked a valet. I'm not sure what I expected Delmon Young to be. Maybe a guy who could win a batting title or two? Similar to Bill Madlock or Al Oliver's career? I certainly didn't expect him to be a violent racist. 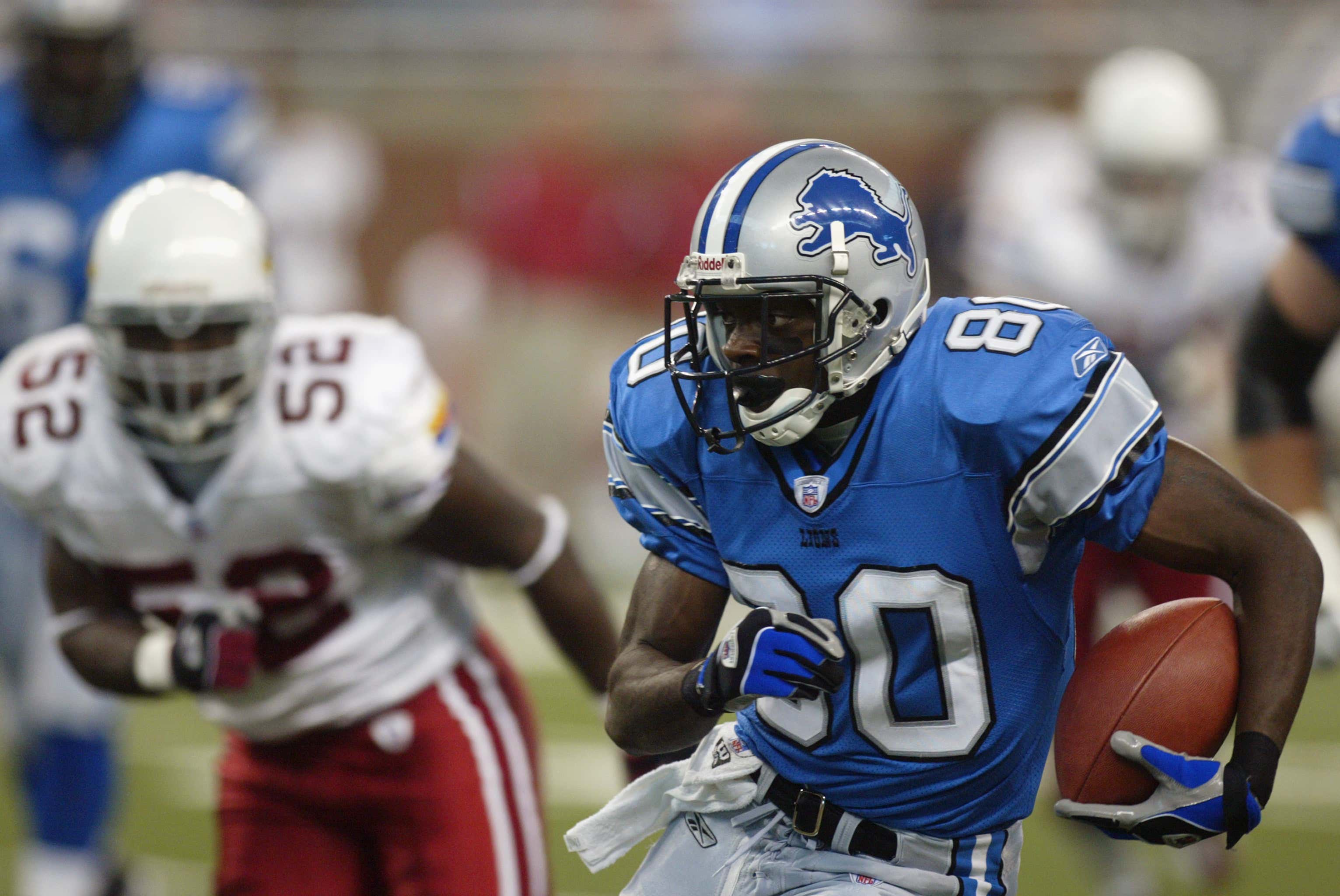 This is a tough pick for the Motor City. We'll start with Milwaukee though. Despite his one All-Star appearance, I don't think you could ever call Rickie Weeks a star. But he was a very decent player for a decade for the Brewers. His defense at second was always shaky but he had an above average bat for his position. Getting a competent player at the #2 pick might be a miss for the NFL or NBA, but for the MLB, Weeks was a solid pick.

They won the 2004 NBA Finals anyway, but imagine how good the Pistons would have been if they had drafted Carmelo, Bosh or Dwyane Wade? In hindsight, it's pretty wild that Pistons team won a title. They didn't have a true massive superstar but it's not like they were a fluke. They even made it back to the NBA Finals the next season. Meanwhile over those two seasons, Darko played a total of 448 minutes and that's counting the playoffs. To his credit, he did stick around in the NBA for ten seasons and was a decent backup center option for a few years. He was obviously a giant bust but at least he brought back a first round pick from the Magic when he was traded.

The Charles Rogers saga is just sad. He broke his clavicle twice, was suspended a number of times for marijuana use, was pumped full of Vicodin by the Lions trainers to the point where he wound up with liver cancer and was dead before he was 40. He played a total of 15 NFL games. This is more of a tragedy than a bust. 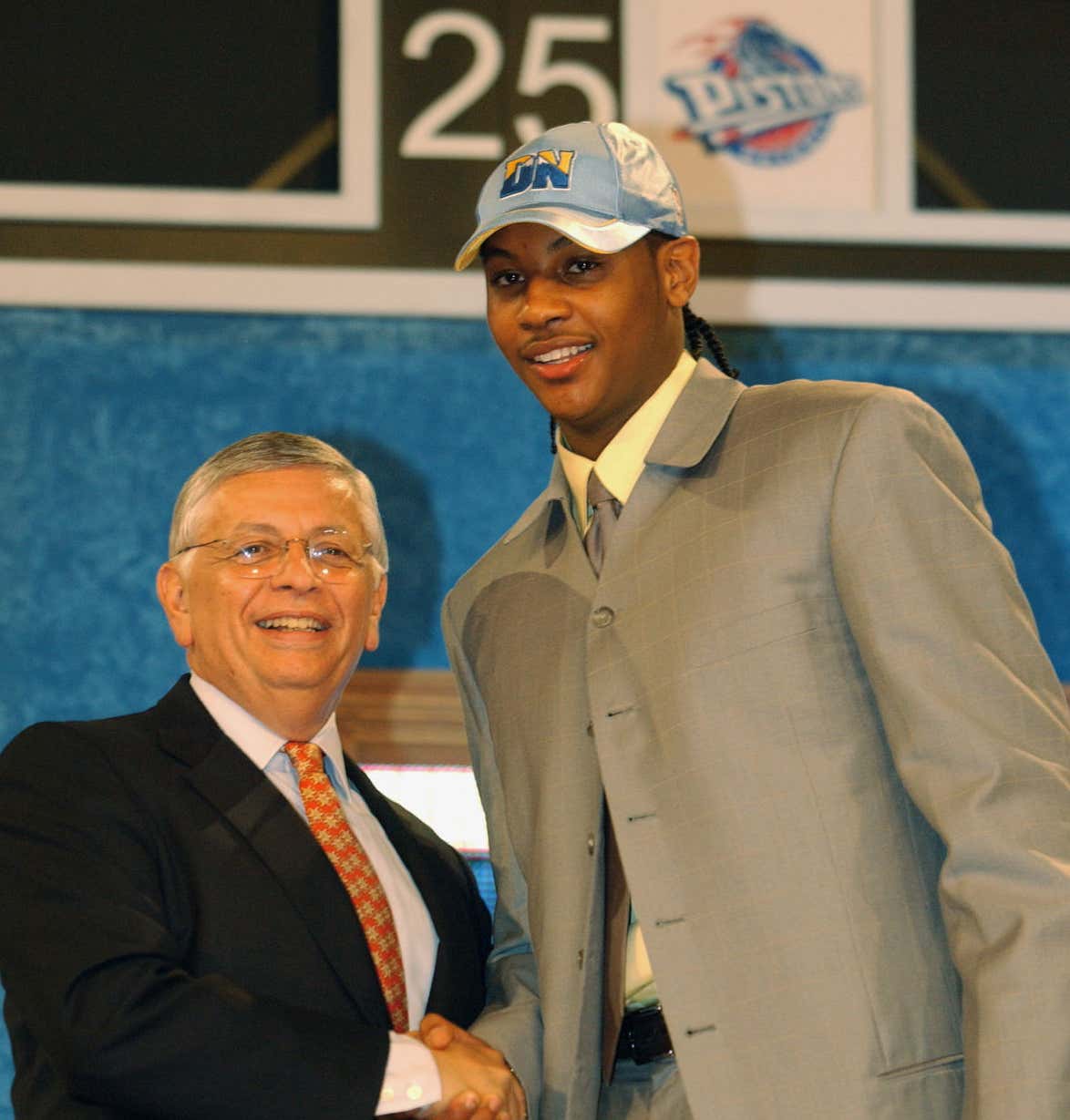 You have to be some kind of talent to be a 10-time All-Star and certain future Hall of Famer but still leave people wondering if you slightly underachieved. He remains unsigned so this may be the end of the road for him but we've also said that before and he's been impressively resilient. The issue with him is he never got to an NBA Finals. He's only been to one Conference Finals. Hell, he's only gotten out of the first round twice. That's 11 (!!!) 1st round exits for him. Most of that is the fault of the teams that surrounded him. He has averaged more points per game in the playoffs than the regular season. But when you are the superstar and the same disappointing result keeps happening, that's going to fall on your shoulders.

To think, the Lions could have had Andre Johnson instead of Charles Rogers. The Matt Millen Years were truly wild. Johnson is 11th all-time in both receptions and receiving yards. As great as he was, he had even worse playoff luck than Carmelo and his talent was obviously wasted in Houston. He only played in four total playoff games in his entire career and never advanced past the second round. Johnson is on the list of nominees and could get into the HOF as early as the Saturday before the Super Bowl.

Sleeth is a great example of the old draft practices in baseball not working. He wound up holding out and signing very late and missed the entire 2003 season. The MLB and the players union finally agreed years later that the amount of time players and teams had to negotiate was far too long and shortened it. That didn't help Sleeth though and he wound up making his debut in 2004 and was rushed into AA. He struggled there and eventually needed two Tommy John surgeries. He never made it out of AA. 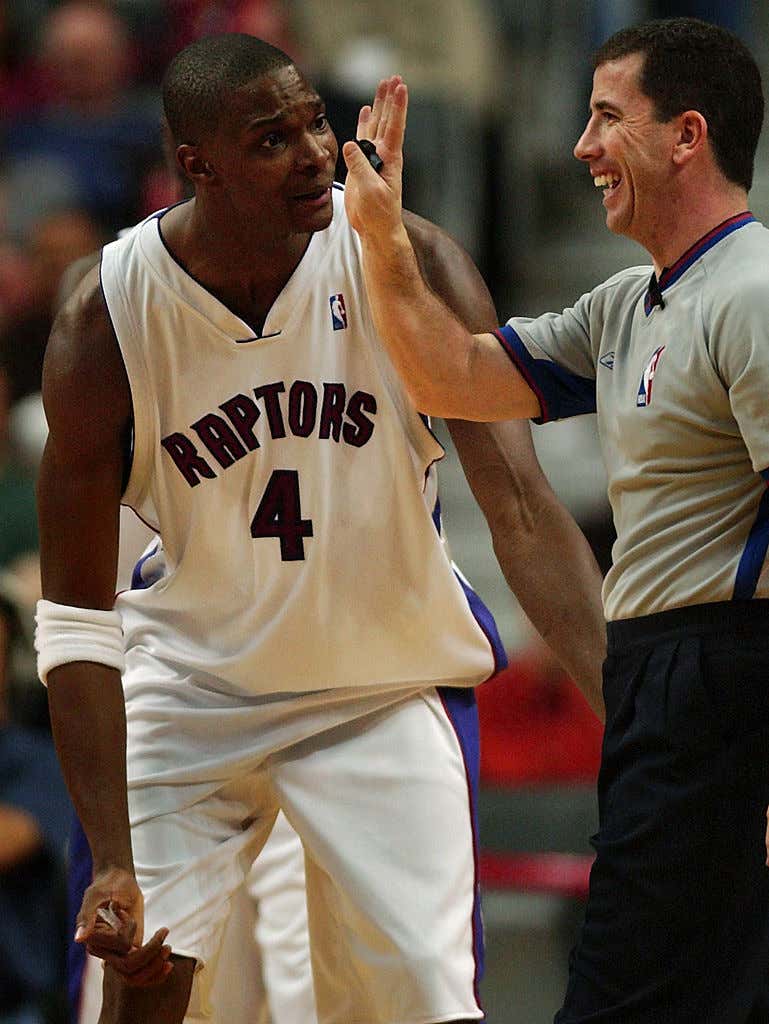 I have Chris Bosh so associated with the Heat that I didn't know he played over a 100 more games with the Raptors than with Miami. He was probably the worst player of the Miami Big Three but he was the most likable. The blood clotting that led to his career ending is very sad but he still had a great career: Two titles, a gold medal and a 11 time All-Star. He may not have been as great as Carmelo but I bet he's like to trade careers with Bosh even with Bosh's forced early retirement.

I'm going to call this a tie between Stauffer and Robertson. Stauffer was a decent long reliever/starter for about five seasons for the Padres. During negotiations with the Padres after he was drafted, Stauffer and his agent told the Padres that he had an MRI that did show weakness in the shoulder. The Padres still signed Stauffer but at a lower rate than he would have gotten. The Padres were struck by Stauffer's honesty and that may have played a role in him pitching in the organization for over a decade.

Robertson's biggest crime was getting drafted so early. If he was a 5th round pick with the same career, he would have been much more beloved by Jets fans. Instead, the Jets traded two 1st round picks to move up to get Robertson. He has some highlights, made the All-Rookie Team and was Defensive Player of the Week twice but after a disappointing year in Denver, he retired playing six years in the league. 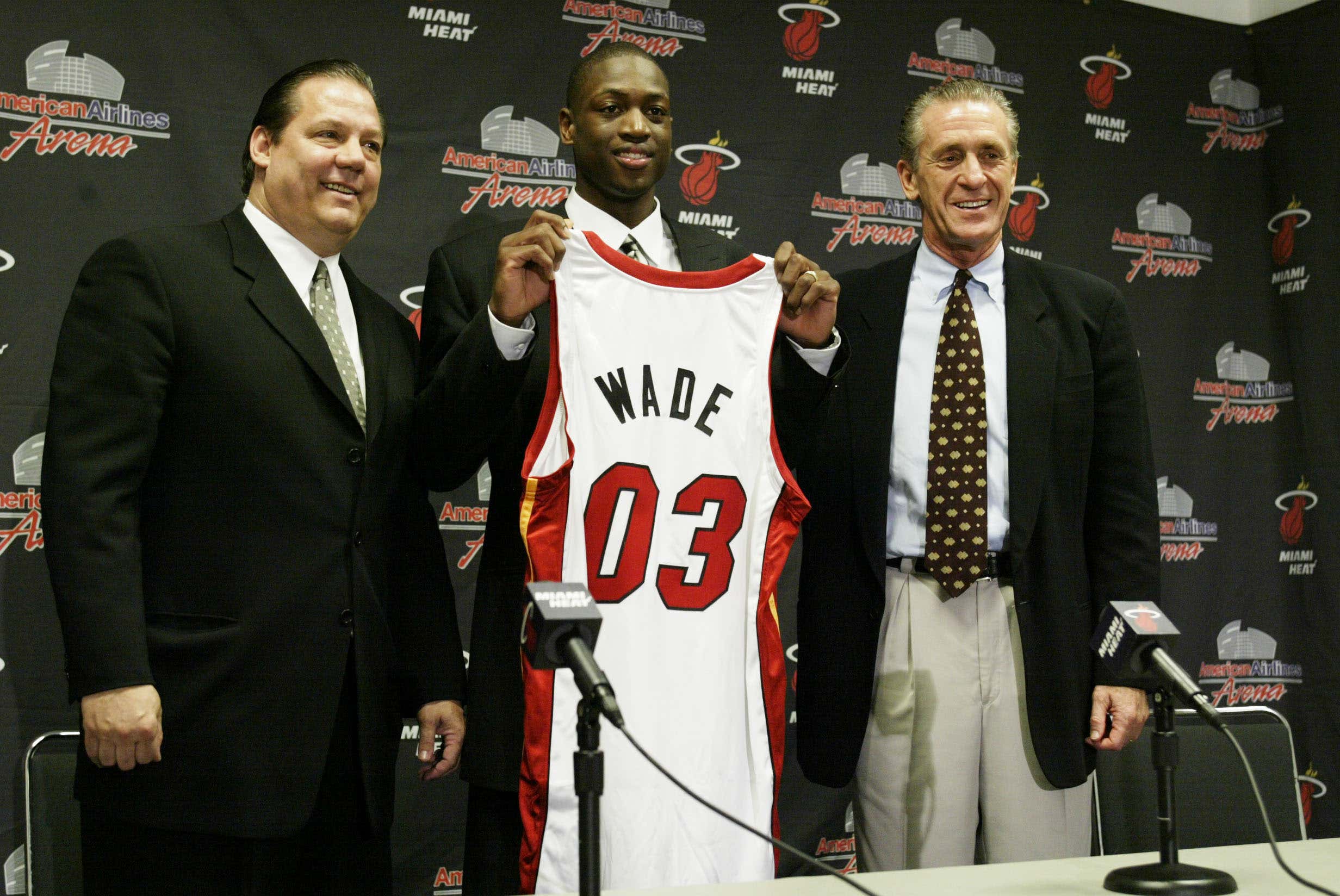 What an absolutely amazing amount of talent in this draft for the NBA. Everyone (rightfully) shits on the Pistons for the Darko pick but you have to feel for the Clippers and Bulls here. They had the 6th and 7th pick and just missed out on FOUR Hall of Famers. The Big 4 weren't the only All-Stars in this draft. David West and Kyle Korea were also in this class. As far as Wade, I am glad he finished his career with the Heat. I like when guys spend their whole career with one team and leaving to go the Bulls (and eventually the Cavs) seemed cheap to me. For a city that had the Marlins win two titles and got broken apart pretty quick each time and to have the Heat win three, it's good to see Wade and Udonis Haslem stick around.

Terence Newman was a good cornerback for a very long time. Because he redshirted his first year at Kansas State, he came into the NFL as a 25 year old rookie for the Cowboys. He wound up playing 15 seasons, getting at least one interception in each year and making two Pro Bowls. However, despite making the playoffs eight times, he never got to a Conference Championship much less a Super Bowl. Had he played on great teams, could he have been a Hall of Famer?

Where you have been and where you are will unfortunately often dictate where you will go. Chris Lubanski never made it to the big leagues and he probably should have. An outfielder with some power and a little speed,  he seemed to be on his way. He had a good season in AA in 2006. He went to AAA the next year and struggled and that set his fate. He wound up playing in AAA two separate times beyond that and kept improving but it seems that people saw him a minor league lifer at that point and once you get that tag, it's tough to move beyond that.

13 points is obviously a record and one I am guessing will never be broken. The NBA has obviously had some great drafts over the years including the Carter/Pierce/Nowitzki draft but Pierce and Nowitzki weren't in the Top 5. It's rare that you get the talent in this draft and even more rare to have the teams get it (mostly) right.