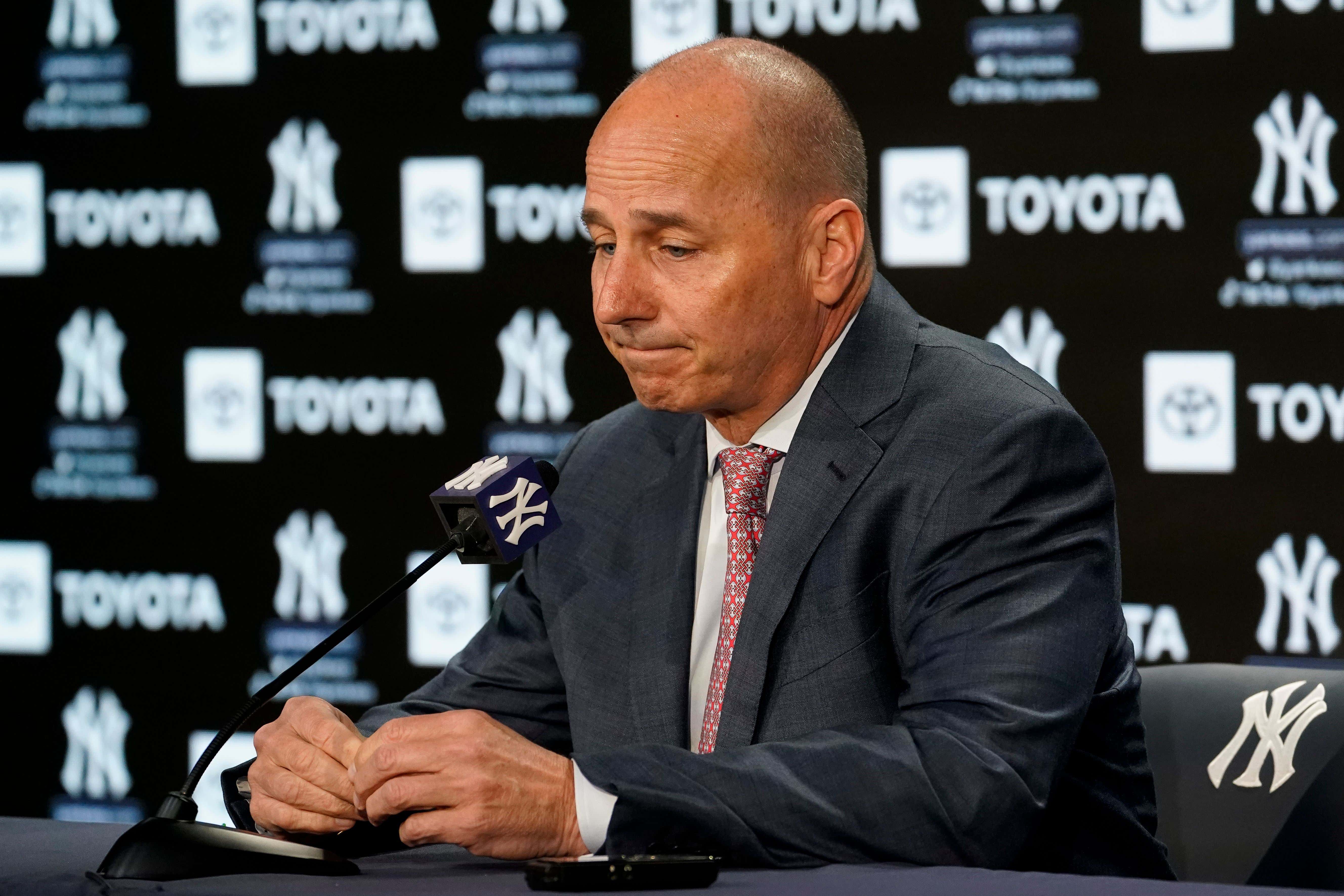 This is becoming my least favorite yearly tradition. Every season the Yankees lose in the playoffs. Every offseason I write a blog about how the Yankees need to clean house, fire a bunch of people, and overhaul their entire organization. And every year they do absolutely nothing, bring back the same people responsible for this mess, and the cycle repeats.

By definition, the Yankees are insane and thus driving me insane.

For an eleventh twelfth thirteenth consecutive season, the New York Yankees will not be World Series champions. For an eleventh twelfth thirteenth consecutive season, the Yankees won't even be AL Champions. For an organization that prides itself on championships, they have now fallen short of that goal for 11 12 13 straight years. The Steinbrenner mantra has always been that anything short of winning the World Series is a failure. So despite all their wins and playoff appearances, there's only one way to describe the past eleven twelve thirteen seasons: a failure.

I barely have the energy or passion to write this blog this year. The Yankees have defeated me, and this all feels like a pointless exercise. I know nothing is going to change, and I don't want to get my hopes up. The Yankees have had the same failures for over a decade now and they've done essentially nothing to address those issues. The offense shuts down in the postseason time and time again. They are home run dependent. They strike out too much. They don't have enough pure hitters who can consistently make hard contact. The Astros are light years ahead of the Yankees. Since 2017, Houston's offense has the highest average, fourth most home runs, and lowest K% in all of baseball. Proof it's possible to hit home runs while not striking out. And proof average does still matter.

This chart sums it up well.

Now granted, the Astros did have a massive cheating scandal which required them to fire some people, but that almost makes the point stronger. They had to clean house and still found a way to stay on top by hiring a bunch of young executives with fresh ideas who came from really smart organizations. The Astros aren't just ahead of the curve, they have basically invented the curve. And the Yankees have the same old ass, broken brain, only have jobs because of Hal Steinbrenner's loyalty, fools running the organization.

It starts with Brian Cashman. Look, I don't want to hear about how the Yankees have been to the playoffs a bunch and won 99 games and go to the ALCS a lot and blah blah blah blah. That's loser talk. If the Yankees don't win the World Series, the season is a failure. Point blank. And the Yankees have now been failing for 13 straight seasons. They clearly aren't built to get over the hump and that falls squarely on the shoulders of Brian Cashman. He needs to be fired along with the rest of the entire front office. He's done a fine job finding some fringe guys that have turned into valuable players through the years, but most of them have faded into oblivion and the few that have actually panned out aren't enough to save his job.

This postseason has showcased some of Cashman's greatest failures. Bryce Harper was the NLCS MVP and is having a historically great postseason. The Yankees declined to even meet with him despite everyone and their mother knowing Harper grew up a Yankee fan and dreamed of dawning pinstripes. But nope. Cashman arrogantly refused to even meet with him because the Yankees had plenty of outfielders, including one of Cashman's favorites in Aaron Hicks. They signed him to a 7 year/$70 million extension that looks worse and worse by the day. But Cashman is too much of an arrogant prick to ever admit a mistake so he was still getting starts in the 2022 postseason. (Some other outfielders that prevented the Yankees from signing the generational superstar were Clint Frazier and Brett Gardner).

Then there was Manny Machado who was also a free agent that offseason. He may have just put up an MVP season. But the Yankees didn't need him. We had Miguel Andujar, another prospect who fizzled out under Cashman and Boone's watch. And we certainly didn't need him this year. Our left side of the infield came from Cashman's big offseason trade where he acquired IKF to sure up defense at shortstop and Josh Donaldson for his bat. IKF's defense ended up being so bad that he couldn't even start in the playoffs. And Josh Donaldson became an automatic out who went 5-29 with 16 strikeouts. Yet another stroke of genius by Cashman and his cronies.

But don't worry. At least the Yankees are saving money and didn't take on a big contract with Harper or Machado. You couldn't sign Harper because he'd get old eventually and you'd never want to pay a 36 year old $25 million per year right? Oh what's that? Josh Donaldson is a current washed up 36 year old who's costing the Yankees $25 million against the luxury tax this year? Yup that's right. A 37-year-old Josh Donaldson will cost the Yankees $25 million against the luxury tax next season. A 30-year-old Bryce Harper will cost the Phillies $25.3 million next season.

I know Hal Steinbrenner will never read this, but if he ever saw those above three paragraphs, I don't know how he could ever justify bringing Brian Cashman back for another season. I actually think the "Hal is cheap" narrative is unfair at times. The Yankees had a payroll of $251 million this season. The highest in franchise history. You should be able to build a winning team with that amount of money. But Brian Cashman can't. He has allocated those resources incredibly inefficiently. If Hal does care about making money, which we know he does, then perhaps he should start by firing the guy who just built the worst team that $251 million could buy. But I doubt it happens. Cashman seemingly has a lifetime contract for some reason. Meanwhile, Dave Dombrowski is about to bring his third team to his fourth World Series in the last decade all while being fired twice. (Brian Cashman hasn't won a single pennant in that span).

Maybe the Yankees will fire Aaron Boone instead as a scapegoat. I guess that would at least be something. Although I don't think he's the biggest problem, he definitely isn't the solution. He often looks like he's in over his head when he has veer from the pre-game plan that the front office draws up for him. That was showcased in full force Saturday when with the bases loaded, nobody out, and the game on the line, Boone took out his best pitcher (Cole) and passed over his three best relievers (Holmes, Loaisaga, Peralta) to bring in Lou Trivino because his gameplan probably suggested that he was the best best for the bottom of the order. Guy has no instincts. But Cashman loves keeping him around as a puppet who can take the blame for his failures.

Whatever. It is what it is at this point. No changes will be made and we'll hear about how the Yankees had a historic first half, had a bunch of injuries, and still managed to win 99 games and reach the ALCS. That will be the narrative that Hal, Cashman, Boone push. But this is a critical offseason for the Yankees and I just don't trust the current front office to make the right moves. Re-signing Aaron Judge is the bare minimum. I know he struggled in the playoffs, but you just can't let a guy break the single season (AL/clean) home run record and let him walk. Not when he's the face of your whole franchise. Not when every guy in the locker room says he's the de facto captain. Not when you have a whole section in the outfield named after him. Not when he's the best homegrown star you've developed in 30 years. Not when you're the New York Yankees. You re-sign him at whatever it takes. And re-signing him doesn't make the team any better. It simply maintains you where you're at. They will still have plenty of other improvements to make and don't be fooled into thinking otherwise.

Someone wake up Hal and let him know that his once proud franchise has become a laughing stock.