Before it was revealed a Stoolie put these words in Ben Volin's mouth, they were no more true and no less preposterous than they are now that we know he was just another Boston newspaper journo running with a fake narrative just because he wanted to believe it. Which is a time-dishonored tradition around here.

And thanks to some actual quality journalism, we can now confirm that I was right on the nose with my reaction to Volin and Albert Breer questioning Mac Jones' attitude:

I'll say first that I have no problems - and I cannot stress this enough - with Mac Jones attitude, his mental approach, his work ethic, none of it. If you could measure immeasurables, his would be off the charts. I also don't think he needs to be "humbled." What Volin is saying here is right out of the pamphlet in the waiting room when you go to interview for a Boston media job, "So You Want to be a New England Sports Journo?" They love to see a new, fresh face come along, so they can blast pepper spray into it. They're doing it with Jaylen Brown and Jayson Tatum. Now it's Jones' turn. It's part of the gig.

And even sooner than that, when it was coming from Mike Florio:

[L]et's go right to the heart of this. The "quiet friction" that's about to "boil over." Which presumes, what? That Mac Jones can't handle Bill Belichick's style? That maybe his doesn't respond well to being coached hard? To have much demanded of him? To be given much responsibilty and a lot of information and held accountable for how well he performs? I mean, has he ever had to work for a coach who operates the way Belichick does? 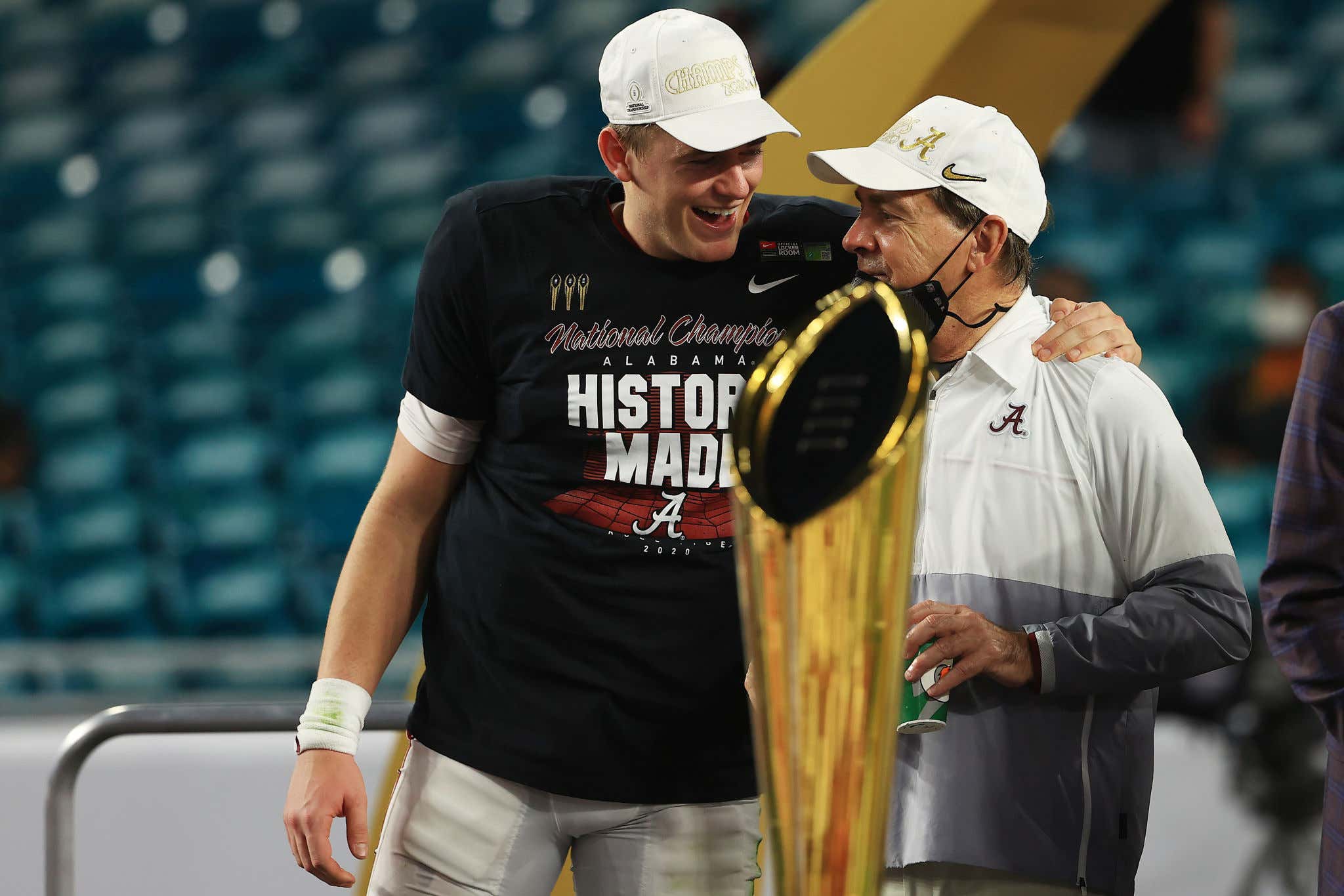 Oh right. The only other relationship he's had with a coach just happened to be from the one guy who operates exactly like the one he's got "friction" with now. Belichick and Nick Saban are football's Romulus and Remus. Twins fathered by the war god Mars and suckled by the same she-wolf to coach football (but without all the messy fratricide). But now we're being asked to believe that Jones can't hack it, now that he's a grizzled veteran of 24 years old and 20 career starts.

When the truth is, that one of the things that made Jones the perfect choice to replace Tom Brady was precisely because he played under Saban. That he not only survived the crucible of Saban's demanding style, but he thrived on it. We know he can take it because he has. Now we're supposed to think that what? He's a delicate, fragile, Hummel figurine who needs to be handled with care or else something is going to "boil over"? Not a chance.

And since you no doubt see where I'm going with all this, I'll take you straight to the part where I say, "Was Old Balls right again or was Old Balls right again?" Because here's some genuine football reporting from a football reporter, Jeff Howe of The Athletic, essentially confirming what I wrote then. Except adding that Jones has a longer history of working with demanding taskmaster coaches than I gave him credit for:

Source - Jones’s former high school coach, the late Corky Rogers, was notoriously demanding on his quarterbacks, once even threatening to bench Jones after a touchdown pass because Rogers wanted him to throw it elsewhere. They often clashed but in a familial way. The hard coaching wasn’t always welcomed, but it was respected.

Later, Jones passed up other scholarship opportunities to commit to Alabama even though some coaches and advisors couldn’t understand it. … Jones’ chances of ever playing were never guaranteed.

As he was biding his time in Alabama, Jones treated his responsibilities with the scout team like his own versions of games. During one particular run-heavy period against the starting defense that was stacking the line to prepare for an upcoming opponent, Jones kept changing the play at the line, throwing deep and celebrating with his receivers after each big strike.

The defense complained to head coach Nick Saban, who hollered at Jones to knock it off and stick to the script. Jones fired back something to the effect of, “If you don’t like it, tell your defense to stop it!” Saban was fuming on the field, but the Alabama coaches laughed about it after practice.

That story highlighted Jones’ competitive spirit that endeared him to both his Alabama coaches and, eventually, to those in New England, too. …

This past offseason, Jones dove headfirst into a conditioning program to gain a leaner build. He was routinely one of the first players to arrive at Gillette Stadium, often getting there before coaches. That doesn’t sound like someone who was getting fat and happy after a Pro Bowl appearance in his rookie season.

And as the Patriots worked on a new offensive system … Jones was lauded for his collaborative communication. He’d let them know — forcefully, at times — which plays or concepts he did and didn’t like based on their ability to execute them, but all parties involved had a voice in the process.

This was all reported during the offseason, and Jones was largely commended for it.

Then, with respect to Jones and the team allegedly beefing over how to treat his high ankle sprain:

According to league officials with knowledge of the situation, Patriots coach Bill Belichick was not pushing him toward a procedure, contrary to another narrative that indicated the sides clashed about his recovery.

So what have we learned about Jones here? He responds to demanding coaching styles. As the Country song goes, to being ridden hard and put away wet. He's hyper-competitive in practice. He believed in his ability, waited for his chance to come, and made the most of it once it did. He outworks everyone in the building. He communicates with his coaches about what works and what doesn't. And participated in the most conditioning sessions allowable under the CBA to transform his body from the doughy, ill-defined manbod that went 13-0 and won the National Title at Alabama into his current Mr. Olympia physique. Am I leaving anything out?

If that's a bad 'tude, then we need to redefine what a good one is. There's not a workplace in this once great nation of ours that couldn't benefit from all of us being like Jones. To adjust to something less like our own lousy morale and pisspoor work ethic, and something much more in keeping with the example of this hardworking, driven, intense, high-octane adrenaline junkie. If I had 10% of the energy he's put into his preparation since his time of working with Corky Rogers to the present day, I'd be Hemingway. Getting drunk on Absinthe in the tropics and writing glorious prose about fishermen and bullfighters, instead of sitting here in the cold wetness of a New England October, burping grammatically incorrect nonsense about my obsession with a 24-year-old quarterback into a laptop. But I don't have it in me to put as much into my work as Mac Jones does. Or to have a mental approach to the job as he has had, even before he was getting paid.

Presumably Jones is starting against the Bears on Monday Night Football. Obviously, I can't wait to get him back in the lineup. While at the same time dreading what life will be like if a few drives stall or he turns the ball over. But if the Boston media keeps trying to smear him over his attitude like they've done to practically every emerging superstar in this town since the time of Ted Williams, it'll be war. That is my vow to you. I'll defend Mac-10 with my life. How's that for an attitude?