Before we get started here, I need to make a few things abundantly clear. 1) I will never shit on anyone's attempt to actually smoke a brisket. It's a brutal cut of meat to master and it takes screwing up at least like 50 briskets before you finally start to hit a groove and smoke a bunch of great ones. So as long as folks are trying out there, I'll never rip on your actual brisket cook. As evidenced by the fact that I might have been the only person on the internet to try to defend Lincoln Riley's brisket, and also offered to help Glenny.

With all that being said... 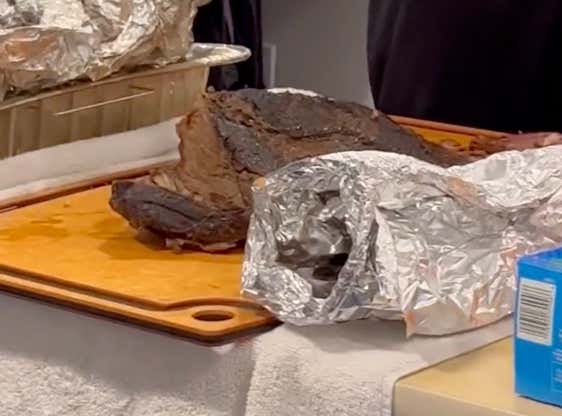 We just need to teach Justin how to properly slice the brisket. Right here it looks like the Herb Man was slicing the point with the grain instead of against. A brisket has 2 different muscles--you have the flat, and then you have the point. You have to slice them two different ways since the muscle grains are going in separate directions. So you slice in one direction through the flat, and then turn the brisket 90° to slice the point the opposite direction.

That way you end up with slices from the point that are so insanely tender that they just melt in your mouth.

But if you slice the same direction all way down the whole brisket, those slices from the point are going to come out a little tough. So all we need to do is work on Justin Herbert's slicing technique. That's all. Because in all actuality, the brisket itself looks perfectly fine. Actually looks like a really solid cook.

Pretty juicy, good color on the bark. Smoke ring doesn't mean nearly as much as people think it does, but it still has a good looking smoke ring that makes each bite more visually appealing.

He did pretty much everything right until he finally cut into the thing. That would be like having a drive that starts on your own 3 yard line, marching all the way down the field, deciding to go for it on 4th & goal from the 1-yard line, and then throwing a pick. It just breaks my heart to see. Which is why I'm offering Justin Herbert a lifetime subscription of brisket lessons, free of charge. Any time he wants to come to Philly and get a few lessons in, my door is open. So if you're reading this right now, Justin, and I know you are, let's set it up for the next episode of Meat Sweats. Bolt up.