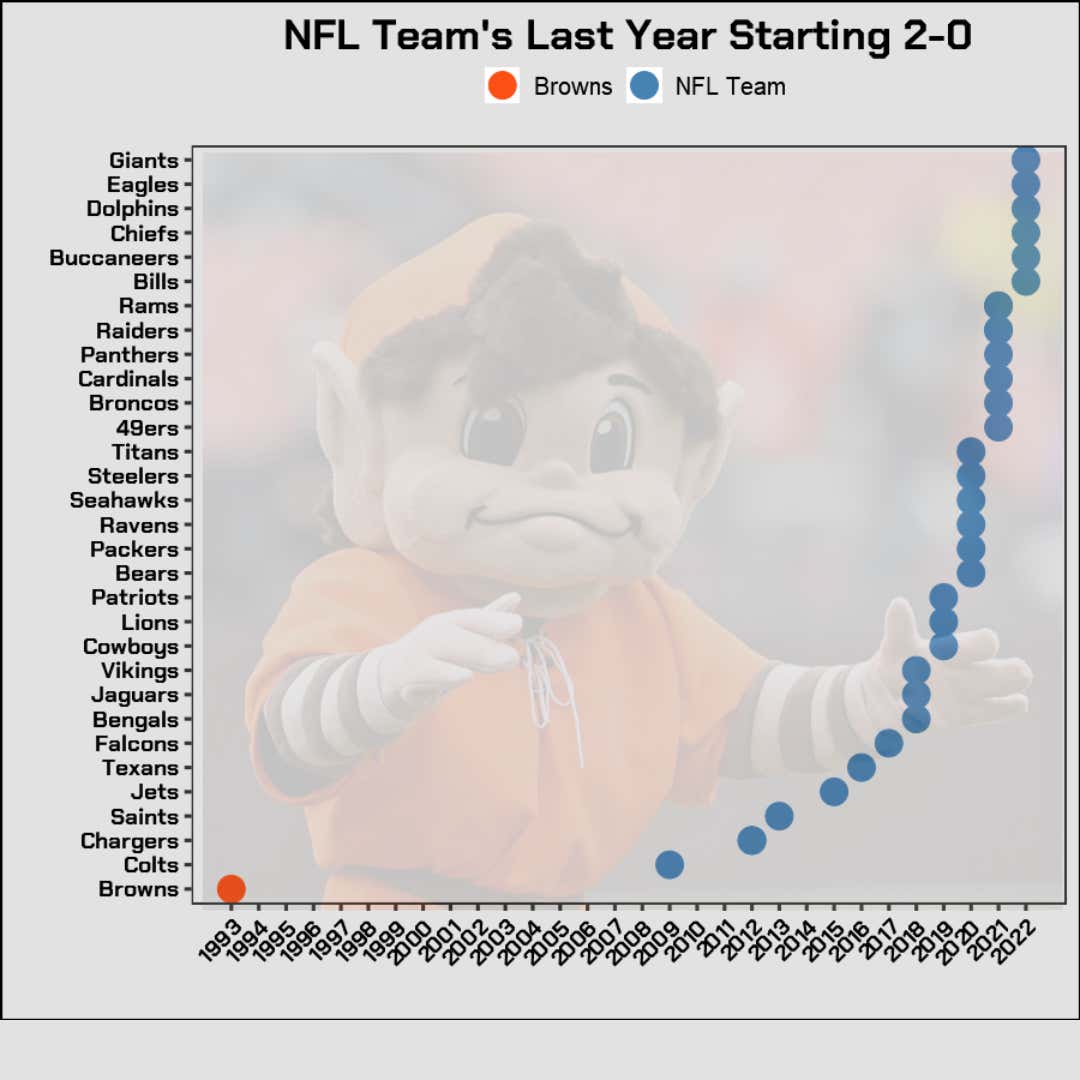 Five Sad Stats: NFL Week 1 was a hit, so I'm back at it for Week 2 and once again the NFL didn't disappoint on the material. The idea here is to provide an outlet for hapless fandoms to look past their team's warts and focus on the warts of others. Basically, if you have a glass house, I'm here to hand you some stones. Your house is going to get hit eventually anyway so what the hell? And real quick: If you like this type of content I have a small sample of sports humor blogs and am trying to make a name here, so I invite you to give my page a browse. It won't always be NFL stuff - but tis the season.

Let's get to work.

I'd like to welcome all the Broncos fans back this week after excusing them from Week 1. Let this be a soft and subtle invitation to Browns fans to find the door. On second thought, who am I kidding? You already saw the thumbnail and, let's be honest, this is probably pretty mild stuff for the scarred and callused members of the Dawg Pound.

Sad Stat #1: The Cleveland Browns haven't gone 2-0 since 1993 (16 years longer than the team with the second worst streak)

You saw this coming by the graph above. I mentioned last week being disappointed that all the fun sad Browns records were going to slowly fade away as this team continues to trend towards relevant, but it turns out this little gem is holding on strong. What a brutal way though to continue faltering out of the start of the NFL season gate. The Browns had Sunday's game vs the Jets in Brownie the Elf's bag. Nick Chubb put the last nail in the coffin with 1:55 left to give the Browns a 13-point lead before kicker Cade York turned the hammer around and pried the head of the nail just enough on the missed extra point. And that's all Elite Joe Flacco needed. Down 13, Flacco led the Jets to back-to-back touchdowns with a successful onside kick in-between to kick Brownie the Elf back to the Island of Misfit Toys where he belongs. You might think this comeback a miracle, but any member of "Elite Joe Flacco" Twitter should know this isn't the first time Joe scored two touchdowns in the final two minutes to win a game. In Week 14, 2013, he put up two touchdowns in the final 2:05 in the most Joe Flacco way possible by having not scored any offensive points since the first quarter.

Anyway, the Browns in-game win percentage maxed out at 99.6% on Sunday. That's how close they were from ending one of the most embarrassing team records on the books compared to the rest of the field. But as you now know, Joe "Jesus" Flacco didn't need three days to work a miracle. He just needed two minutes and .4% to make the impure Browns pay for their sins and keep the shame of not going 2-0 since the early days of the Clinton administration.

Sad Stat #2: Jacoby Brissett is one of 39 quarterbacks to complete 81.5% of his passes in a game and still lose

22/27 passing is not a bad day in the office for a game managing backup of any team let alone the Cleveland Browns. But this is why having a top-quarterback is so critical. So critical that - and I'm not naming names here - some teams will sell every last bit of their soul to the devil to acquire one. As for Jacoby Brissett - he was about the best version of Jacoby he could be. Well guess what? That might work when playing a quarterback like Baker Mayfield in Week 1, but when you face the Super Bowl winning elites whom sometimes find themselves as backups on the New York Jets, being a good game manager isn't going to cut it.

Shoutout Matt Ryan and Steve Bartkowski for both having three games on this 39-man list of 81.5% completion losers.

Sad Stat #3: Justin Fields has the lowest attempts/completions/yards for any game in the first two weeks. He also has the second least in all three 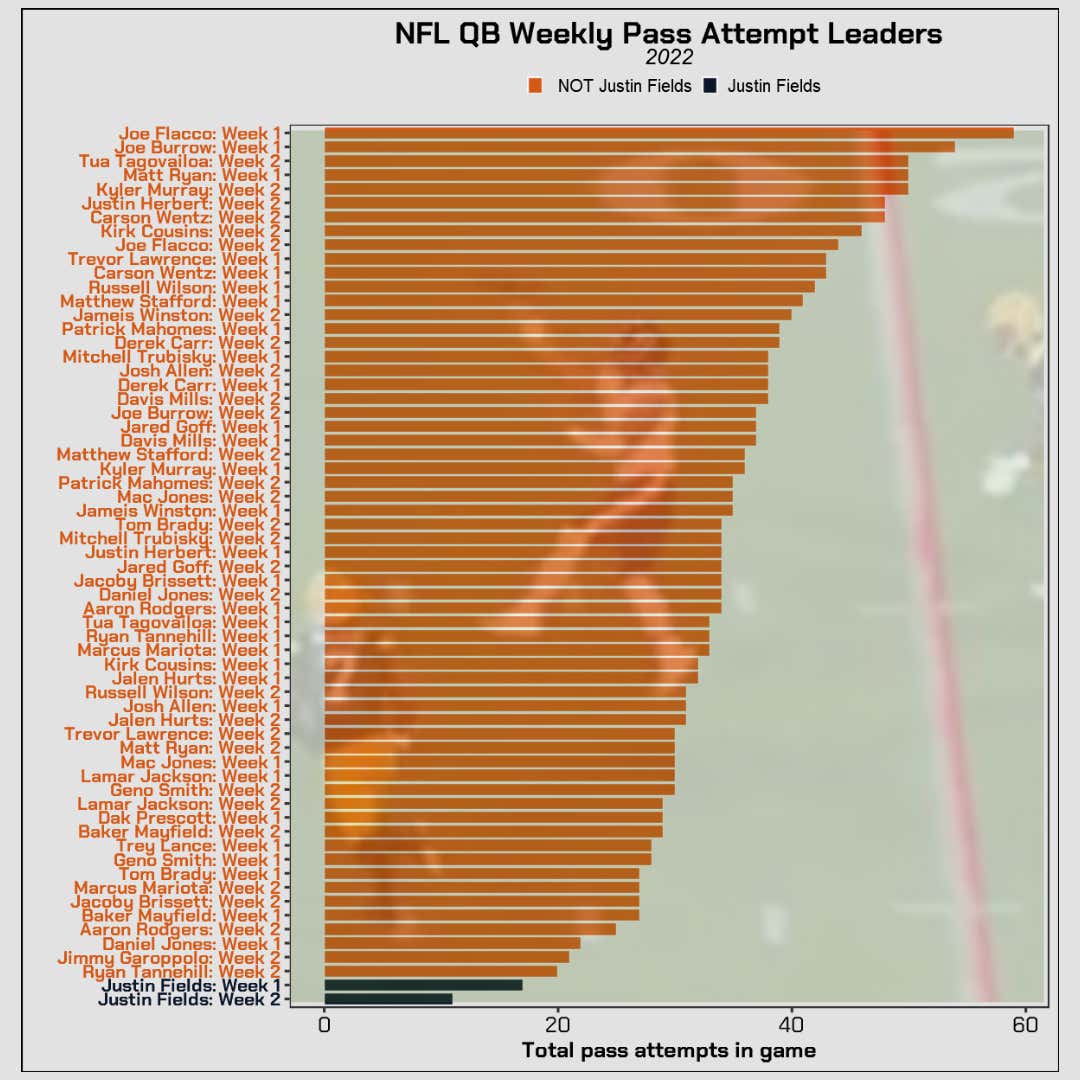 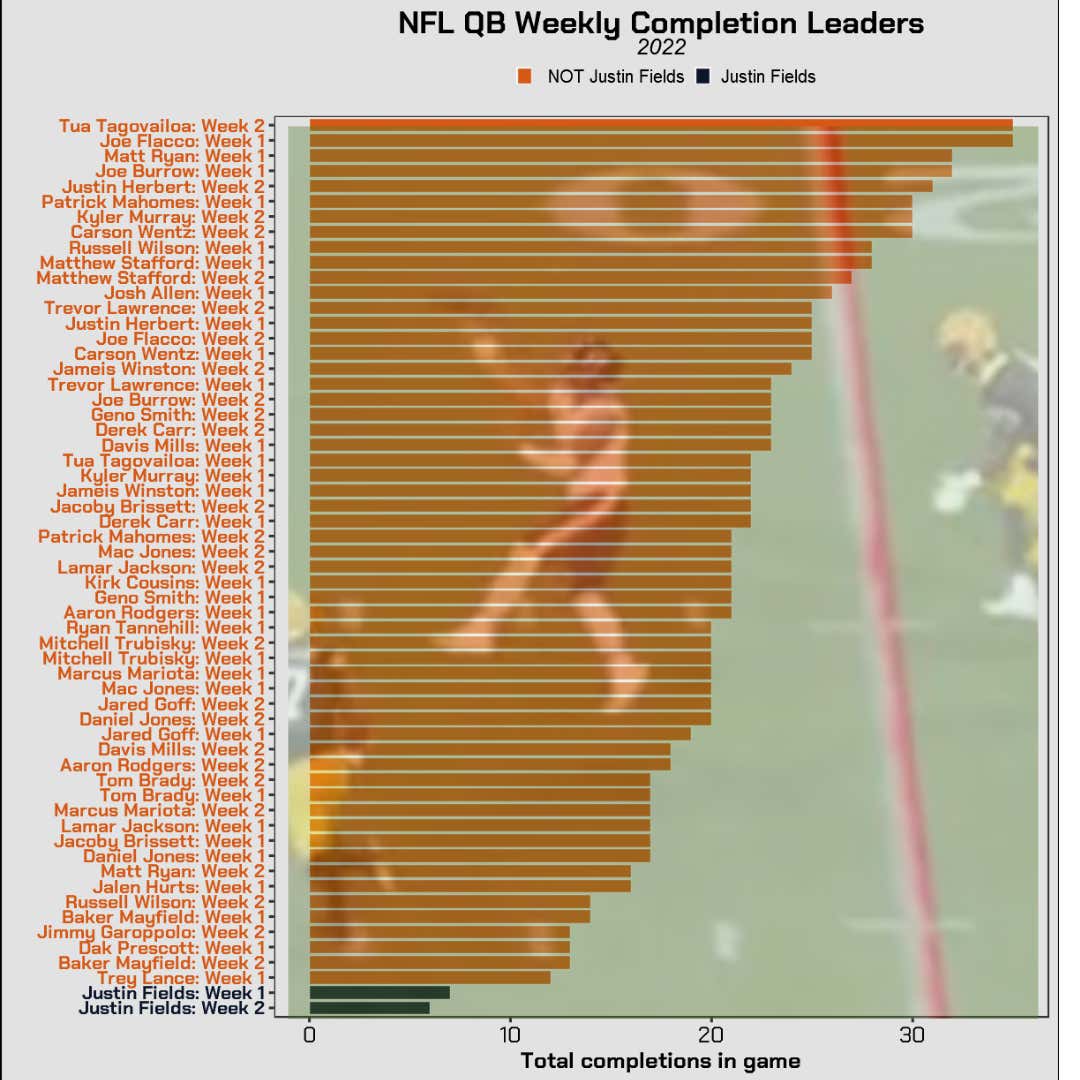 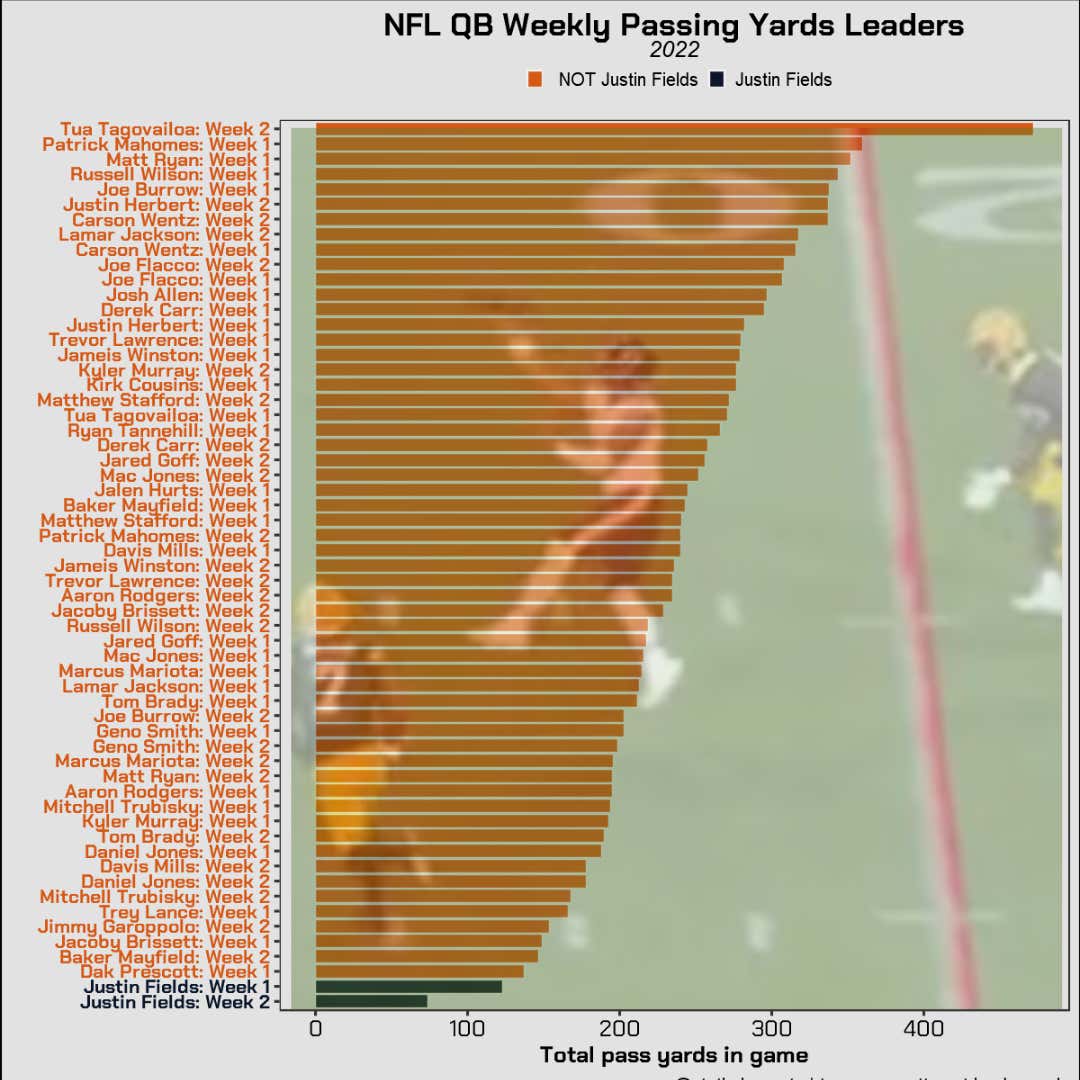 Friendly reminder that Justin Fields is a high first-round draft pick that the Bears traded multiple future firsts to select so his arm could sit on the shelf longer than Brownie the Elf at a Cleveland gift shop. I've never seen anything like this. I get that Week 1 was played in a monsoon, but I can't help but feel that in a rebuilding year it might be a good idea to try to build something. But here's the worst part. As a 30-plus year victim by-Bears-fan myself, I can't even be mad at the coaching staff. At least not for this. The Bears ran the ball effectively Sunday night and the few Justin Fields passes had me wondering if he was Henry Burris's son. That's not a fun feeling. That's a sad feeling.

Sad Stat #4: Joe Burrow has been sacked 13 times so far - the NFL record for the first two weeks is 16

The Bengals Super Bowl hangover loss is hitting them like a 35-year old who thought he could rage like he was 23. Not that I'd know. It's one thing to start 0-2. It's another to lose against Mitch Trubisky and a backup quarterback. So, two backup quarterbacks. Joey Harrington was the last quarterback to be sacked 13 times in the first two weeks in 2007 while this happened to David Carr in multiple years. Sacks are very often a quarterback stat, but this offensive line has put Burrow at the bottom of the barrel in time to throw. They flat stink. And things don't get much better when they travel to play the Jets where they gave Mike White his 15 minutes of fame last year. This team should not be making cameos in a sad stats column so they better figure their shit out soon.

Sad Stat #5: The Vikings are on a 6-year Week 2 losing streak

The sad part here is that before this week the Vikings had plenty of friends to share this 5-year Week 2 losing streak with in the Eagles, Jets, and Giants. But all three decided to find happiness in Week 2 leaving Kirk Cousins in a situation I think we all imagine Kirk Cousins might find familiar in the friend department.

That's it for Week 2. For all my fellow sad fandoms out there, I hope this segment provides the weekly therapy session you need to get through another sad season. Things will get better eventually. I think. One day Browns fans that haven't yet completed college will remember when their team started 2-0. When that day comes, they can celebrate by buying a Brownie the Elf gift shop doll - it'll still be there. But for now, let's make this interactive and help each other get through this together. Don't be afraid to throw some sad stats of your own in the comments from your sad team. If your Justin Fields, you can just hand it off instead.