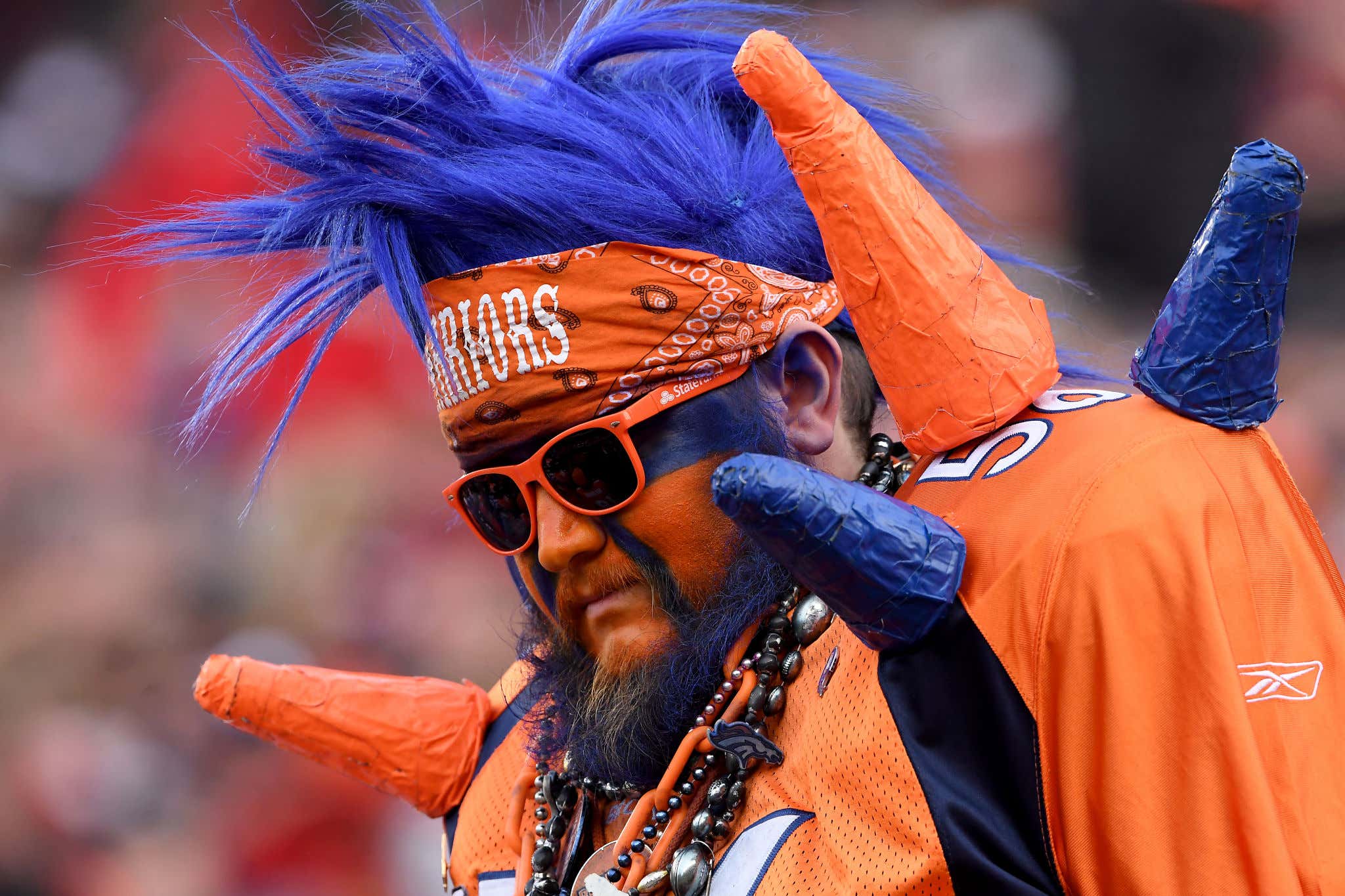 The fact of the matter is that sports are sad. Not pathetic sad. More like, my team is probably going to be bad sad. If not now, then soon. Only one team out of some thirty in major sports ultimately wins and even the winner only gets a short time to celebrate before the next season when they will likely then lose. Unless they're the Tom Brady era New England Patriots in which the prize for winning just about every year is that everyone hates you.

This new blog segment is all about leaning into this fact with a few sad stats from the past week in the NFL. Regardless of what team you root for, things are going to end up sad soon enough. The idea is that you can read about other team fuck ups and feel less bad about your team. Having said that, probably a good time for Broncos fans to dip now before it's too late and just check back in next week.

Sad Stat 1: Mike Tomlin burned his first challenge within the first minute of the season

Mike Tomlin is actually one of the more accurate coaches in career challenge percentage (42%) so he decided to give it a whirl in Week 1 with 14:21 left in the first quarter on a Mitch Trubisky completion he felt was good enough for a first down. No luck as the play was upheld. I get there is a lot of anticipation to start a new season after being around the same guys for months in camp, but let this be a learning lesson to wait longer than 39 seconds into the first date before letting the red rocket fly out of your pants.

Coaches will be coaches though and we really shouldn't be surprised that 39 seconds isn't even the quickest failed coaches challenge of a season. Both Mike Martz (2005) and Jimmy "Premature" Johnson (1999) emasculated their challenge domain with all 15 minutes left in the first quarter of a Week 1.

To Mike Tomlin's credit, he also outlasted Bills coach Doug Marrone by three seconds in 2013 when Marrone was seduced by seeing what he thought was Patriots running back Steven Ridley's loose ball.

Sad Stat 2: There were 11 missed 4th quarter kicks in Week 1

It was a kicking bloodbath this week after Denver's complete master class fail last night (oh, we'll get to it) making a total of eleven 4th quarter missed kicks (field goal or PAT) in a single week. The only week with more missed kicks over the past two decades was just last year in Week 5 with 12. Three off these same kickers were back at again this past week including Evan McPherson, Rodrigo Blankenship and - goes without saying - Fat Randy Bullock. 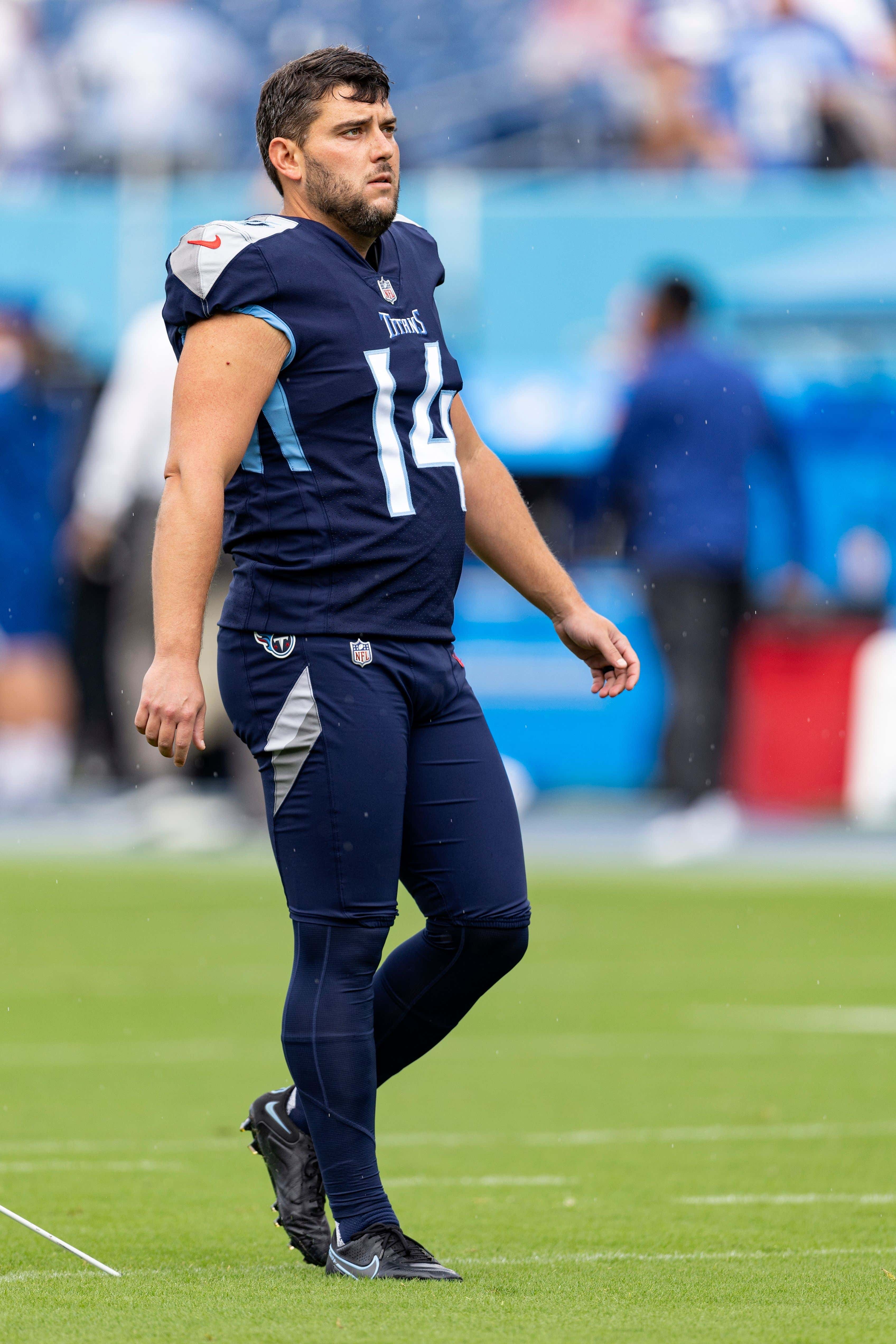 Some kickers are wide right. Some wide left. But Fat Randy will also be wide middle.

Sad Stat 3: The Broncos spent 51 seconds between the start of Russell Wilson's final play and the time out at :20 left.

Nathaniel Hack It's original sin from Monday night was the complete mismanagement of the clock. I get he was going field goal all the way but we'll get to that soon. :51 passed from the start of Wilson's final play on the field until Hack It's first timeout to set up the field goal. I ran the numbers and this was the most used time between plays for any team down less than three in the final minute and a half of a game while being nowhere near field goal range. Here his record stands atop as undisputed procrastination king: 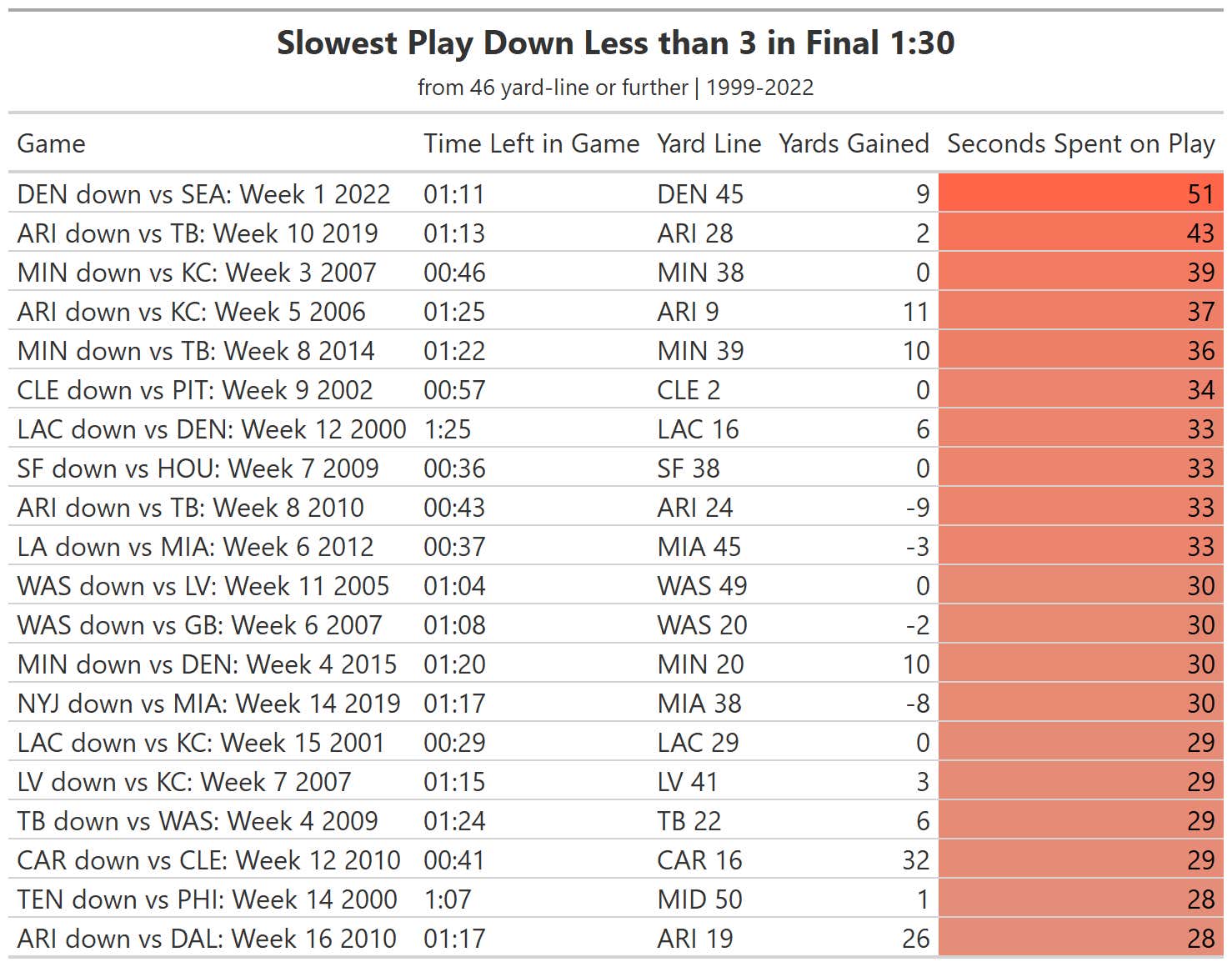 Sad Stat 4. I counted a whopping 2 made field goals of 64 yards or longer out of 26 total tries in modern NFL history

But sure, why not send Brandon McManus out to kick the 64-yarder, watch him miss miserably on the icing timeout, and let Russ order take-out on the sideline. Two total NFL 64+ makes out of 26 gives us the best estimation for McManus's chances based on history: 7.6%. Even kicking legends like Jason Elam, Sebastian Janikowski, and Justin Tucker have come up short while Tucker is also one of the two who actually made one.

Some quick cocktail math here: My data shows 191 times a team went for it on 4th and five from between the opponent's 35 and 46 yard line (Denver was on the Seattle 46). The conversion rate was 41%. The story doesn't end there though as even if the broncos converted the 4th down they still had to make a field goal afterwards.

Had Denver only made a meager five to nine yards on that 4th down, they'd have been looking at a 49% chance of making the field goal based on all kicks in this range. All in all, the grand 4th down conversion/field goal combo likelihood is about 20%. Compare this to 7.6% and it's pretty obvious that Denver going for it would have been - to quote the movie Argo -  "the best bad idea we have sir by far". Instead, Hack It abandoned Denver's offense on the sideline for dead.

Sad Stat 5. Denver's two timeouts after the missed field goal kicked were the saddest of them all

Yep, the Broncos irreparably blew the game, yet somehow have one more sad stat on the list. Hack It had already gone full blown clown by this point so to keep that energy going he used two timeouts with :13 and :09 left despite having no chance to get the ball back. As an academic of sad timeout tracking, Monday night's sequence of purposeful clock stopping might be sadder than this list sorted by most points trailing: 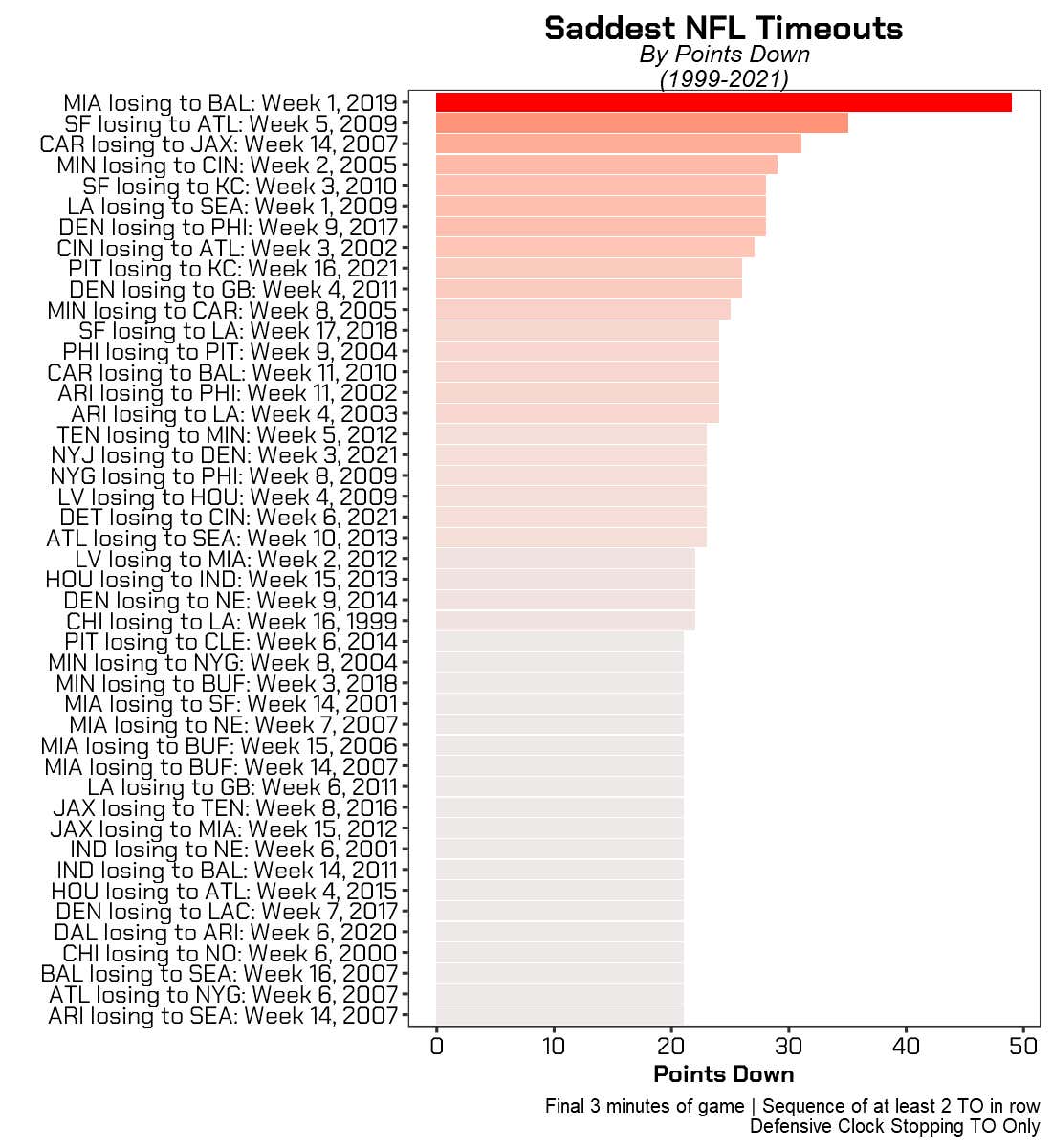 That's a wrap a for Week 1. Hopefully Week 2 goes better for Bronco country so they can get back to "LET'S RIDE" energy after a sad week of "LET'S HIDE".