No, today is not Festivus, but it’s a miracle nonetheless.

Kanye announced in a classically bizarre way, including shots of Queen Elizabeth in the slide, that he’s releasing all his grudges today. In her honor I guess? Jerry blogged this earlier as Kanye squashing his beefs in honor of Her Majesty's passing. However, I think it may be an excuse for Kanye to go, in his words, H.A.M.

I know you may be asking why. Well...

The three biggest grudge guys I know of are:

As far as I know, there’s no coming back once you’re on Kanye’s grudge list.

As for Portnoy, myself and Francis are the only two people I know to ever come back from the dead on his list.

And the only way to get off White Sox Dave’s is by force. Essentially baiting him into confronting you in public, and then emasculating him on camera.

But leave it to Queen Elizabeth dying to change Kanye’s perspective on shit. I guess Kanye’s a “Royal” guy? Who would have thunk? Sure she lived to be 96 (one of the many luxuries of being a vampire). But Kanye’s right. Life is short. Holding on to grudges and seeking revenge reminds you of the old saying “it’s like drinking poison and expecting the other person to die.”

Now, do I buy for one second Kanye truly means what he’s saying here? That he’s releasing all the pent up hate and animosity he has built up over the years for dozens, if not hundreds, of people, places, and things?

Not for one minute, no.

But we can hope.

Here’s a list of some of the grudges I’m most looking forward to Kanye airing out today and “releasing into the light”.

You may be asking yourself “what the fuck?” Why does Kanye hate a children’s cartoon character?

I’ll tell you why.

Shortly after the DONDA release, the official Twitter account for Peppa Pig seemingly shared a shady message for the artist now known as “Ye”, in a now-deleted message.

“Peppa didn’t need to host listening parties in Mercedes-Benz Stadium to get that .5,” the account for the children’s TV series wrote at the time, alongside side-by-side screenshots of reviews of DONDA and Peppa’s Adventures: The Album. 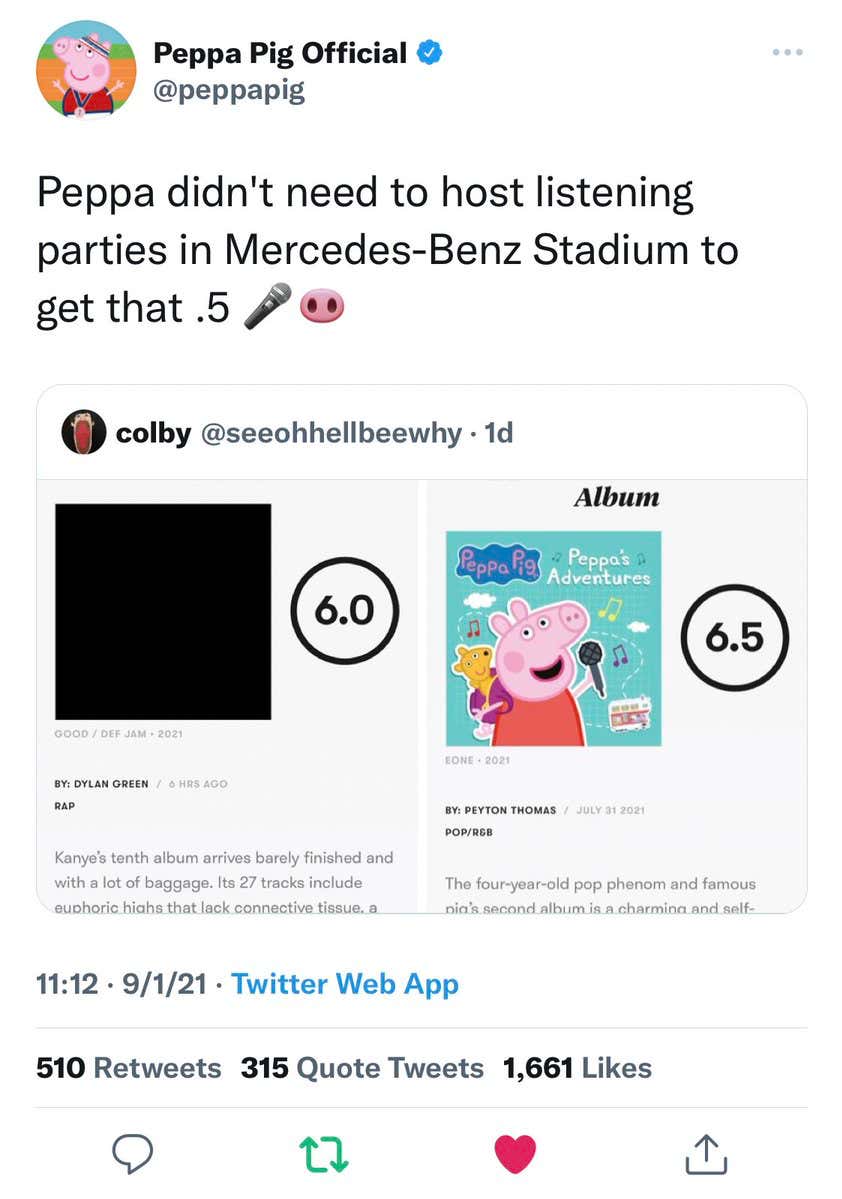 That’s a facial if I’ve ever seen one (a Peter North-esque one if we’re being completely honest). So you can understand why Kanye would have Peppa on his list.

Sidebar - of course Pitchfork did this. The most bitter, unhappy, hateful, miserable people on the planet all work at that place and hate anything most people like, and love things everybody else hates. All so they can tell us why we suck and they don’t. Fuck them. 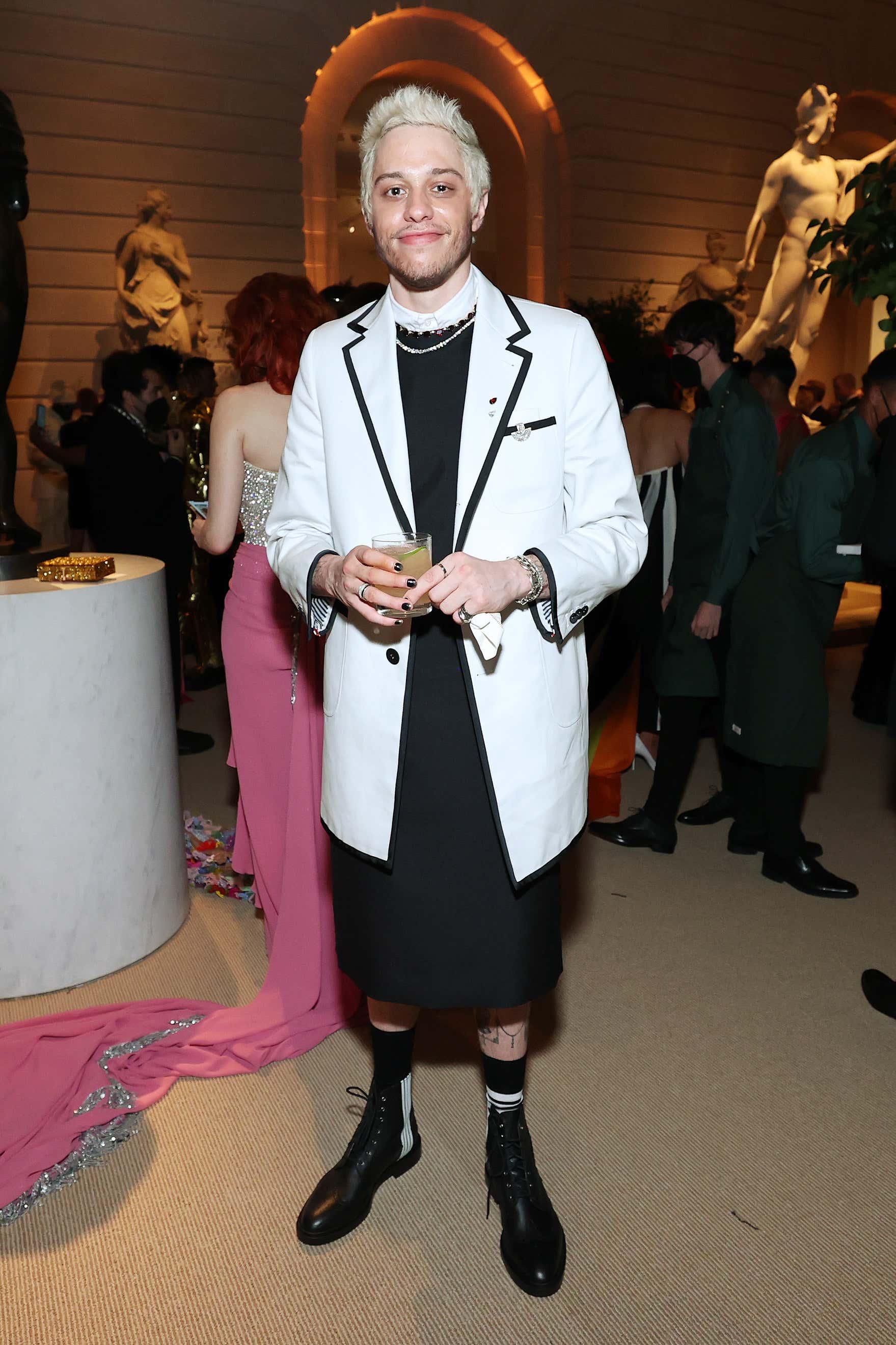 There’s just no way I see this creep getting left off the hook from Kanye. Guy thought he was a badass texting Kanye “I’m in bed with your wife”, and getting his kids’ names tattooed on his body (major creep vibes). I don’t care how holy of in line with the universe you’re feeling, that stuff isn’t so easy to excuse.

I blogged extensively about this the other day. But essentially, Kanye caught Adidas selling shelved designs of his, and alterations of his, without his name brand or logo on them and went ape shit.

This one will be more likely to repair, since Adidas is sitting on mountains of money and money is the way to Kanye’s heart (he also said so much in an instagram post naming his demands). So this is a relationship and grudge I can see Kanye letting go of. 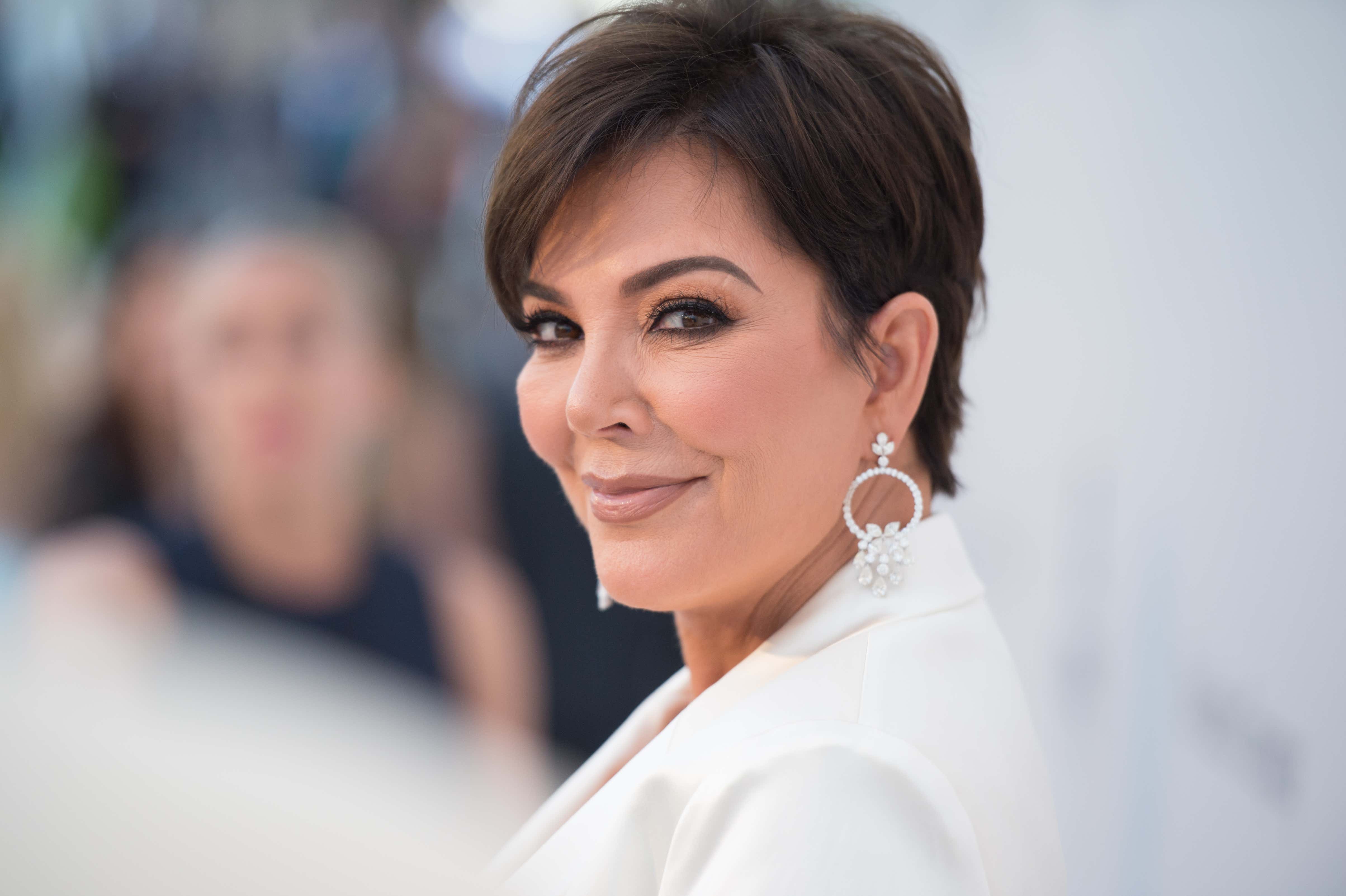 Another grudge I selfishly don't want to see die.

This creature embodies all that is wrong and evil in the world, and to this point Kanye has been the only public figure to call her out for it or stand up to her. It's basically like Leia sending her hologram message toObi Wan via R2 at this point- Kanye, "you're our only hope." Please don't fold. 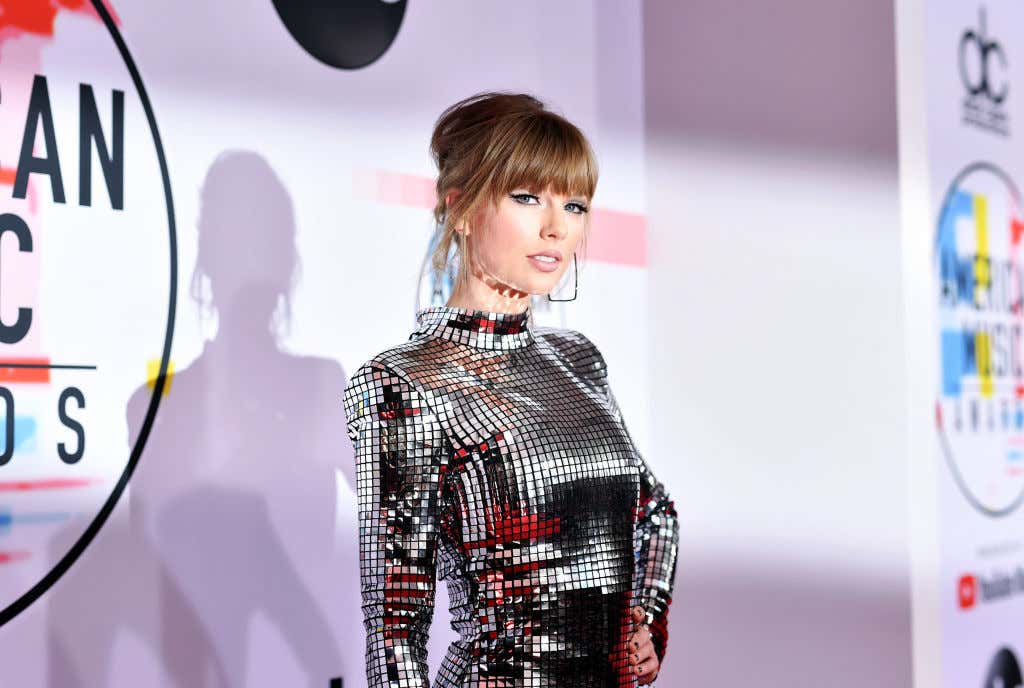 This one I honestly couldn't care less about anymore.used to feel horrible for Taylor Swift. Thinking she was the victim of an unfounded and uncalled for bullying campaign. But she managed to take that good-will, and expand her empire with it. She recorded an entire album and tour based solely around Kanye and Kim's poor treatment of her. She's since she'd her "innocent" attitude and adopted herself into a circle of some of New York, and Hollywood's most obnoxious (and talentless) circles. The exact thing she prided herself on NOT being about back in the day.

At this point this entire "feud" seems way played out and contrived. Yawn.

This is one I feel like the average Joe doesn’t realize exists. Yes these two were seemingly best buds for a while. Kanye looked up to Jiggaman as an idol, a mentor, and helped to get him his start. But after the duo recorded “Watch The Throne”, everything went to shit.

While the Roc Nation founder mentored West for many years, the pair had a falling out after the “Yeezus” rapper upstaged the “Lover” singer’s VMA victory and name-dropped the “Crazy in Love” artist’s wife in his rant. Since then, the pair have shared jabs at one another, with the New York native calling out West on his 4:44 album in 2017. Afterward, West removed his entire discography from Jay-Z’s Tidal before Jay-Z admitted that the duo have a brotherly rivalry that July.

Let’s patch this one up fellas. There’s bigger fish to fry and you’re more powerful as a team than being divided. 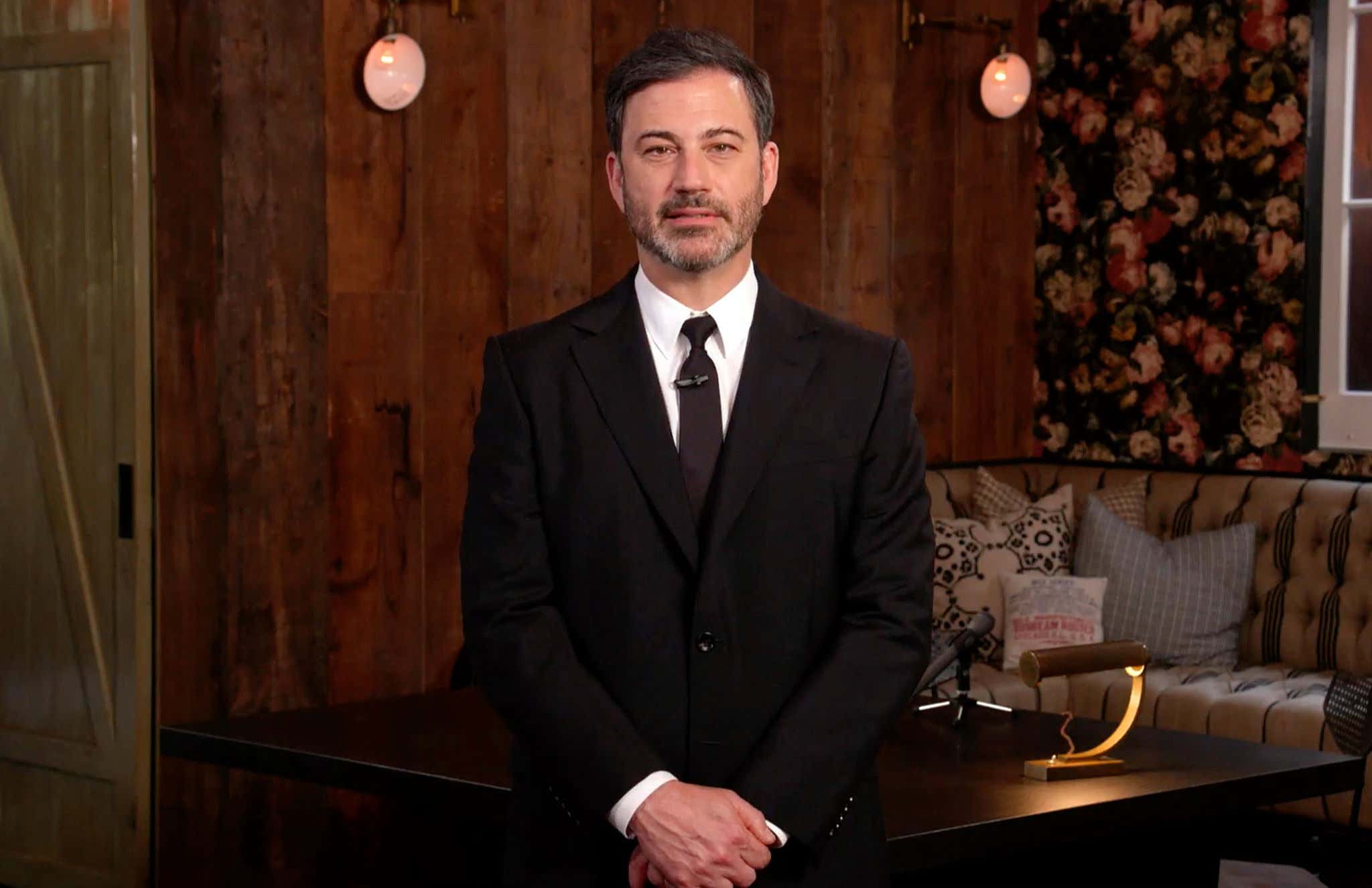 This is one of Kanye’s more entertaining feuds and one I’d like to see play out some more. If only to get more epic Kanye twitter rants.

US Weekly- The rapper, 36, launched an epic Twitter tirade on Thursday, Sept. 26, after Jimmy Kimmel aired a parody of West's BBC Radio 1 interview with Zane Lowe, in which he called himself the "No. 1 rock star on the planet" and compared himself to Wreck-It Ralph's Vanellope von Schweetz.

Kimmel's parody, titled "Kanye Kid Re-Kreation," featured two little boys reenacting parts of West's interview while sipping on milkshakes. "I've reached a point in my life where my Truman showboat has hit the painting!" mini Kanye exclaimed. "I'm not trying to regurgitate myself!" 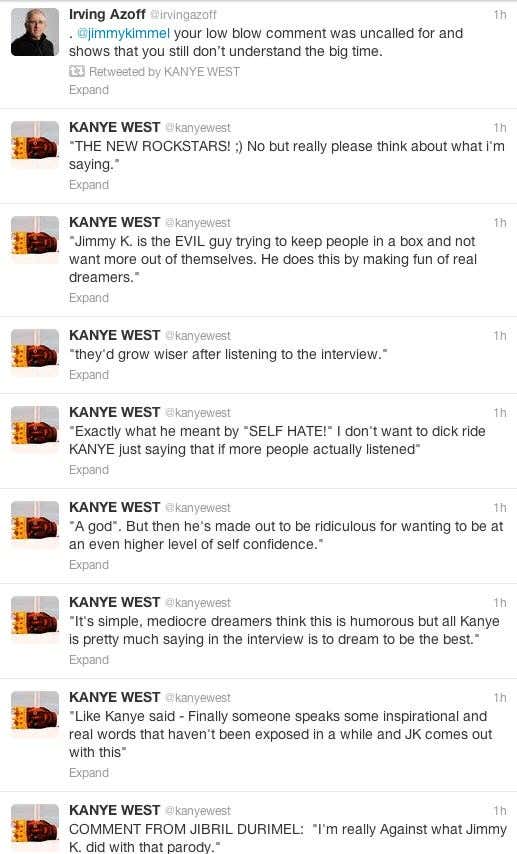 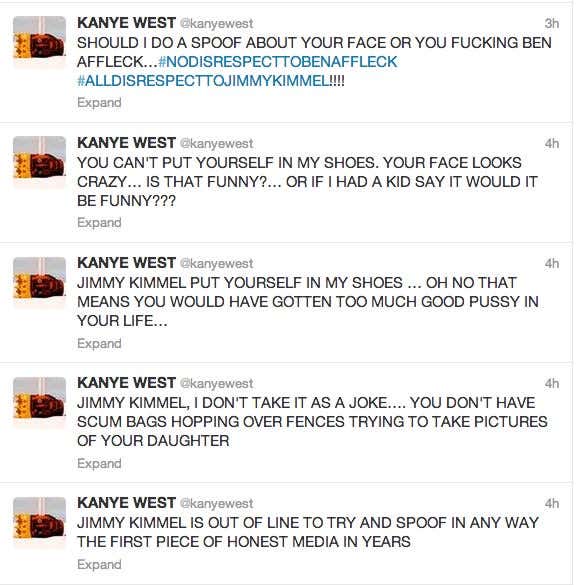 (The too much pussy line made me lol) 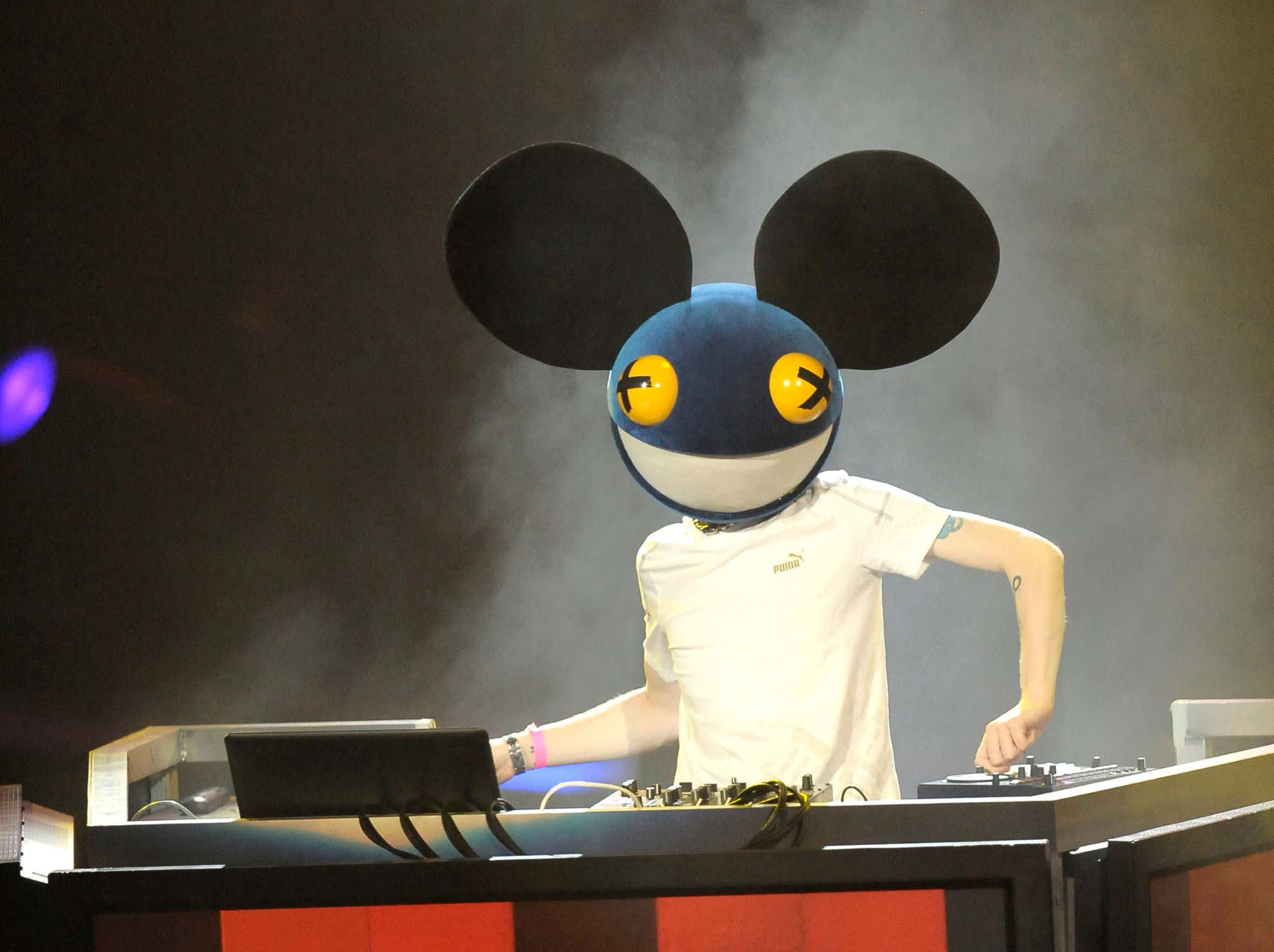 The DJ got into a heated Twitter exchange with West after  shared a snap of the file-sharing site Pirate Bay, which had a link to Deadmau5’s editing software Serum pulled up.

"What the fuck @kanyewest … Can't afford serum?” Deadmau5 tweeted in March 2016. “Let's start a Kickstarter to help @kanyewest afford a copy of Serum. … He needs a small loan of 200$ #prayforyeezy.”

The battle intensified as West dragged daughter North into the conversation, writing back, “Do you do birthday parties?? My daughter loves Minnie mouse.” 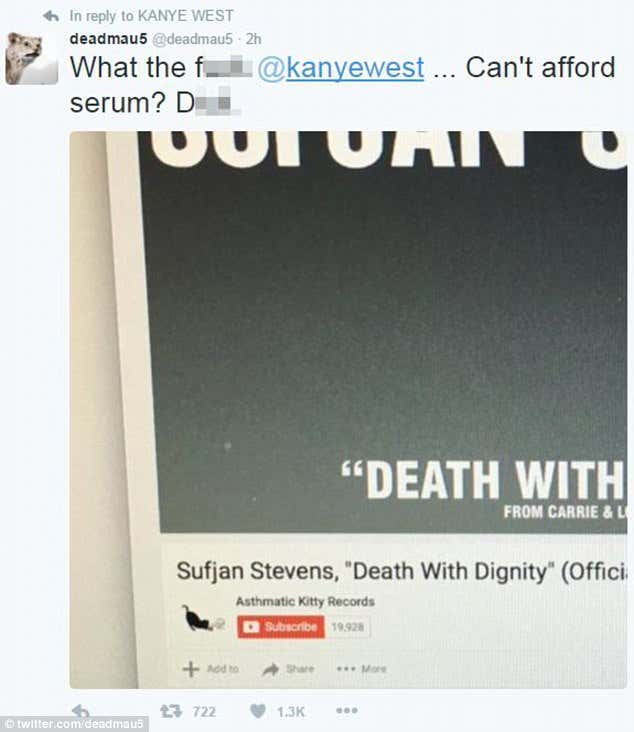 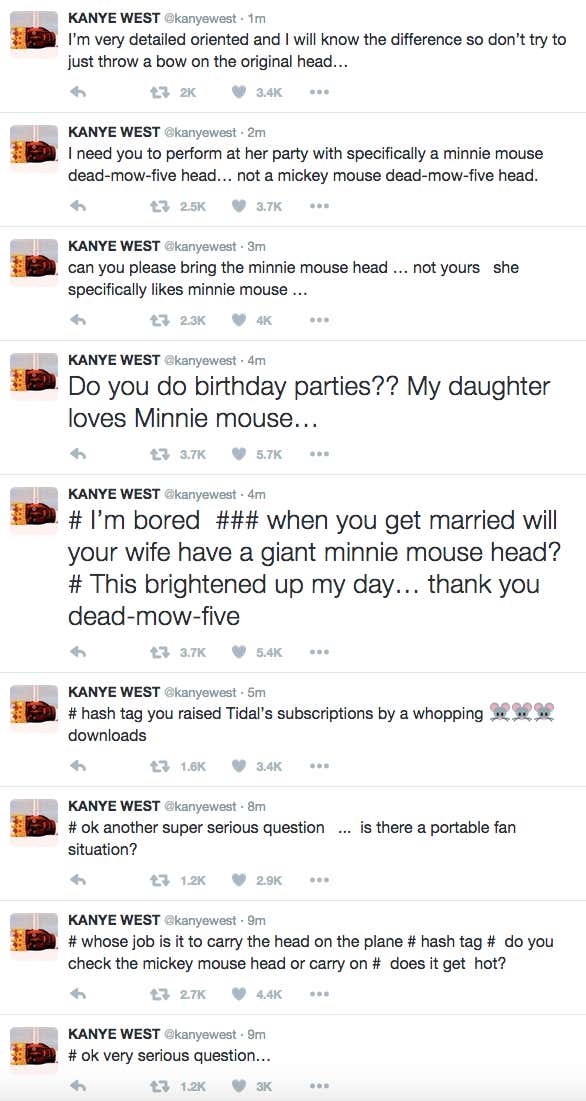 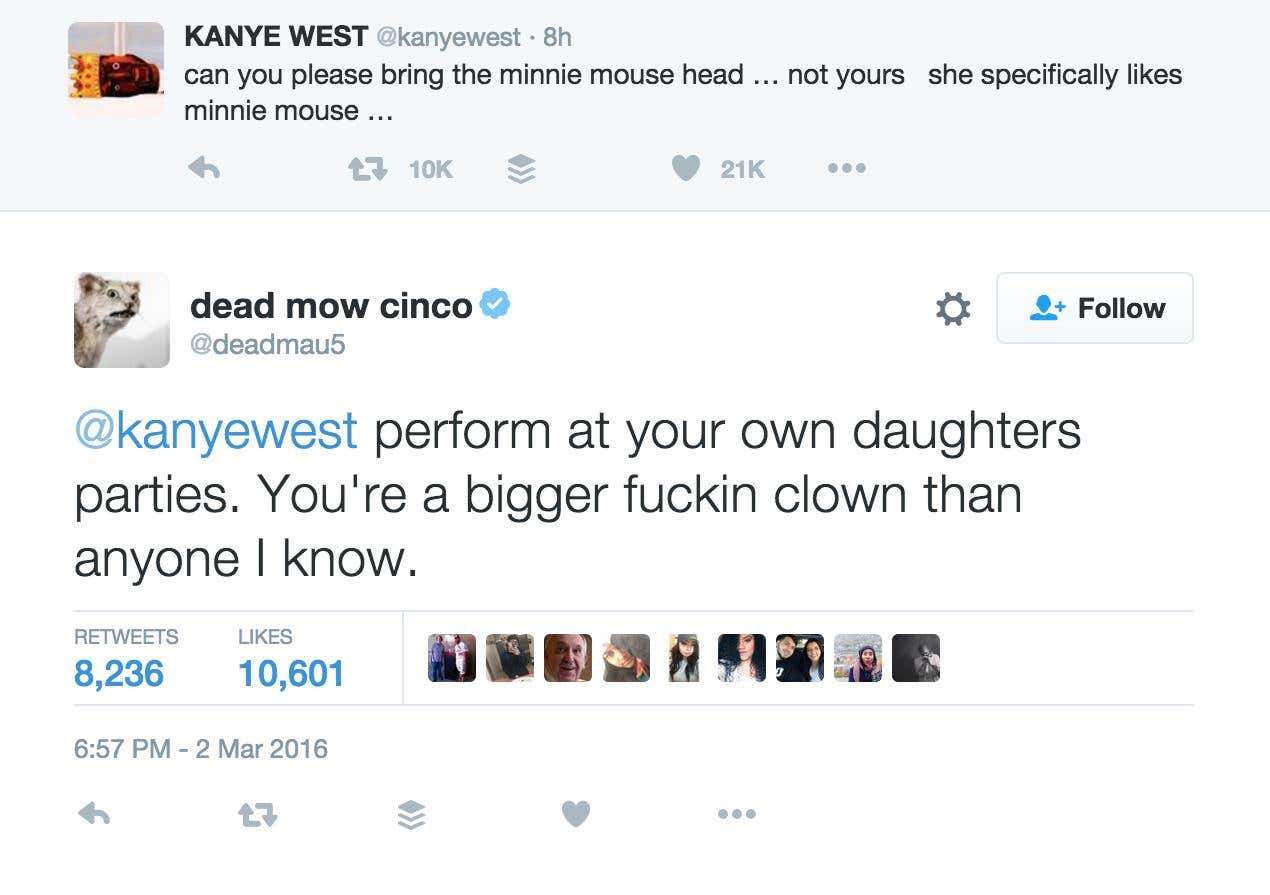 I’m running out of battery on my phone, on terrible wifi in Italy right now, and Jerry just started a blog on this same topic that will probably go up before this, if this goes up at all, so “Imma finish.”

But this is another beef there’s no way gets squashed. Kanye could (but won’t) release his grudge against Cudi, and forgive him, but there’s ZERO chance Kid Cudi burries the hatchet on his end.

Kanye took this entire thing wayyyyy too personal, and dragged it out way too far.

This all started because Cudi stayed friends with Pete Davidson once he started dating Kim Kardashian.

Everybody has that one buddy who refuses to completely write off their ex once they break up, because he knows you’ll probably get back together and doesn’t want it to be wicked awkward having to apologize for telling her she was dead to him and the rest of your friends for leaving you, but that guy was Cudi. And that girl was Pete in this instance. Kanye took this as an act of betrayal and went out of his way to destroy Kid Cudi’s career. Way out of line.

Just last week he invoked the poor guy into his war with Adidas for absolutely no reason.

The "Day n' Nite" artist gave an update on his fraught relationship with West during an August 2022 interview with Esquire. "With all due respect, I'm not Drake, who's about to take a picture with him next week and be friends again, and their beef is squashed. That's not me," he told the outlet. "What I say, I mean. I will be done with you. It's gonna take a motherf–king miracle for me and that man to be friends again. I don't see it happening. He gon' have to become a monk."

So yah, that one’s not ending. But we can be optimistic and hope.

That’s just the tip of the iceberg here folks on who Kanye hates and who he’s supposedly letting off the hook today.

Again, take what you may from his claim. But I’m not putting much stock in it.

Here’s more names on his list that I either don’t know enough about the history of the grudge, or don’t have the battery life to discuss.

p.s.- sidebar on my “Kanye must be a “royals” guy comment. This is something I’ll never understand for Americans. Or anybody outside Britain. People know this is a fake “monarchy” at this point and has been for over a hundred years right? These people are inbred, propped up, empty suits, who hit the sperm lottery. We fought a fucking revolutionary war to rid ourselves of these dentally disabled assholes and for some reason the whole worlds obsessed with their every move? (Yes I get the irony of that statement having just written 3,000 words on a rapper from Chicago. But you get the point). I feel like I’m taking crazy pills