Daily Mail- A real-life boxing battle royale has taken place in Russia over the weekend with an insane 600 versus 600 brawl held on a field just outside Moscow. The event was called Walk the Field and was a tribute to Ivan the Terrible and his victory at the Battle of Molodi 450 years prior. It is also believed to be a world record for the most combatants fighting at the same time.

I know that Russians have been seen as the enemy to us Americans pretty much ever since I was a little lad growing up in the 80s. Various countries in the Middle East came for the number 1 spot throughout the years along with the always present specter of China. But Russia has always been the Goodell to our Portnoy.

All that being said, goddamn that was awesome. Beautiful yet chaotic violence paired with the very important safety measures of head gear with gloves all in some of the unlimited land of Russia that spans 11(!!!) time zones. The actual punches may have been thrown with the precision of a 3 AM bar fight at a dive bar. But the wave of humanity charging each other took me right back to the final battle from Endgame, which I will ALWAYS post in a blog if I have a chance to.

Seeing this brawl I never knew existed gave me feelings I haven't experienced since Dave introduced the Barstool world to Rough N Rowdy.

However, the biggest takeaway wasn't 1200 comrades beating the shit out of each other for the love of violence. It was the people recording it all go down.

Look at that form by the Borises! Horizontal phones with a slight angle that can capture every overthrown punch. As the world continues to shift back to normalcy with people getting out again after a couple of years of being mad online, we are going to need cameramen/women that are able to impeccably record the brouhahas before posting them online. And by the look of it, those phones are going to be in good hands (nice pun Clem, you beautiful bastard).

P.S. I'm not sure which side won the fight, but I can tell you who lost it. This poor son of a bitch that was knocked off his feet before 90% of the gladiators met with fists of fury. 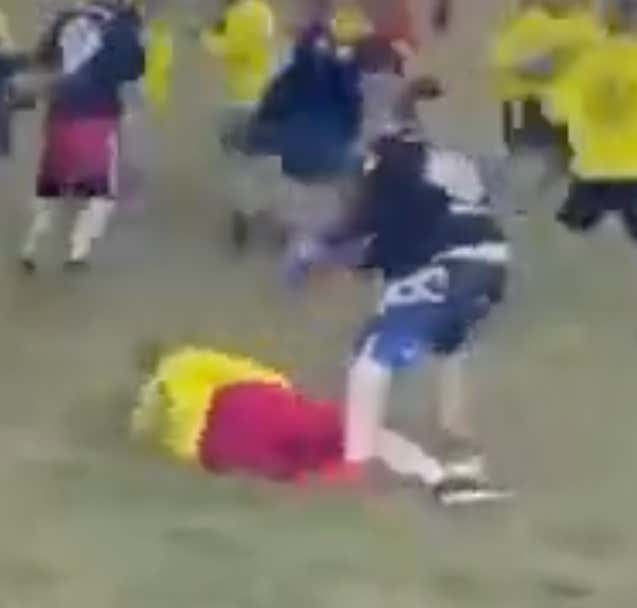