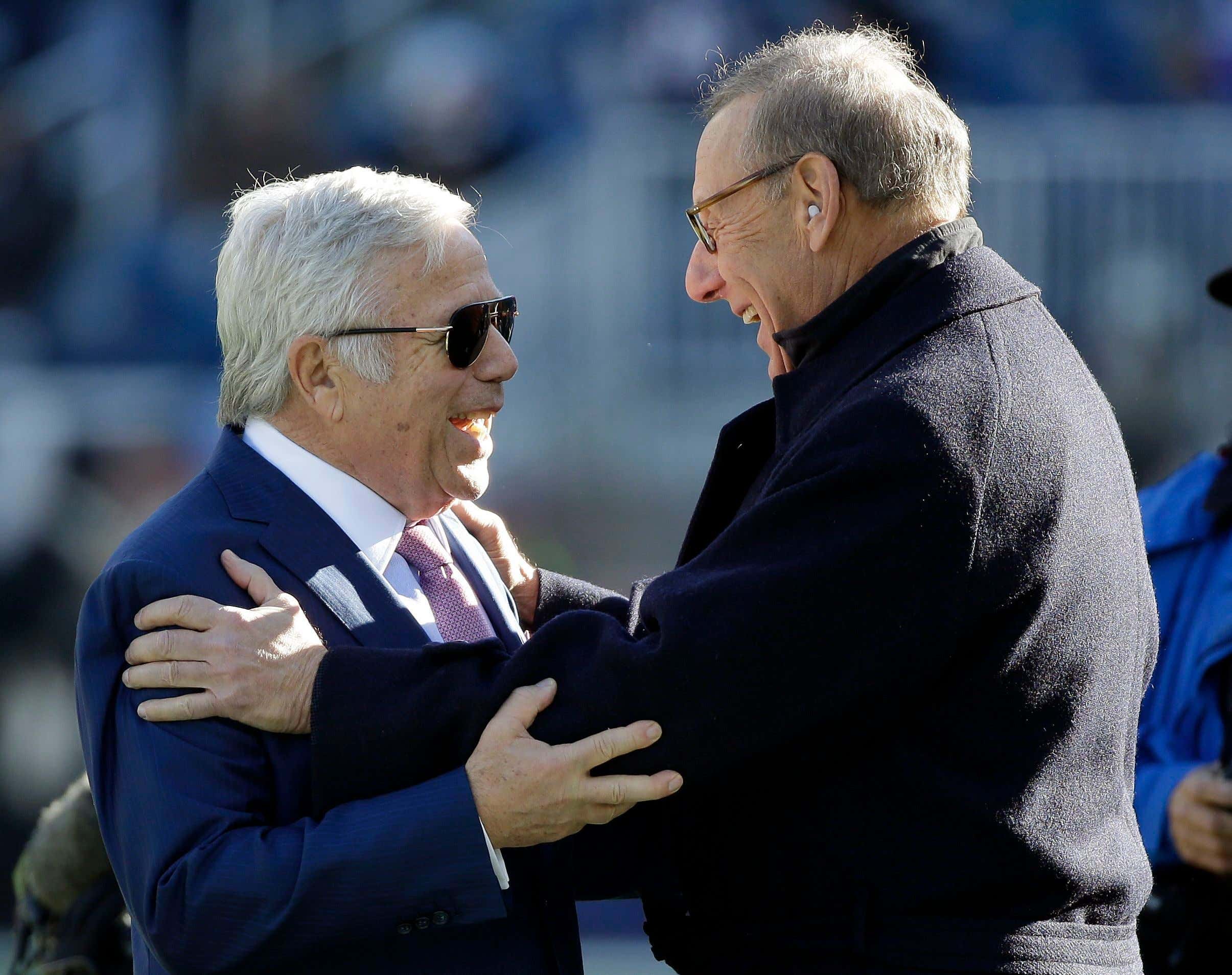 My first instinct upon the news the NFL has concluded that Stephen Ross spent all of 2019 illegally tampering with Tom Brady:

… was to make some mob movie reference. Sonny in A Bronx Tale answering the question of whether it's better to be loved or feared by saying "Preferably both." Or Vito Corelone telling Michael to keep his friends close and his enemies closer. But those are not only way over used, they're not even the best analogy to this situation.

For that, you have to go to Shakespeare. In the Bard's plays, it doesn't matter if you're loved or feared or who you surround yourself with. If you have power, someone's looking to kill you. Henry V uncovered a plot against him and hanged the bastards. In The Tempest, Prospero was a king until his rivals shipwrecked him and his daughter on an island for 12 years. Hamlet's uncle murdered his father so he could become King and bone his mother. Which is actually the perfect analogue for what Mr. Kraft's fellow owner and obvious frienemy tried to do to him.

But unlike Uncle Claudius, this conniving, duplictious prick doesn't even have the decency to feel even a little bad about the obvious betrayal:

Source - On Tuesday, the NFL properly suspended Dolphins owner Stephen Ross for tampering but chose not to take action against him for tanking.

As one league source poetically described the reaction, “Ross is going apeshit.”

Ross also has issued a statement that, frankly, contains some fairly clear flaws. His words appear below.

“The independent investigation cleared our organization on any issues related to tanking and all of Brian Flores other allegations,” Ross said. “As I have said all along, these allegations were false, malicious and defamatory, and this issue is now put to rest. With regards to tampering, I strongly disagree with the conclusions and the punishment. However, I will accept the outcome because the most important thing is that there be no distractions for our team as we begin an exciting and winning season. I will not allow anything to get in the way of that.” …

First, the investigation did not clear Ross and the team on the other allegations made by Brian Flores; he claimed that he was recruited to participate in efforts to tamper with an unnamed quarterback, which was widely known to be Brady. The tampering fine legitimizes the claim made by Flores.

I'll put aside the tampering thing, since it's not relevant to this discussion and because Brian Flores has a personal integrity a lucky spermer like Ross could never comprehend. If he didn't that lying twat would be facing fraud charges and on his way to months of playing tennis against a bunch of insider traders at a Club Fed somewhere. No, all I care about it the tampering.

This upper class doosh thinks HIS team is being done dirty here? What kind of self-entitled twat do you have to be in order to conduct secret talks with the most important player in the 100+ year history of the league while he's still under contract, and act like you're the victim?

To put this in perspective, consider for one hot second what would happen if the shoe were on the other foot. Imagine if Mr. Kraft was conducting secret talks with, say Xavien Howard? And while he's Miami's best player, that's not close to what Ross was doing. Not by an order of magnitude. And yet his "punishment" is about the same as the Patriots faced in 2007 for pointing a camera at the Jets sideline from an area of the stadium other than the designated Pointing a Camera at the Opposing Sideline Zone. Whereas Ross was trying to steal away the best player of all time. One that Mr. Kraft loves like a son. While he was under contract.

So the Dolphins lose a couple of picks and don't have to have that nitwit around for a couple of months. What did the Patriots lose?

Everything. Everywhere. All at once.

Not that Brady would have stayed if Ross didn't come along with his tampering shenanigans. He has said he knew 2019 was his last year in Foxboro before the season began, and I believe him.

But I also believe that team had another Super Bowl run in it. They were the defending champs. They had the No. 1 defense in the league, by a lot. Stephon Gilmore was the DPOTY. Julian Edelman had a career year. At the very least a postseason run was a good possibility. They were 12-3 going into the final week. All they needed was to win a game where they were favored by 17.5, to secure the playoff bye and be two wins away from their fourth straight Super Bowl.

But they lost. And the team they lost to was, of course, Miami. Is it any wonder, given the fact the most hyper-prepared player in league history was provably engaged in contract talks with the visiting teams' owner? As Matthew Slater said about this year's Patriots, a team will take on the personality of its quarterback. Talking about 2022 Mac Jones, that's a compliment. With 2019 Brady, it means they were not fully engaged. He was distracted, and by Associative Property of Quarterbacks, so were they.

So if I'm in Patriots ownership or team management (and someday by the grace of God, I will be), I'm beyond angry right now. I'm shooting lasers out of my eyeballs and fire out of my mouth and bolts of lightning out of my ass. I'm talking to anyone who'll answer an email at the league offices and demanding answers. Not to mention, justice.

So Miami's out a couple of draft picks. That hurts them, but what the hell good does it do us? Those picks should rightly be given to New England, since they're the wronged party in this. It's happened before, where a tampering team had to turn over picks to the tampered team as compensation. To help make the aggrieved party whole again. It's even happened when the tampered player stayed with his original team, just as payment for undue harm.

But that'll never happen. In 2015, the Jets were found guilty of tampering with Darrelle Revis, who not only was a key contributor to the Super Bowl XLIX champs, but the Jets consider their best player since Joe Namath. (I say Curtis Martin, but it's not my fight.) For that egregious crime, the Jets paid a $100,000 fine. Which is less than Woody Johnson made selling baby shampoo in the time it took me to type "a $100,000 fine." They kept all their draft picks. The Pats got nothing. Except the satisfaction of watching Revis stop making any effort and rob Johnson blind.

In this case, fines, suspensions and draft picks aren't enough. The Patriots had their franchise quarterback carrying on substantive talks with a division rivals' owner, and I would leave no stone unturned until justice was done. If not, I'd spill to the world everything everyone in my organization knows about the dirty dealings that went on here. Just blow it all up. Send a message that the days of underhanded dealing right under their noses are done for good.

They can't run the score up enough on this team. Payback has to be a bitch in this case. It just has to be.