His summer music playlist consists of 44 songs, some from current popular artists, including Drake and Rihanna’s “Too Good,” Tems’s “Vibe Out,” Beyoncé’s “Break My Soul,” Koffee’s “Pull Up,” Burna Boy’s “Last Last,” Kacey Musgraves’s “Keep Looking Up,” and Vince Staples and Mustard’s “Magic.”

Older picks include D’Angelo’s “Spanish Joint,” Otis Redding’s “I’ve Been Loving You,” Wyclef Jean and Lauryn Hill’s “Guantanamera,” Prince’s “Let’s Go Crazy,” Rakim’s “When I B On Tha Mic,” and Aretha Franklin’s “Save Me.”

“Every year, I get excited to share my summer playlist because I learn about so many new artists from your replies—it’s an example of how music really can bring us all together,” Obama wrote. 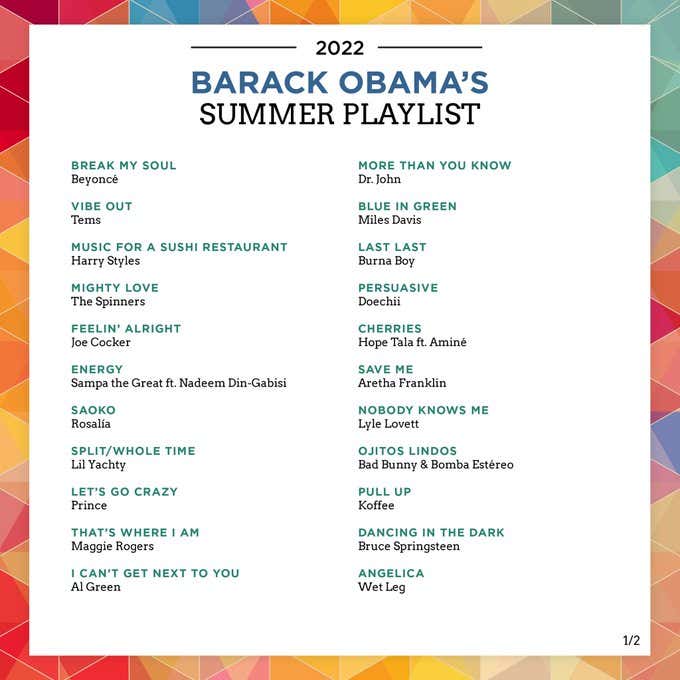 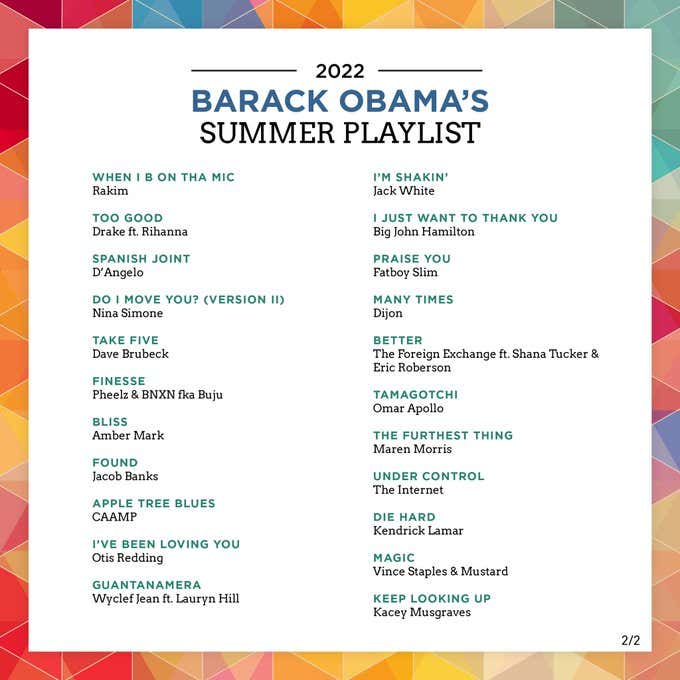 We're back with our yearly break down of the Barry O Summer Playlist.

Let's start off with whats hot on his list.

If you asked me for one guess on what I'd think he had on this years list it would be this song. Obama rides Beyonce and Jay-z's dick harder than Michelle rides his.

A nod to his podcast co-host here. I don't hate it.

I'll be honest, I forgot about this song 'til I saw it on this list. Fire.

As I've stated here before, I fucking love this band. Great tune.

I was just talking about this album (The Carnival) last week with my buddy. Say what you want to about Wyclef but what an absolute monster solo project he dropped with this one. So many great songs on it- "Gone Til November",  The Kenny Rogers track, and of course "We Tryin To Stay Alive".

These are the songs there's just no way the former President knows exist, has ever listened to in his life, or both.

Lil Yachty? Give me a break.

Now this list is just all over the place.

This song blew up because of that show Lucifer. I highly doubt Obama watches that show. But I bet one of his interns sure does.

Don't get me wrong, awesome song. But nobody's listened to it in 20 years.

Perhaps the sneakiest, "too cool for school" pick on this list. The safest play ever going with Harry Styles' new stuff. BUT- not picking one of the ten singles he currently has out on radio right now and opting for one of the "deep cuts" off the album is as try hard as it comes.