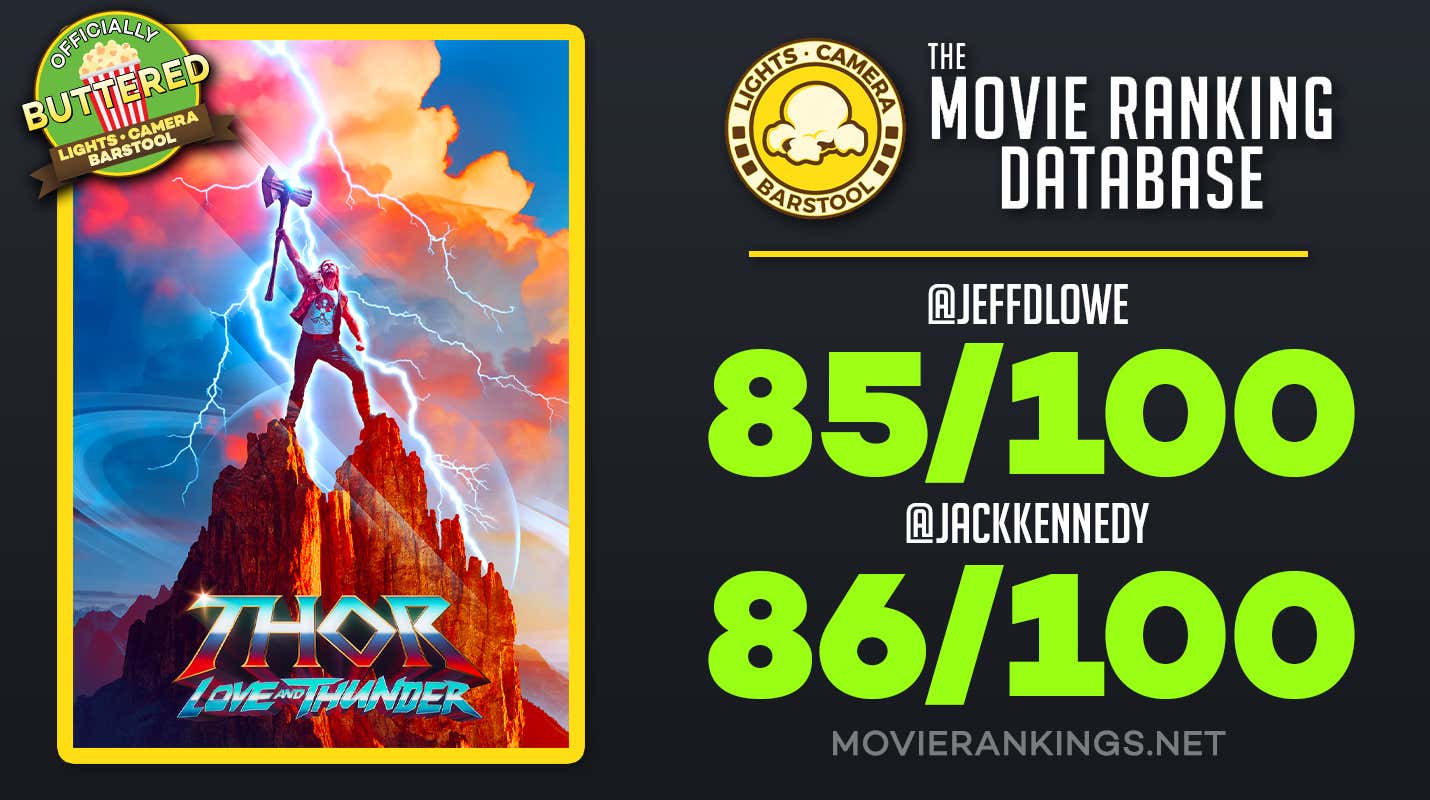 After his retirement is interrupted by Gorr the God Butcher, a galactic killer who seeks the extinction of the gods, Thor enlists the help of King Valkyrie, Korg, and ex-girlfriend Jane Foster, who now inexplicably wields Mjolnir as the Mighty Thor. Together they embark upon a harrowing cosmic adventure to uncover the mystery of the God Butcher’s vengeance and stop him before it’s too late. (via MovieRankings.net)

JeffDLowe (85/100): 'Thor: Love and Thunder' is a high-energy, engaging blast that will leave a memorable mark on the Marvel Cinematic Universe. The fourth Thor release is a straight-up awesome RomCom and a unique edition to a comic book movie landscape that is in need of fresh ideas. It is really funny, is packed with fantastic music, and all of the characters worked perfectly together on screen. Christian Bale's villain Gorr is creepy and at times terrifying, and doesn't fall victim to the same cliched problems and tropes that bad Marvel villains sometimes suffer from.

But… and I can't believe I am saying this for back-to-back Marvel movies… this movie is way too fucking short.

The pacing and length are definitely there to play into the craziness that is the script and story, but we needed just a little more time with some of the characters, specifically Christian Bale's Gorr, and Natalie Portman's Jane Foster. What we get from those characters is fantastic, but when the credits roll, you almost feel a bit cheated out of basking in what could've been great characters.

More time to breathe would've done this movie wonders, and I'd even argue that it could've reached a "great" tier in terms of the Marvel Cinematic Universe. One of the problems I had with 'Thor: Ragnarok' was how much time they spent in Asgard, and not in the more fun and wacky environment was Sakaar. With 'Thor: Love and Thunder', they didn't really waste any time in places (both physically, and storytelling-wise) that slowed down the fun energy. But where it fails to reach the level of 'Ragnarok' is in the idea that we just didn't quite get enough time in those spots.

The drawback being the fact the movie feels rushed is a bummer, but, as I've mentioned, the good stuff in this movie is truly great. From the inclusion of the Guardians of the Galaxy, to Gorr, and the return of Jane Foster. What Taika Waititi has done with the character of Thor, and this franchise, is remarkable. I truly don't like the original Thor movies, but now this franchise might be the best the MCU has to offer, outside of The Avengers, of course (which sort of doesn't count).

While the movie might not hit that "great" tier like its predecessor did, 'Thor: Love and Thunder' is still going to live up to much of the hype most people have had for it since the title was announced a few years ago.

KenJac (86/100): This movie is frustrating to me in that it felt like it could easily top-5 MCU movie if it didn’t shoot itself in the foot in a few areas. It is the funniest movie in the MCU and has one of the best soundtracks and uses of tertiary characters. It is also rushed, has a little bit of a confusing tone, and woefully underused what could have been the best villain in the whole MCU. It is a very entertaining movie no matter its flaws, though, and that is what comic book movies are all about in the end.

As I mentioned, there is a TON to love about this movie and it really starts with the humor. I think I laughed out loud more during this movie than any movie in recent memory. It’s universal humor too, not stuff you need to be plugged into the MCU to get. Waititi and Hemsworth have turned the character of Thor from a gloomy bitch that was arguably the least entertaining Avenger into the funniest and maybe best Avenger. The Guns N’ Roses soundtrack ROCKS and is used perfectly throughout key moments in the movie. And Bale? Man, he rocked. Really god damn creepy and he ate up every minute of screen time he got.

The problems in this movie start with the rushed feel to it. I love any movie clocking in at under 2 hours but not at the expense of its pacing. In addition to that, I think this movie was planned to be a sort of dramedy but ended up messing up the ratio of drama: to comedy. This is basically a pure comedy movie with some sorta out-of-place dramatic moments peppered throughout it. I think a fixed ratio or maybe a full dedication to humor would have been great. Lastly, this movie really needed more of Christian Bale. He got about as much screentime as characters like Valkyrie and Korg which is a HUGE shame. However, as I said before, he ate up every second he had.

This movie just frustrates me because it feels like so much potential was left on the table. It’s by no means a bad movie at all, but it is for sure a very good movie that could have been great with a few tweaks. I just hope that we get to see a longer cut of the movie at some point in the future.

--
The movie is Officially Buttered, and, always with Marvel, I have no clue what people are going to think about this movie. You can head to Lights Camera Barstool right here to listen to our latest episode where we will discuss it on our new episode.