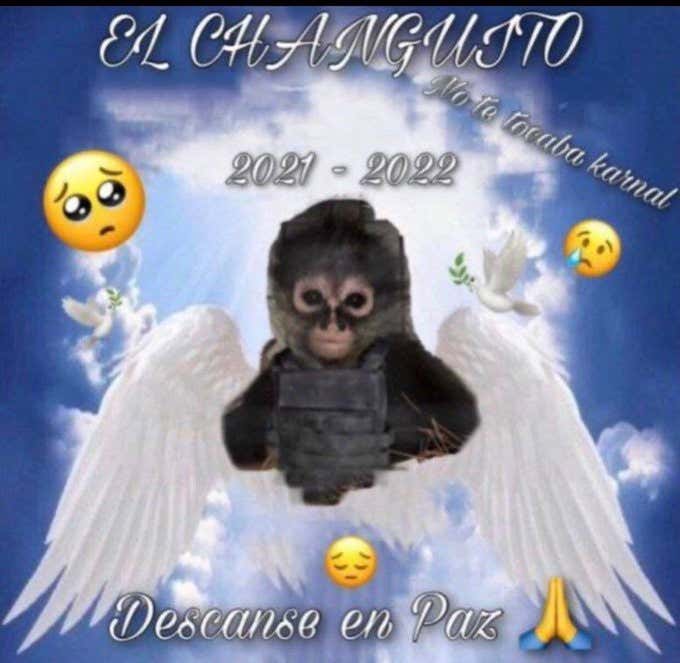 Harambe. Cecil the Lion. Now El Chango. There's something profound in the death of a world-famous animal. Something that touches the core of the human soul. That speaks to our very being.

El Chango, as you may know, was the beloved companion of the drug cartel La Familia Michoacana, who was killed along with other members of the organization in a firefight with the authorities in Texcaltitlán, Mexico last week. His little, lifeless body found among the others, clad in an adorable monkey bullet proof tactical vest. And news of his untimely demise has saddened hearts throughout the world.

But as is often the case, that tragedy has been turned into great art.

Source - A raspy voice paired with the gentle strums of a guitar narrate the pain of a life cut short. Like other narcocorridos — a genre of folk songs glorifying drug kingpins — the lyrics touch on a violent end: “There’s witnesses to how he was executed,” the ballad proclaims.

But unlike other narcocorridos, this one is a testament to the death of a tactical-vest-wearing spider monkey in a custom camo jacket.

The monkey [was] referred to online as “El Chango,” or “the primate” in Spanish, and also known as the Sicario monkey. …

After last week’s shooting rampage — which left 11 dead, three injured and seven arrested by police — photos of the bloody scene began circulating online. In a country mired in a deepening crisis of violence that has displaced thousands, images of bodies peppered by bullets and scores of military-grade weapons seized by authorities are nothing new. Yet one provoked a social media frenzy: the monkey’s body, clad with his tiny vest, lying on top of a dead man’s chest in an apparent hug.

For some, it was the contrast of a cute monkey decked in narco attire. For others, it was outrage that an endangered species was being kept as a pet. But mostly, it was the sense that an innocent being had been killed in crossfire that prompted myriad tributes, newspaper front pages and even a song. …

“It’s such a short life and it wasn’t the monkey’s turn to die,” say the lyrics of the composition shared widely on Twitter. “Someone stole his story because he came here to triumph and shine in so many things.”

The little guy, the song laments, is “on his way to heaven, but he left us a legacy.”

I think we can all agree that El Chango's life was cut short far, far too early. And that is a tragedy. But as they say, every ape dies; how many can say they truly lived?

Sure, you may believe that he never should've been decked out in kevlar in the middle of an intense shootout. That he should've lived out his years in the rainforest, eating bugs out of the fur of his monkey friends, cavorting with his monkey mates, and throwing poop to scare off his monkey rivals. But who are any of us to say he would've been happier? He would've lived in obscurity. Never known the warmth of a brutal, merciless, drug kingpin's love. And died alone, losing a fight for territory or falling out of a tree or eaten by a predator. Remembered by no one. Instead of what he is today, mourned around the world and celebrated in song like a great hero of old. As the song goes, "On his way to heaven, but he left us a legacy."

In way, El Chango is the opposite of the Mighty Kong, of whom they said, "He was a king in the world he knew. But he comes to you now a captive." This legendary primate would've been a captive in his native world. But living among men, he was a king. Now deceased, but immortal nevertheless. Ladies and Gentlemen, I give you El Chango the 8th wonder of the world. May he rest in his little ape peace.