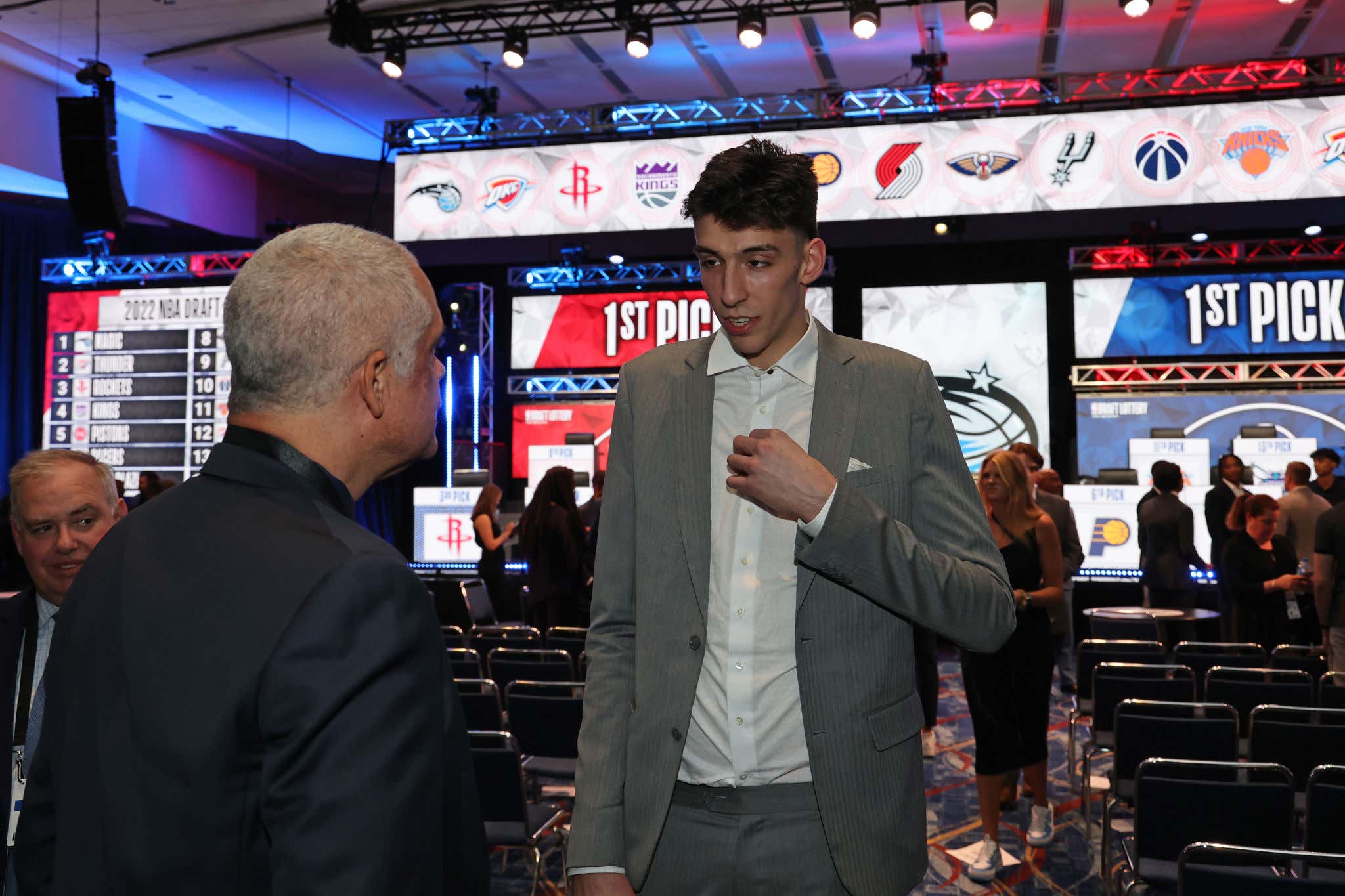 It's already the 2022 NBA Draft on Thursday, which hit me like a ton of bricks because I'm pretty sure the Finals just ended like two minutes ago. Whatever that's neither here nor there. The action at the Barclays Center in Brooklyn should be filled with suspense, at least for the start of the proceedings, as we find out which flailing franchises can change their fortunes by bringing in a transformational player.

Soon enough the Orlando Magic will go on the clock. I've got some draft prop plays for your consideration. Here are some of my good recent draft takes in case you're a little apprehensive: I labeled Luka Doncic, in these exact words, "The next big thing." Also nailed a 1-2-3 pick order parlay in 2020 of Anthony Edwards-James Wiseman-LaMelo Ball. Somehow called the Brooklyn Nets drafting Pepperdine product Kessler Edwards in the second round last year. Do what you will with that information.

All odds courtesy of Barstool Sportsbook

I'd personally take Chet first overall if I had the power in Orlando, but the Magic have no idea what the hell they're doing ever. As Reags reported on earlier this week, the odds were starting to go against Auburn's Jabari Smith as the No. 1 overall pick. That has since subsided, and when the odds are this short, it's basically a sure thing. Hard to see Smith not being Orlando's choice, despite the dubious state of their frontcourt.

It's too bad I didn't put this out sooner, because my initial prediction for Holmgren to OKC was at -149. Thunder GM Sam Presti is the ultimate galaxy brain guy, and I can't imagine all the advanced analytics he's agonized over to arrive at the conclusion that Chet is the man. With Shai Gilgeous-Alexander and Josh Giddey already in place, OKC has two playmakers to complement a potential perennial Defensive Player of the Year candidate in the wiry, 7-foot Holmgren. Again, I'd take him No. 1.

If I were the Rockets, I'd rather take Jaden Ivey instead of hitch my wagon to Kevin Porter Jr., yet it seems like all indications are Paolo Banchero will be the pick. Instead of extending Porter a year from now, Houston can have more cap flexibility and two legit perimeter studs to build around in Ivey and Green, as the former's ceiling is higher than Porter's anyway. Alas, don't think that'll happen.

In any event, I just love the Kings. They always do shit that makes no sense. Outsmarting themselves into a premature Tyrese Haliburton trade was the latest masterpiece. Sacramento already has some lead guards in De'Aaron Fox and Davion Mitchell. So what? Wouldn't put it past them to take Jaden Ivey.

How sick would a +1700 hit be though!?!? Such incredible value when all that theoretically has to happen is the prohibitive favorites to go 1-2 (Smith and Holmgren) fall that way, and Houston simply passes Banchero up. FYI: The Kings may trade out of No. 4, making the Ivey pick more sensible for someone else.

Finally, now that Jerami Grant has been traded to Portland, Iowa's Keegan Murray is the favorite to go to Detroit. That seems like the ideal move, unless the Pistons want more perimeter scoring firepower next to Cade Cunningham, which is entirely possible. Bennedict Mathurin (+140) is a distinct possibility, but the better hedge flier is Dyson Daniels at +1000.

I'm going to with two prospects apiece from a couple of college basketball's blue-blood powerhouses.

Shaedon Sharpe Under 7.5 (+147) — A couple examples of one-and-done players with small sample sizes who had no issue starring in the NBA are Kyrie Irving and Darius Garland. The difference with Sharpe is he didn't play at all at Kentucky, electing to sit out the season to prepare for the pros. Some may view that as a red flag. I think his talent is too much to pass up. Before I knew ESPN's Brian Windhorst reported Portland is interested in Sharpe at No. 7, that seemed like a logical fit. He can play the 2 or the 3 and step in instantly as a capable sidekick alongside Damian Lillard. This is the clear area the Trail Blazers should target in the draft lottery after trading for Grant. Yahoo Sports' Chris Haynes reported the Blazers could trade the seventh pick for Raptors wing OG Anunoby. I love how Sharpe would fit in Toronto as well. Nick Nurse could get the absolute most out of him.

AJ Griffin Under 11.5 (+114) — There's a little herky-jerkiness to Griffin's game that makes him difficult to contain. When he gears up to hoist that long jumper with unorthodox form, Griffin can suddenly beat you off the dribble, and either make the proper pass off it or finish closer to the rim. He can score from anywhere on the floor, has a high basketball IQ and has a 7-foot wingspan to give him immense defensive upside and versatility. You're telling me he might almost slip out of the lottery? I doubt it. Spurs at 9, Wizards at 10 or Knicks at 11 all seem like fine fits for Griffin.

Mark Williams Under 13.5 (+150) — I initially wanted Nikola Jovic Over 20.5 here at -114, but in less than two days, his line went up to Over 22.5 at -167. So instead, we're going with the Duke center. Williams has a bonkers 7-foot-7 wingspan, and would've likely emerged as more of an offensive force if Banchero wasn't such a high-usage guy and the Blue Devils weren't so stacked with scoring talent. I love the idea of Williams going to the Hornets at 13th overall to be an elite rim protector for them who can still run the floor with LaMelo Ball and Co. and be a high-efficiency paint scorer. Oh, and Williams is a hell of a passer, too.

TyTy Washington Jr. Over 19.5 (-124) — This got juiced up a little bit from -114 the other day. I like Washington's floor as a prospect, but his lack of dynamic inside-out scoring ability and middling-by-NBA-standards athleticism make me think he'll be an energy/second unit guy. Although he can work off the ball, I think he's better suited as a pass-first floor general, which is sort of a dying breed in the modern NBA.

International players selected in Round 1 (OU 2.5) — I mentioned Jovic…I think he hears his name called in the top 30 picks. New Zealand's Ousmane Dieng could go in the lottery. I'd be stunned if he fell to the second round. Beyond those two, I have a hard time seeing anyone get the nod, so let's go Under at +115.

Number of Kansas players drafted in Round 1 (OU 1.5) — Not sure it'll be a popular pick, but the reigning national champions should produce at least two first-rounders in Ochai Agbaji and Christian Braun. You get +105 odds for playing the Over. Might as well.