I've been saying it for the last two weeks but we're getting away from MLB for a minute on Starting 9 as we got ready for Omaha and the CWS tournament. Needless to say there's plenty of action to go around and hopefully you didn't interpret that as abandonoment. By no means do I see this as me and Jake turning our chiseled diesel backs on you. Quite the opposite. Distance makes the heart grow fonder.

But not too much distance. We're still ripping Hot Ice every Tuesday and Thursday with Rico & Big Ev. We're still launching a number of baseball props each week including the Hit Parade and now the Launching Pad, or some derivative. This is a great time to be alive as a baseball fan in the barstool universe. We got Mintzy in Omaha with Castellani and Kayce. We got the LGM boys fired up talking crazy shit. Tommy Smokes is on a heater. WSD is about to get hot just because you can feel the momentum. There's countless examples of where the baseball gods are being good to Barstool Sports so let's be good right back to them with a Round Up blog. Like doing squats after a brief hiatus, this might offer you a deep burn.

Embrace the burn - my co-host

Let's get to the standings. 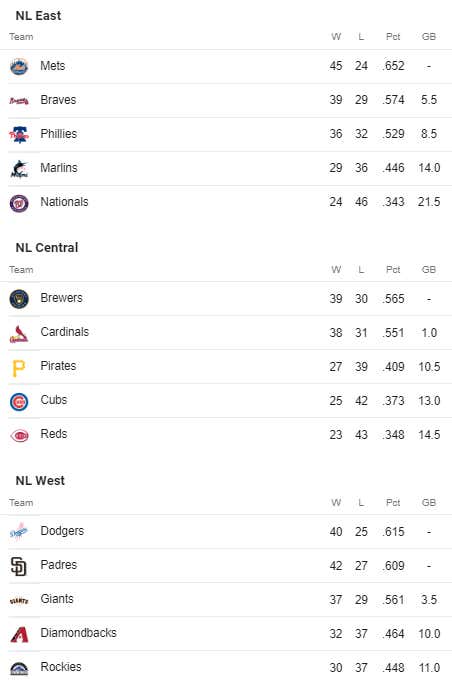 Two out of three divisions in a tight race with the East starting to narrow is so much more than I could have asked for a few weeks ago. It's still the same names, just a lot closer across the board. On that front you could comfortably say the Dodgers creampuff schedule was a real thing. The Brewers are good even if weakened. The Padres just lost their best player but no IL stint anticipated. The Giants continue to play solid consistent baseball while the Braves are doing everything in their power to catch the NL leading Mets - a club that's won 16, lost 2 and drew 3 of their 21 series this season. Pay the respect where it's due - they're still the team to beat with two 1st ballot HOF arms coming back. 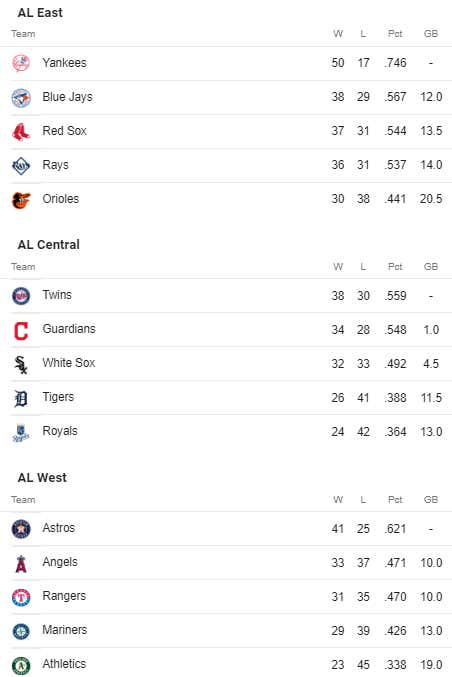 As good as the Mets have been, the Yankees are still significantly better. That division lead is downright laughable because the Blue Jays, Red Sox and Rays are all top-12 teams. The White Sox continue to linger behind an emerging Guardians and consistent Twins while the Astros are proving they made a deal with the devil. Just a preposterous command on a division everyone is waiting to see turn-over. Doesn't look like it's happening any time soon though.

Next time we'll talk Wild Card. For now let's get to some juicy headlines:

The Pirates finally brought Oneil Cruz, their #3 prospect according to MLB and he was flat out electric. Highest exit velocity of the year for any Pirate which is such a lame thing for me to reference but it's true. He also throws 100mph from SS like a 22 year-old Javy Baez and he's about the size of Magic Johnson circa 1987. Everything about Oneil Cruz is amazing and it makes you wonder just how disgusting the Pirates ownership group is for manipulating this kinda player's service time. If he finishes top-2 in MVP voting then it doesn't matter. Obviously that would be good news. t

For more on this dude and why he's awesome:

I don't want to be dramatic but why did it feel like the Yankees needed this from Cole? He gets shit on so much you have to imagine he's earning every single penny. And then to take a no no into the 8th in triple digit pitches. That's how you get some hair on the chest of your public opinion. And against a strong division competitor no less. That's dragging your balls on the mound.

The Chicago Cubs Are Doing The Complete Opposite

You know it's bad when Paul Sullivan shows up in a round up blog but he makes a good point. 6.79 ERA when it's June 21st is absolute hysterical. And if I remember correctly (I do) - it was this time last year that everything started to fall apart for the Cubs. So if anything, we're slightly ahead of schedule here on the North Side of Chicago. Isn't that lovely.

Manny Ramirez Is Also Getting Lit Up, Except For A Bad Quote:

That's out of context plain and simple. Manny's point was that New York and Boston fans make their players better because they expect more from them. He wasn't saying shit about Jeter being a bad player or anything. It's just classic trash reporting that's going to fly around the internet for the next 12 hours. Meanwhile I'm out here grinding on a Sprinter Van covering the 10u Omaha championships. But the Sporing News guys get a Cooperstown vote? Color me shocked.

Whatever. Baseball peaked when Manny was on the Red Sox doing battle in the early 2000's against Jeter. Maybe the best run of any pro league of my life that doesn't involve MJ throating a bunch of 1st ball HOF's.

Instead Let's Talk About This Jeter:

I know my audience. I know you guys are diehard Red Sox fans. I'll throw you a bone. This dude is supposed to be legit despite a brutal batting average. Old School Carl says that he's not ready. New School me is willing to listen to the reports: solid base runner with a hose for an arm up the middle infield. One of the better all around prospects in the Red Sox org and a guy that should fit well in the clubhouse. A part of the Mookie Betts deal, he's probably going to be yet another awesome cost controlled infielder for the Red Sox that gets extended long-term below market value because that's what the Red Sox do.

Joc Gets The Love He Deserves

Just a reminder that Starting 9 is very much a PRO Joc Pederson show.

The Braves Can't Lose (Unless They're Playing The Cubs) 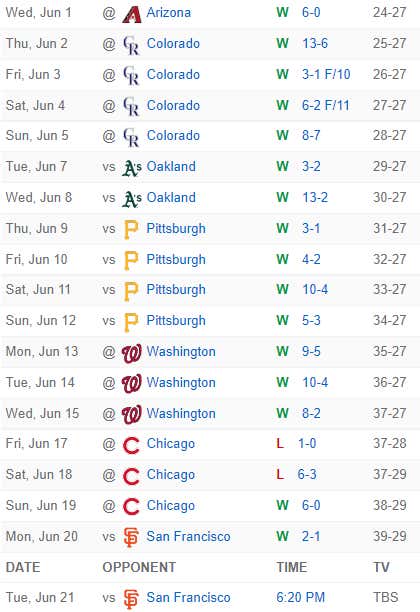 I'd say pretty good. Turns out the World Champs are very hot and finally breaking out of the World Series hangover that plagues so many teams. Definitely a big storyline to track going into the end of the 1st half. They've got 9 quality games in a row with the Giants-Dodgers-Phillies then a 3-bagger with the Mets starting July 11th. Of all the division races, this one has the most juice to me right now.

We'll get into the details on Starting 9 this week. You can check out the famous Sprinter Van episode here. It's fresh off the press and loaded with good life stuff: