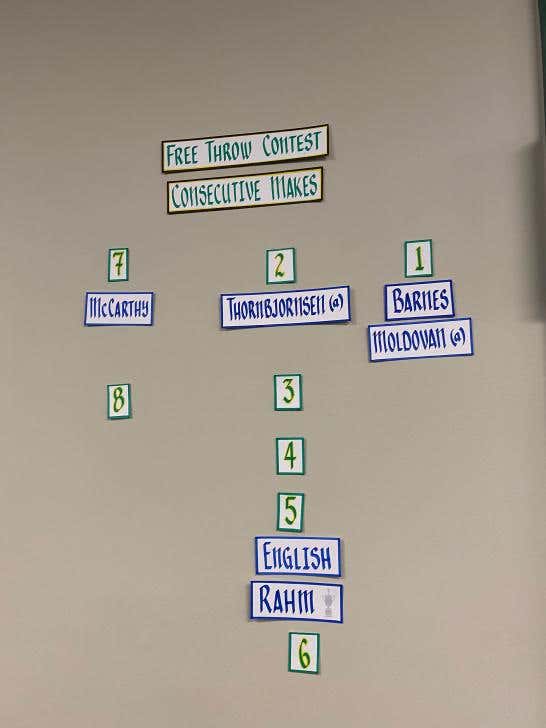 Golf Digest via Dan Rapaport - …. With Matt off shaking hands and smiling, USGA staff began setting up for the party in a player lounge. Light hors d’oeuvres, full bar. Foster got his hands on a bottle of Dom Perignon but declined to spray it locker-room style. “It’s about $300 a bottle!” On the back wall was one of those basketball hoops you hang on a door, accompanied by a scoreboard for the week-long free-throw contest. Denny McCarthy, a putting savant who finished tied for seventh, led the way with seven consecutive makes. What can you say—the man has a silky touch. Harris English and Jon Rahm tied for second with five. In the middle of the room were four massive tables pushed together; on top of them were things for Matthew to sign. So, so many things. Flags. Banners. Tickets. Credentials. Name plates. Ping-pong paddles. Coffee mugs. A Celtics jersey. Copies of The Greatest Game Ever Played.

Well this is just awesome. Golf Digest writer (and friend of Fore Play) Dan Rapaport wrote a terrific story capturing the Fitzpatrick family's night after winning the US Open. Rapaport went to Northwestern with Fitzy and is good friends with him, so he was positioned well to write a really intimate and fascinating piece, which I encourage you to read in full here:

You probably won't be surprised (given my colleague Reags' blog earlier this morning) that Matt's celebration himself was remarkably tame. Guy is just a golf nerd who just wanted to chill after a grueling week of golf's toughest test and leave the raging to the rest of his team. But buried in the story is a fun little detail behind the scenes of the US Open locker room.

The boys love to hoop.

Nothing gets people going like a toy basketball hoop. That's why it's a staple in cubicles and dorm rooms across the country. Need a reprieve to pass the time? Throw a hoop up and that's an instant morale boost.

Better yet, the boys put together a little contest. Consecutive free throws made gets your name up on the board. I don't know if these guys got one crack at it for the entire week, one crack at it a day or what, but that's just some good clean family fun, eh Cotton?

The only thing I'm disappointed in is the results. 7 straight is the winner? Only a couple more with 5? That's it? Good thing these guys get paid to play golf. Stick with that, fellas. And shoutout to Denny McCarthy for putting on for the state of Maryland. Great week on the golf course, better week in the locker room for Denny.