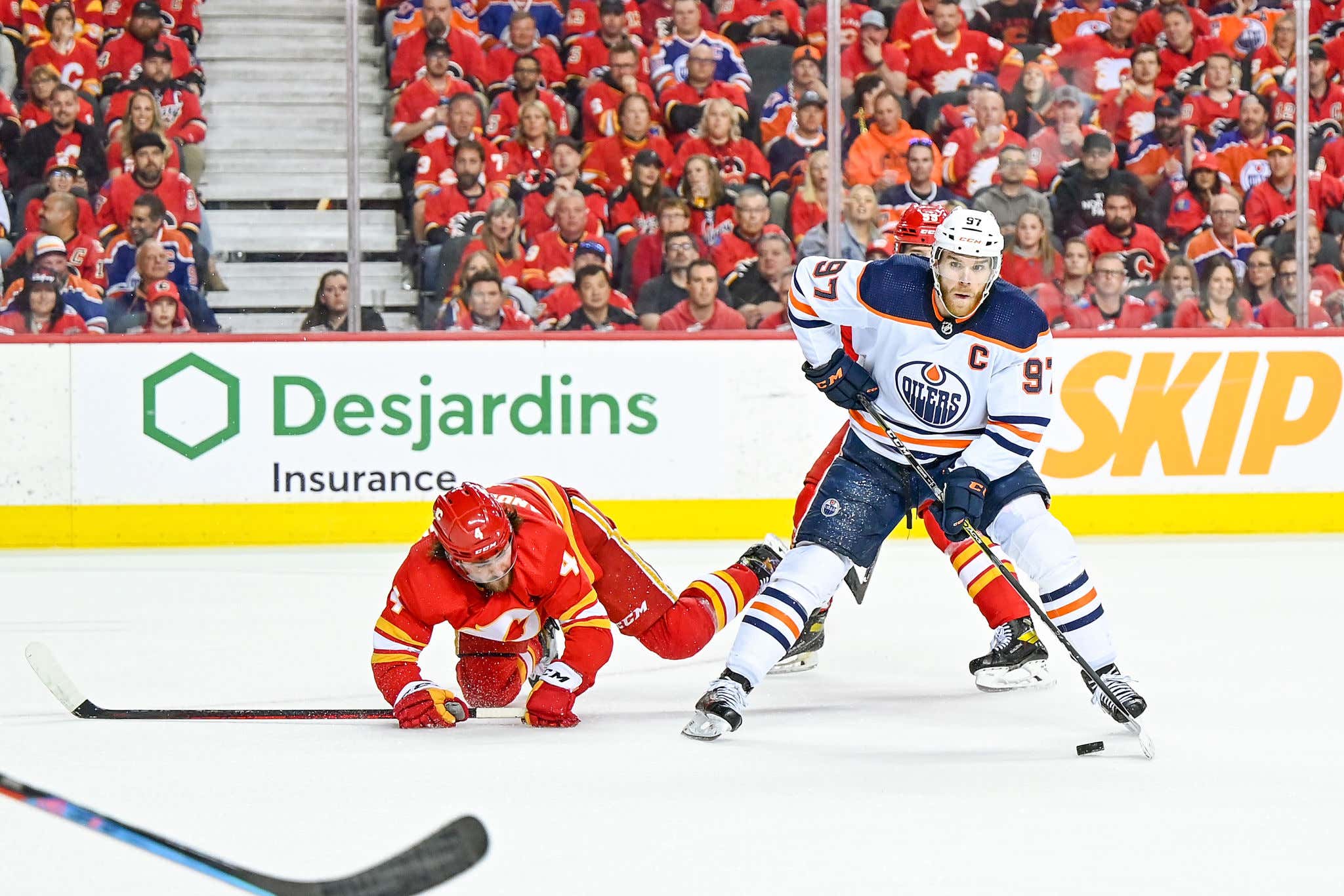 CONNOR MCDAVID STRIKES AGAIN. Now seven goals to go with 19 assists in the playoffs, and NO score in his life has been bigger than this one. This is like that iconic Tiger Woods U.S. Open call from Dan Hicks: "EXPECT ANYTHING DIFFERENT!?"

What a classic way to end the Battle of Alberta. A 5-4 triumph in overtime as McDavid sends the Oilers to the NHL's Frozen Four for the first time in his career. It looks like we're gonna get Edmonton against the Avalanche in the Western Conference Finals if Colorado can finish off a 3-2 lead vs. the Blues.

This Flames-Oilers rivalry lived up to the hype and then some. They set a Stanley Cup playoff record in Thursday's Game 5 with four goals in 71 seconds. Batshit crazy. Considering Calgary won the opening face-off 9-6, the outburst of offense wasn't necessarily a total shock.

What is surprising is that the Flames proceeded to lose the next four after taking Game 1. And to be honest, they have every right to direct some anger at the officials who disallowed Blake Coleman's late third-period goal that could've helped Calgary stave off elimination. Here is the grisly footage Flames fans and players will be playing on loop in their heads all offseason:

Biz was not pleased and vehemently disagreed:

I mean…it's a cruel twist of fate for Calgary, yet it DID set up an absolutely iconic finish from McDavid. This guy has done little else but suffer, with his early-career greatness squandered in Edmonton as bad defense and lack of depth have let him down on too many occasions. For the exposure of the NHL in general, and the sheer entertainment value, it's great for hockey that McDavid is this deep in the postseason for the first time.

If Edmonton can advance to the grand finale and compete in a best-of-seven for Lord Stanley's Cup, it could be a duel with the two-time reigning champion Lightning, or with the winner of the Rangers-Hurricanes series. Tampa would be my preference for historical purposes, but it's just amazing that McDavid and the Oilers found a way to get it done this year. Even getting past the Avs in the Conference Finals would be a staggering achievement.

Celebrate tonight, Oilers! You deserve it. And PS, for all the epic brilliance McDavid has displayed in these playoffs, let's not forget his top running mate, Leon Draisaitl, who set up McDavid's winner with his FOURTH ASSIST of the night.