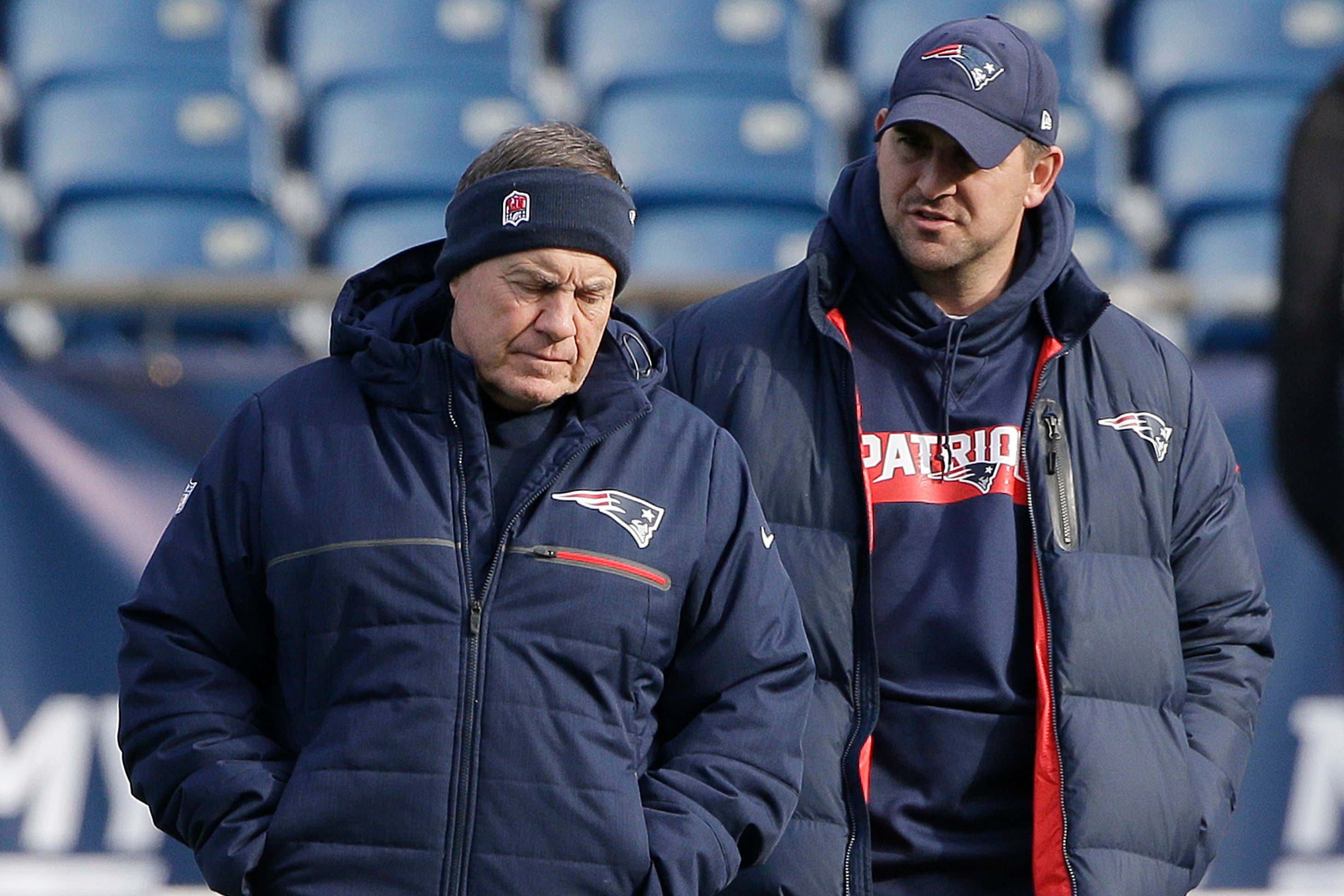 It's not uncommon for a single issue to dominate the Patriots offseason narrative for months at a time. During the Pliability Wars, it was the "rift" between Bill Belichick and Tom Brady. Prior to that we had the best championship of the Dynasty Era (in my opinion) practically eclipsed by an alleged couple of psi of air in a dozen footballs. Occasionally we had a high profile contract dispute, including, though not limited to, Vince Wilfork's, Logan Mankin's, Wes Welker's and Ty Law's. But rarely if ever has one overarching theme driven the conversation the way the question of who'll be calling the Patriots offensive plays has this spring. I've written about the obsession over whose voice will be in Mac Jones' helmet a couple of times already this month:

The subject was the main reason why today FMIA's NFL power ranking lists the Patriots at No. 17:

It’s crucial for Mac Jones to be better in year two if New England has a prayer to catch Buffalo and to stay above Miami in the East. But will he be better? Jones was a 69-percent passer while starting his NFL career 9-4; he was a 61-percent passer in finishing the season 1-4. And now he’s lost his mentor and offensive coordinator Josh McDaniels in favor of either Joe Judge, Matt Patricia or some combination of them. I’d check Wikipedia. In 39 years of college and NFL coaching combined, neither Judge nor Patricia has ever had quarterback coaching as part of their job description. That seems problematic for a quarterback who needs to get better.

Dan Orlovsky, who spent last year being one of the most supportive voices for the Pats in general and Mac Jones in particular was in full panic mode on Get Up this morning, saying that for two months he's been calling this "the most concerning thing in the NFL":

Which will come as welcome news to a Browns team that has a quarterback making $230 million guaranteed who is in very serious trouble of getting suspended. But whatever. Agree to disagree.

There's at least one report about how Patriots players themselves are "alarmed" by the situation:

"The Home of Patriots Monday" where I used to work is also alarmed by how alarming all of this is. And knows exactly where to place the blame for the alarms going off:

There is no doubt that the Patriots’ current plan on offense is curious at best and downright alarming or even offensive at worst.
It flies in the face of football norms and the type of expert specialization that’s not only prevalent in modern coaching, but the world as a whole. …

[I]f anyone has a problem with the current Patriots coaching staff on offense or the work that group does with Judge working with the Jones and the quarterbacks while Patricia is focused on the offensive line, that criticism should be directed toward only one person – Belichick.

Well the man himself spoke to reporters today. And when he wasn't hyping the Celtics ahead of Game 4 against Miami, he was addressing the concerningocity and the alarmishness of the chaos he's created since Josh McDaniels left. And to the surprise of no sentient human being who's been paying attention over the last two decades, he's less "concerned" and "alarmed" than he was totally dismissive, brilliantly condescending, and dripping with perfect sarcasm about the current arrangement of his coaching staff.

“Now, if you’re asking about game plans, we’re months away from that. Months.

“What plays are we calling? Minicamp plays? We’re going to coach the team, coach the players, get them ready to go. We’re going to game plan when we have to game plan, [make] play calls, do all the things we need to do to compete in games. Right now, we’re months away from that.

If these aren't the words of a concerned alarmist in the throes of panic, I don't know what is.  (Far be it for me to try to match the sarcasm level of a true master of the artform. But his pure sardonic attitude is the only logical approach at this point.)

Let's agree that the situation is unusual. I totally grant you that. No other franchise refuses to name a coordinator on either side of the ball. And for the public to not know who'll be holding the laminated sheet over his mouth and talking while the offense is huddling up is unheard of. But you either trust that there is a plan in place or you don't. You either believe that there's a carefully outlined process that will play out over the next three months or you think the coaching staff doesn't know what it's doing. You either take it on faith that Belichick is thoroughly prepared for this scenario or you think that, after years of McDaniels getting job interviews and turning down offers, his boss got blindsided by his sudden departure and had no plan of succession.

In short, you either side with the guy who has been putting together football staff organizational flow charts since he was breaking down game for the Army-Navy game at his father's knee, (which is the same age the rest of us were learning to put LEGOs together), or you side with the people who talk like he doesn't know what he's doing. That he's pulling this all out of his ass like a kid having to do an oral report on a book he didn't read.

Look at it in those terms, and the alarmed concern is ridiculous. McDaniels wasn't suddenly dragged out of his office by the ankles screaming by some Eastern European goons like Liam Neeson's daughter in Taken. His inevitable departure has been a part of conversation inside the building for years. So go ahead and try to convince me that a head coach who uses of arcane sections of the rulebook to his advantage and obsesses over trivialities like how long the roof will stay open after kickoff:

… suddenly got taken by surprise when his closest assistant finally left after 10 seasons of opportunities.

So what we're dealing with is a widespread frustration that a guy who has been wildly successful while going against the conventional wisdom, is now going against the conventional wisdom. And because the public is confused, everyone in the Pats organization must therefore also be confused. And while we're all running around freaking out about it, he's masterminding his operation the way he always has. And inventing new fucks, just so he has more of them not to give about what everyone thinks.

Put your faith in the critics if you must. My belief that everything is going exactly according to plan remains unshaken. Kendrick Bourne agrees: