Last night, Tim Anderson did what Tim Anderson does best - he stepped the fuck up and put game 2 of yesterday's twin bill to bed:

That's what you greasy gabagools get for shit talking him the last few days. Every time you do, he beats you. Happened last year in the Field of Dreams game, happened this year after the Donaldson incident. Give TA any extra motivation to beat you, and he will. Because he's a killer. He has as much "fuck you" killer instinct in him as any athlete in Chicago has had in the 4 decades I've been around. Oh yeah, and he's the best SS in baseball right now, leading the league in these categories:

Please keep shit talking him. It brings out the best of him.

See you in October, goombas.

Speaking of October, the White Sox have work to do. If 100 unbiased baseball guys were polled, I'd say 90% or more of them would say the White Sox have been MLB's biggest disappointment thus far. They're barely above .500 in a trash bag division and have largely underperformed, especially on offense.

But but but... these guys are good hitters with good pedigrees. Take Jose Abreu for instance. Here's his current slash line:

Not great!!! Not great at all. It's so not great that a lot of White Sox fans are clamoring for him to be kicked to the bottom of the lineup and begging the White Sox to not resign him after this year.

Now, I'm not a slave to stats and analytics, but they're an extremely useful reference nonetheless. There are two ways to look at Jose Abreu's season thus far:

1. He's cooked. Can't/won't rebound. He's 35 now and his best years are behind him. "Thanks for the memories!" (Patrick Stump voice)
2. He's due for a ton of positive regression due to the following outliers in his numbers: 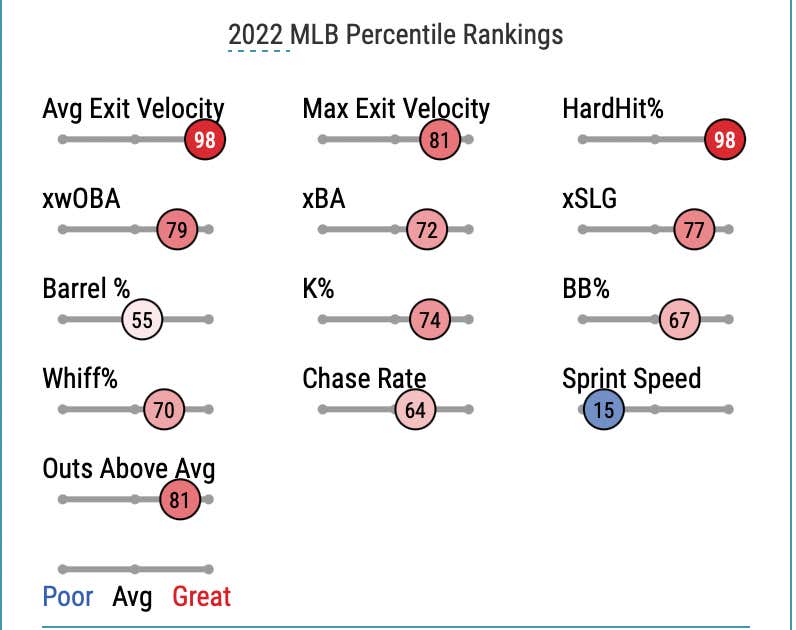 It's just that his line drive rate is down 5% YoY and his ground ball rate is up 5% YoY. That tells me it's a mechanical adjustment in his swing that he's struggling to make, and mechanical adjustments aren't always something age doesn't impedes to make. Should he find it?

That ain't a guarantee though. Like I said though, I'm not a slave to these numbers. A Jose Abreu offensive firestorm could be imminent. But he's still looked… bad… through May 22nd of 2022. Just beating the ball into the ground, albeit with high exit velocities. We all know Pito works his nutsack off though, so I'll continue to give him the benefit of the doubt for a while longer. He looked much better in NYC this weekend.

And everything I said about Pito goes for about 90% of the lineup too. WAY too many ground balls, and you can't hit ground balls out of the stadium. "Ball go far, team go far" as the kids say.

Sincerely though, you guys need to start hitting the ball out of the park like you did in 2020. Do that and you'll cruise to a division title. Not even joking.

The starting pitching is great though. Johnny Cueto, a player I assumed was actually cooked and just another prototypical White Sox scrap heap pick up, looks outstanding thus far, sitting 92-94 with that HEAVY fastball, excellent command of his entire pitch mix and savvy veteran craftiness. It's just what they need from their 5th starter. That ain't Keuchel and it ain't Velasquez. It's Johnny Cueto.

Oh yeah, and then you add Lance Lynn to that same rotation in 2-3 weeks. Gio-Lynn-Cease-Kopech-Cueto ain't too shabby.

They've treaded water just fine. They were annoying, frustrating and often times infuriating as they were treading water, but they're right there, and now, it's go time. The White Sox had a middle of the pack strength of schedule thus far. The Twins? Not as much, at least according to this MLB strength of schedule algorithm.

But now it flips. The White Sox have the easiest schedule in baseball through the remainder of the season. Twins much more difficult. Let's enjoy the off day then pummel Boston again for 3 games while getting healthy and starting to win games in bunches.

Great weekend of baseball. For the first time in a long time, I'm excited. Let's ride