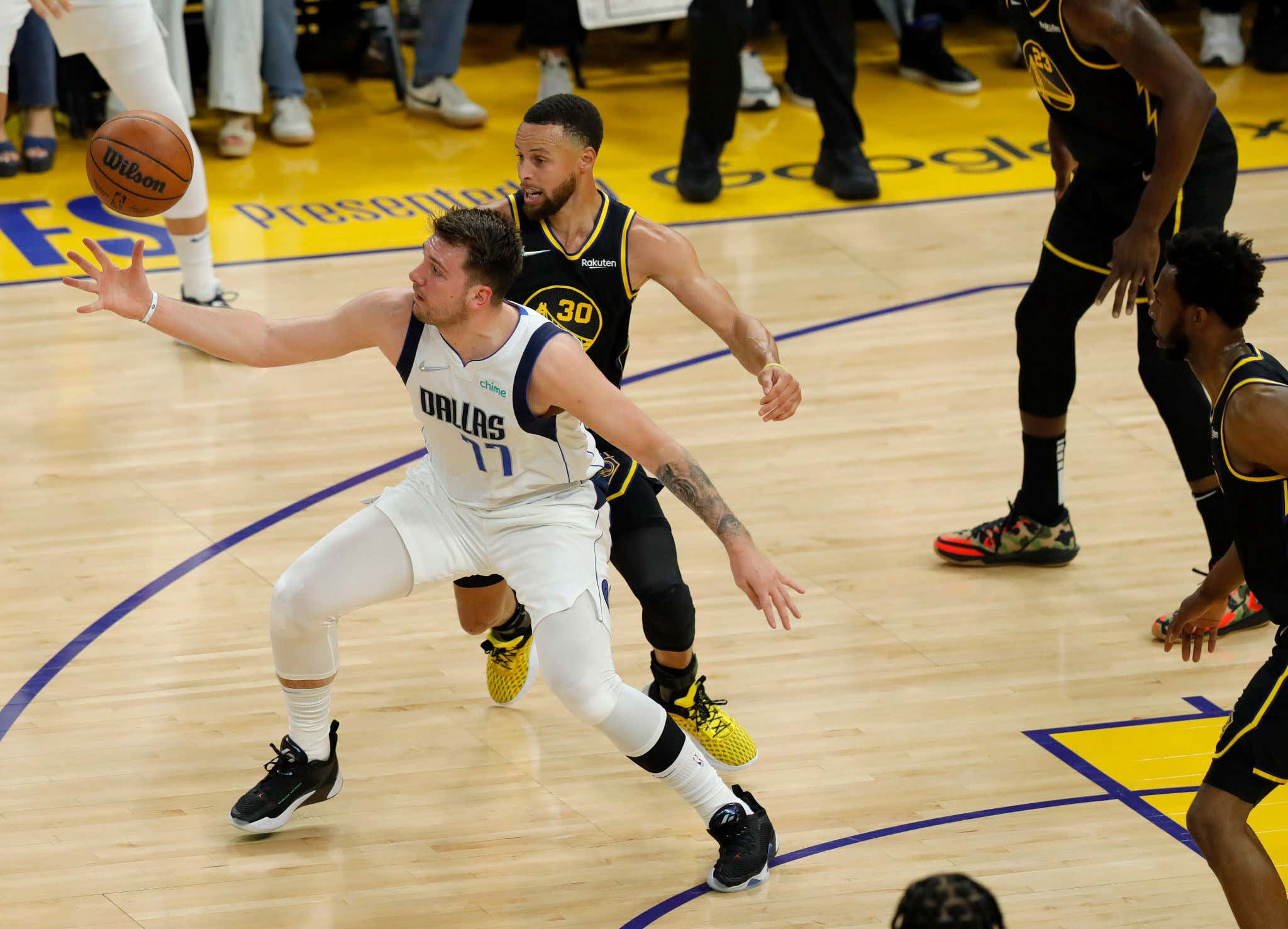 I will die on the hill that StatMuse has the creepiest fucking still sketches depicting athletes mankind has ever seen. But damn if they don't kill it with their convenient, relevant data tweets.

That whole "The NBA is a make-or-miss league" cliche couldn't have been more apt for Game 1 of this year's Western Conference Finals. Not to take anything away from the Warriors' defensive tactics and overall spectacular game plan that led to a 112-87 blowout, but they essentially challenged Dallas' dudes not named Luka Doncic to beat them. They couldn't come close to doing it.

So what is it? Will the Mavericks continue to choke as Golden State's championship DNA shines through on the big stage? Or will the Mavs (+195) bounce back, as they have all postseason long? Let's explore further before Friday's Game 2 tips off, shall we?

We've discussed the obvious point of improvement for the underdogs. Living and dying by the 3-pointer to the extent Dallas has is going to come back to bite you at some point, particularly at this late phase of the playoffs. So we're assuming they'll shoot better tonight. You almost can't do worse than Game 1.

Perhaps even more important to their upset bid? The Mavs need to pick their poison on the defensive end. As opposed to, you know, letting EVERYONE eat. Golden State had seven players score in double figures in Wednesday's rout. That's not going to get it done. Throughout their playoff run, I've seen Dallas seemingly forget how to play defense at all, only to rebound with a dominant performance the next time out.

Luka under the weather?

NBA on TNT play-by-play announcer Kevin Harlan suggested that Luka Doncic (OU 31.5 points) was playing through a non-COVID illness in Game 1. Perhaps that explained, at least in part, Luka's 6-for-18 shooting performance with seven turnovers. Not sure I fully buy it. I don't know what to think. All I know is it was an ugly Conference Finals debut for the 23-year-old superstar, but that he's apparently ready to roll.

Whatever the case may have been in the series' maiden matchup, I'm inclined to believe Luka is in for a big bounce-back effort. In four regular-season encounters with the Warriors, he averaged 31.5 points shooting splits of 47.6/38.2/87.5. Half the time he looks like he's limping down the court or dealing with some sort of physical ailment. Dude smokes hookah in the offseason and we all know he came into the season out of shape. Doesn't seem to matter much. He can just stone-cold ball on any given day, more often than not — especially when his back is against the wall.

I'm not ready to crown Jordan Poole a Splash Brother just yet, but Stephen Curry and Klay Thompson are the two best shooters in NBA history, full stop. Curry has actually sacrificed some of his efficiency on the offensive end to play exceptional defense. When he's the primary defender, playoff opponents are shooting just 39.3% against Curry on 117 shot attempts. He only shot 41.8% against Memphis and was 7-for-6 in Game 1.

Poole nailed eight of his 12 shots from the field in Wednesday's victory, yet he'd had three woeful outings before that. The only really consistent shooter has been Klay. He's shot 50% or better in five of his last six starts. So even with Poole and Curry not quite on their best form, the Warriors have still reached this deep juncture of the postseason with relative ease and are three wins away from an NBA Finals berth.

No offense to Dallas' Jalen Brunson or Spencer Dinwiddie, but that's an intimidating trio to try to match up with. To think that Luka can offset that significant overall advantage is naive. Curry is due to go on one of his classic flamethrower exhibitions, and Game 2 may be when he unleashes his full wrath on the Mavs.

Bet against the Dubs (-6) if you like. I just know that they have three championships and seldom disappoint their own fans. Not only do they have the NBA's best average home point differential (+10.8), but they've gone 7-0 SU in the playoffs, winning those contests by 16 points per game.

Dallas is only 10-19 as an away underdog and loses by an average of 5.9 points. I don't think it's wise to count out Luka the prideful Mavs given how well they tend to recover from losses. Still, the atmosphere at Chase Center, Dallas' relative inexperience, and the Warriors' depth and superior overall star power give them so many advantages.

Also worthy of consideration: The Mavs' defensive rating is an NBA playoff-best 102.4 at home compared to 117.1 on the road. Given that fact and the assumption Dallas will shoot better tonight, the Over 214.5 total points line (-112) seems a sensible play, provided the Warriors are able to impose their will and push the pace against the plodding visitors.

I could see this being one of those that's close through the first three quarters, with Luka carrying the scoring load for Dallas and the supporting cast stepping up with some timely shots. Then? Luka gets gassed down the stretch, Curry hits some clutch treys and the crowd swings the momentum even more to help Golden State pull away. I know, the Mavs +6 seems like a great play given Luka's history. I'll be happy to be proven wrong.

Regarding Brunson's prop, he's had at least four assists in his past five games against the Warriors. Getting him at plus money to reach that total again seems reasonable, especially since he managed four dimes in Game 1 despite how poorly the Mavs were shooting.