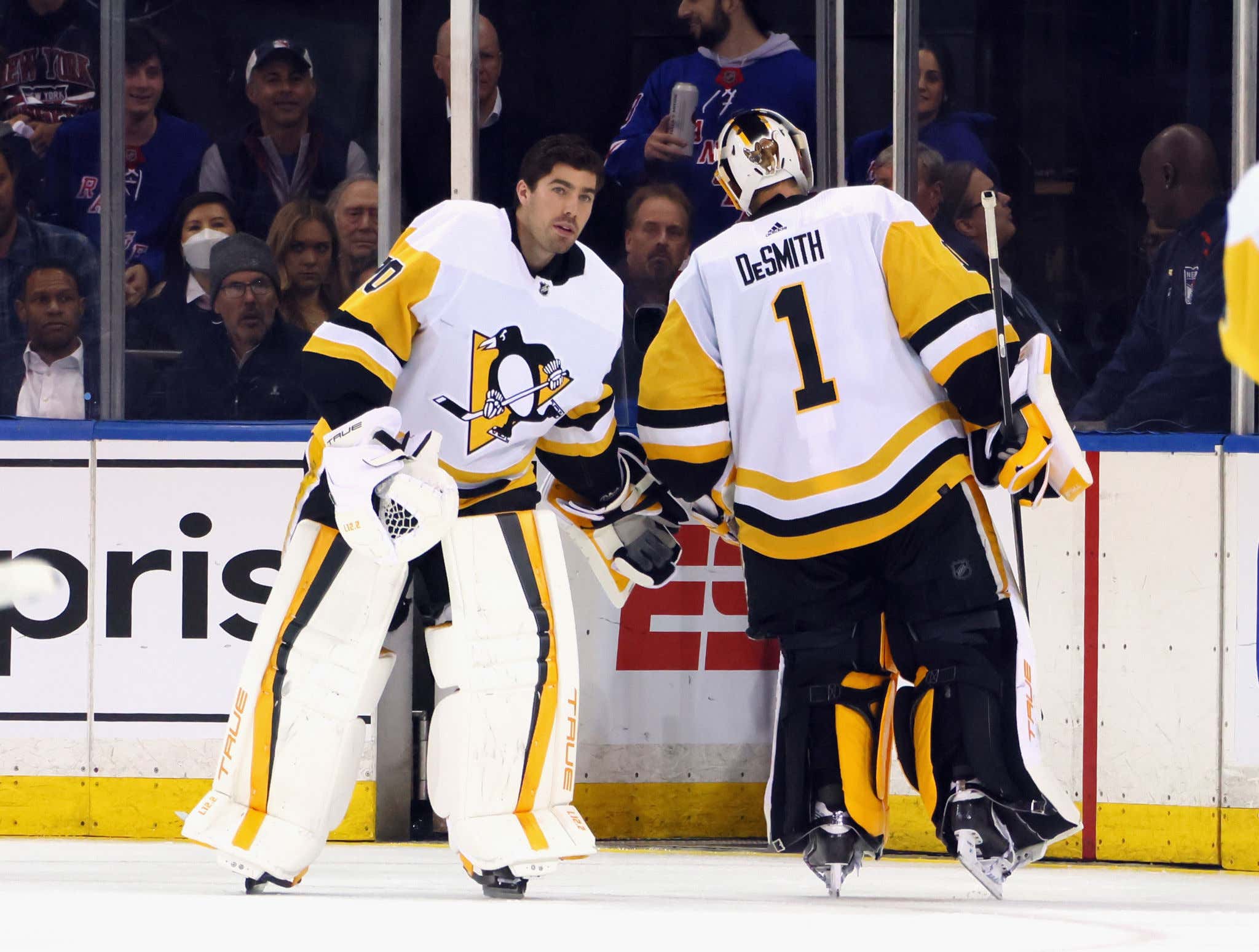 Louis Domingue has life all figured out. Being a backup goalie in the NHL is a dream scenario. You get to enjoy everything that life in the National presents to you, but with a fraction of the pressure that comes along with it. Obviously there have been a bunch of seasons when Domingue has had to jump around between the AHL and the NHL, and I'm sure those bus rides in the AHL feel longer and longer as the years go by. But still. For the most part you show up, toss on a hat, get that right hand warmed up to open the bench door all night, and sit there with the best seat in the house to enjoy some playoff hockey. And anytime your number gets called and you have to play? Well everybody is already expecting you to lose the game, and you're a hero if you win it. Pretty sweet situation there.

So last night Casey DeSmith made 48 saves on the 51 shots he faced through close to 90 minutes. Then halfway through the 2nd OT period between the Pens and Rangers, he mysteriously had to leave the game.

Not sure if it was cramp, a leg injury, maybe he just had to shit. Either way, Casey DeSmith leaves the game and that means that Louis Domingue has to enter the game in the middle of the 2nd overtime period in game 1 of the Stanley Cup Playoffs on the road. You lose that game as Domingue and I'm sure everybody would have just expected that outcome. But you make 17 saves after sitting on your ass for the last 89 minutes of hockey and keep the game going long enough for Malkin to put it away in the 3rd overtime? Louis Domingue is a superstar.

How'd he get it done? How did he stay prepared while sitting off by the Zamboni tunnel the whole night?

Pretty simple, actually. He just dummied a plate of spicy pork and broccoli between the overtime periods and was as locked in as humanly possible after that.

Wasn't the best, but it got the job done. Also I'm starting to think there's a slight chance it got the job done on Casey DeSmith, too. I mean if the whole team ate that spicy pork between the 1st and 2nd periods, it's not unfathomable to think maybe that was the root of DeSmith's mysterious exit from the game in the 2nd period. Maybe that spicy pork wasn't sitting too well with him. He looks a little more like an unseasoned grilled chicken kind of guy to me. Maybe that pork was just a tad too spicy and he had to get out of the game due to a hellacious case of the bubble guts.

Either way, it did the trick for Louis Domingue and clearly our boy Chief didn't get a chance to check out the overtime intermission menu. Because had he known the spicy pork was being served, he'd never be this reckless.

Seriously though. Good for Louis Domingue. A guy who gets a ton of shit for being a pretty brutal goalie as far as NHL standards go. A guy who has spent a few years in the Coast, a few years in the AHL, a few years playing for a dog shit Coyotes team, a few years bouncing back and forth between the NHL and AHL. Still seems like the nicest guy in the world. Always good to see a guy like that get to have himself a moment when the team needs him the most.

P.S. -- Might just write a separate blog on this because I have a lot of feelings on it, but there shouldn't be goaltender interference if an attacking player gets hit into the goalie by a defenseman. Rangers got robbed on that Kakko call.