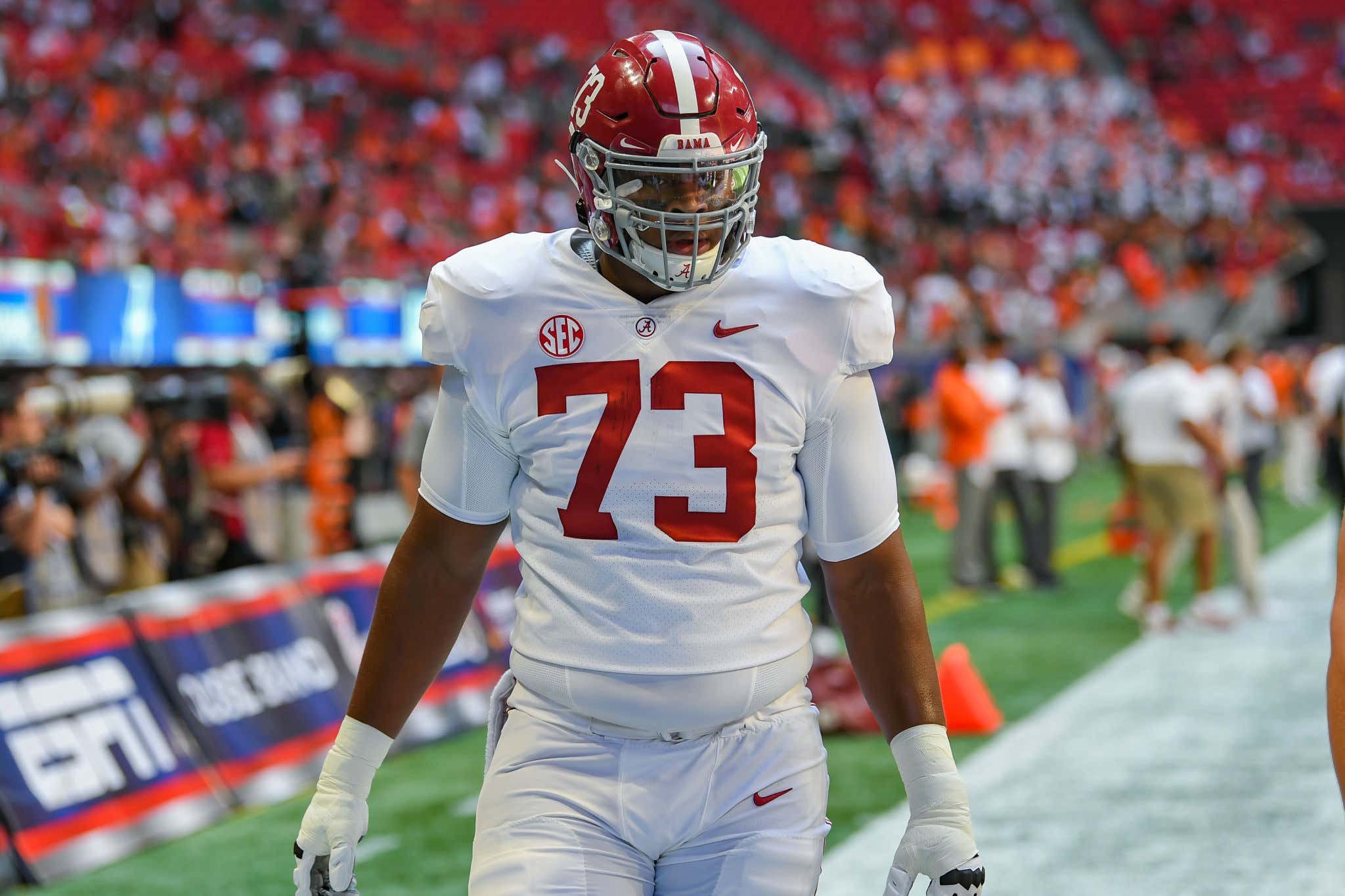 Ooh yeah. We're going there. A 2022 NFL Draft big board of the top 100 prospects in the opinion of yours truly. Let me say some things about this big board before we get into it. First of all, the draft is a very, very, very, inexact science. If it weren't, you'd see all 32 teams hit royal flushes every year and replenish their rosters with multiple star rookies and excellent depth players.

It's so funny that, like, all these teams with massive resources, scouts, personnel people, etc. who monomaniacally do this for a living, have more access to information than any of us outsider folk…STILL get it wrong SO often. You can grind all the tape you want. You can take what any given player says to the public or on social media at face value, or try to read into it and overanalyze it to get insight into their character and intangibles. Advanced stats. Ceiling-floor dilemmas. Groupthink among the draftnik community can inflate or deflate any given prospect's stock, and/or build wrongful consensus around certain prospects. Soooo many factors to consider.

AND it's silly season. Smokescreens galore. Leaks with ulterior motives flying about. I will say, I have biases toward players with greater physical upside, and I inflate the rankings of prospects at certain positions based on their positional value. For instance, it'll take a truly incredible safety or linebacker to be placed above, say, an impact receiver or edge defender. Check out the big board, and we'll dive into some key pre-draft storylines and good draft props from Barstool Sportsbook after that. 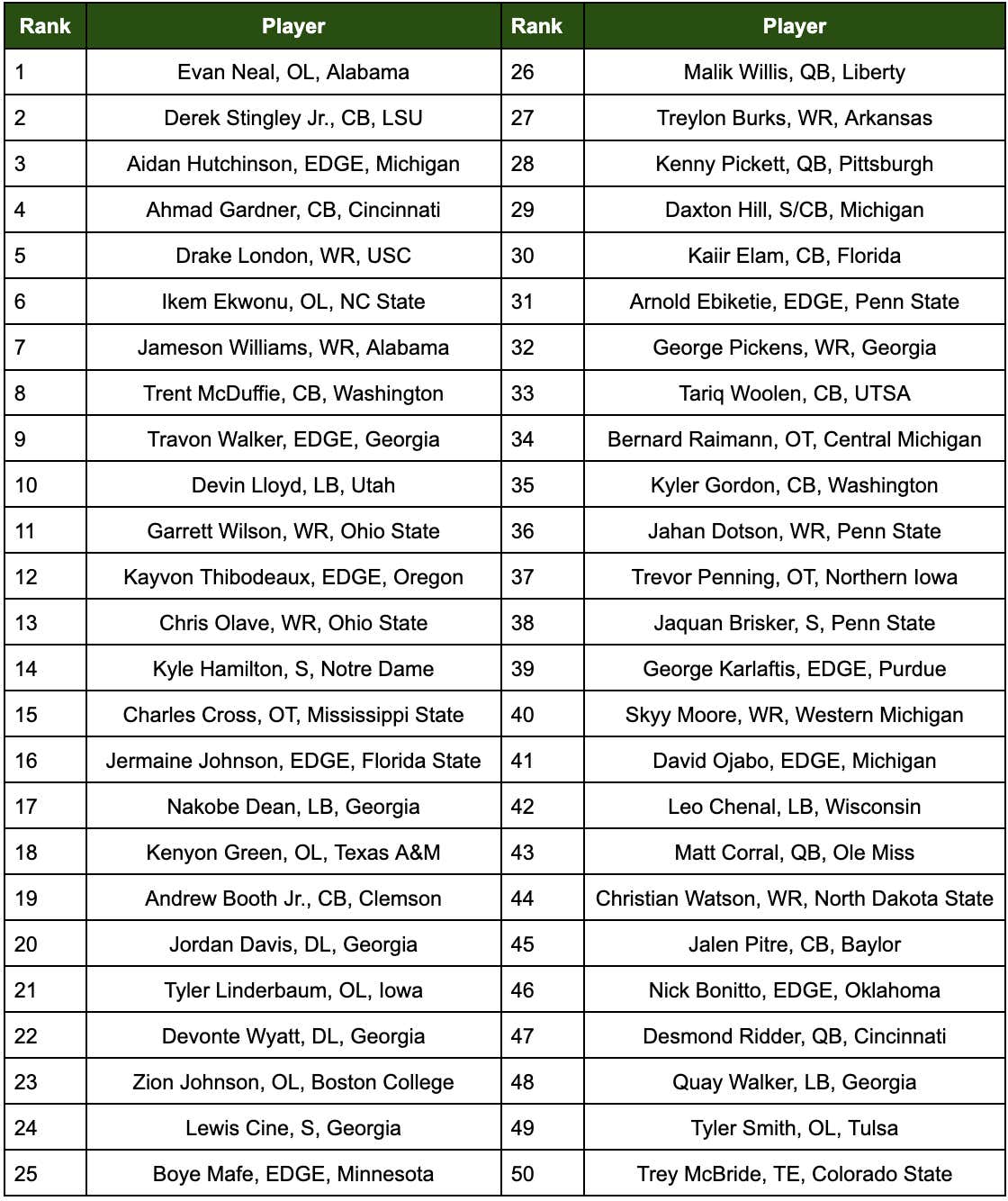 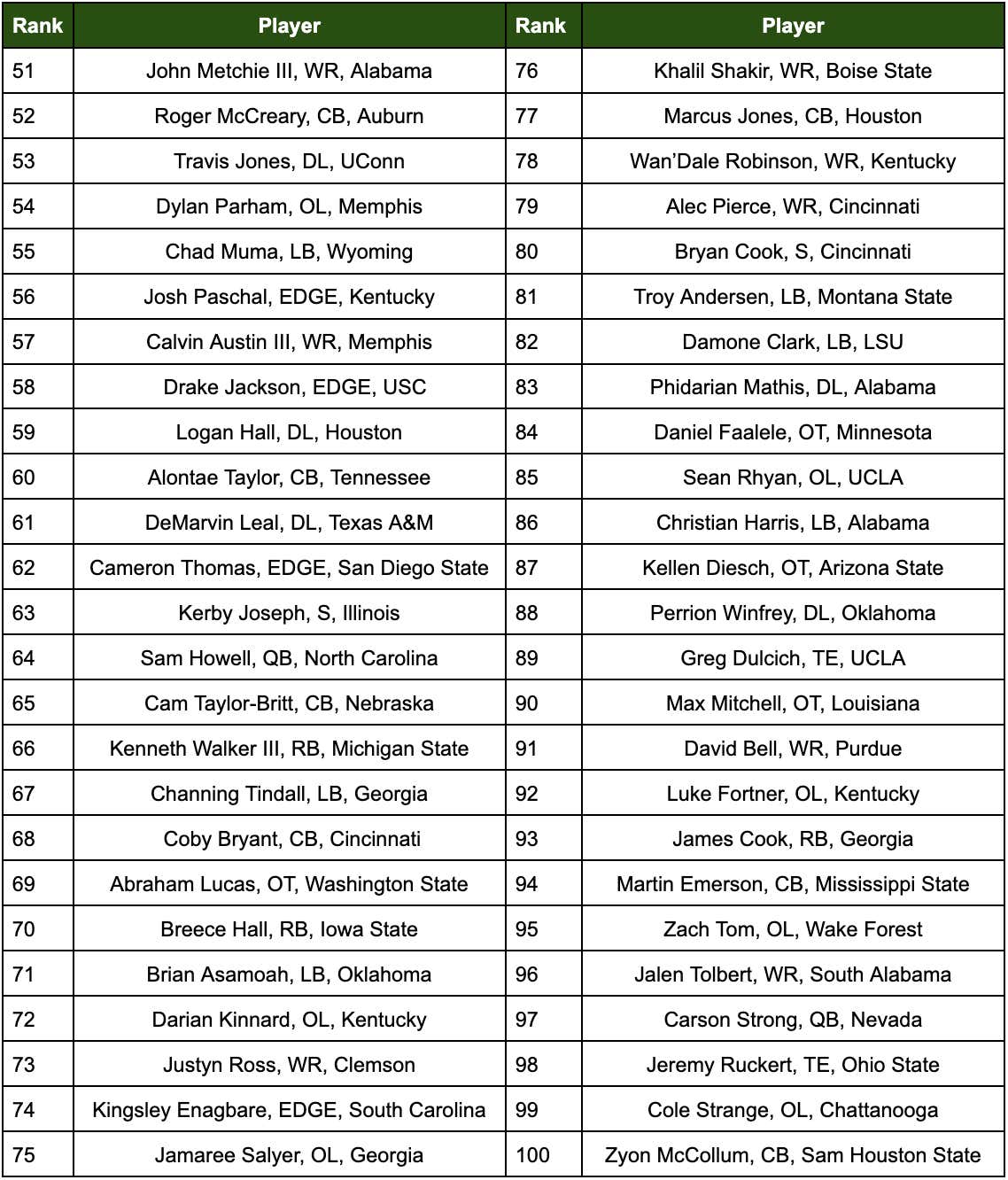 It absolutely is a down year for QB prospects

We have to start with the quarterbacks. It's a tired narrative, I know, but worth covering. It's ugly out there. I like Malik Willis and Kenny Pickett just fine for different reasons. They still have first-round grades, and by ranking 26th and 28th, their positional value will inevitably lead them to get selected in the middle of Round 1, or maybe even just inside the top 10.

The only teams I can think of who are desperate for a QB are Carolina, Atlanta and Seattle. Detroit has a pick at No. 32 overall and can wait. Doubtful Willis or Pickett will help you contend in the NFC South this season with Tom Brady still in Tampa, and the NFC West is notoriously tough. Next year's QB class will probably be better, because it can't be much more barren than this. It's a difficult dilemma to navigate.

Willis could be something like 90% of Josh Allen if he reaches his ceiling, what with his HUGE arm and unique running ability. Pickett could be something like 85% of Joe Burrow if he realizes his full potential. Neither of those outcomes would be bad at all, but we're being pretty optimistic here. Beyond that duo, Cincinnati's Desmond Ridder has a ton of experience, yet his ball placement and overall accuracy is still below NFL standards. Sam Howell is talented but raw and unschooled in pro-style schemes. And I love Carson Strong's arm talent, but he comes with medical red flags about his knee.

Matt Corral ran a lot of RPO-style offense at Ole Miss and takes a lot of hits as a runner. No denying his accuracy and quick release, but he reminds me a little too much of Baker Mayfield with the chip-on-the-shoulder toughness and all that. Still, I like him more than Ridder, Howell and Strong for sure; his 42nd ranking is more a reflection of the caliber of players ahead of him than a huge drop-off from Pickett.

Georgia on the mind

I feel like Alabama is usually the one producing the most elite talent to enter the draft on an annual basis. And while I do have Evan Neal as the No. 1 overall player, and have Jameson Williams seventh despite his ACL tear, the team that creamed the Crimson Tide in the natty, the Georgia Bulldogs, are going to DOMINATE this draft.

In the top 32 prospects up top, I've got six first-rounders from Athens, along with four more players in the top 100. I'm not as high on Travon Walker as some others, but he's just an athletic freakazoid. If not for the unique talent that is Utah's Devin Lloyd, it'd be Nakobe Dean taking the LB1 spot in this class. He's a sideline-to-sideline playmaking machine who can cover and BLITZ.

I'm straight-up blown away by Jordan Davis and Devonte Wyatt as interior defenders as well. Davis ran a 4.78 40 at 341 pounds. He's a mountain, and I'm convinced he has the stamina to last all three downs in the NFL. Wyatt's lateral agility for his size is stunning, and he should be able to blow up numerous plays in the backfield in addition to being an interior pocket disruptor.

Lewis Cine is a sneaky late first-round guy who could step in right away and contribute thanks to his willingness to help in run support and his versatility to play either safety spot, or in the slot. Finally, George Pickens missed most of this past season, but has a legit WR1 skill set and I think he's worthy of a late first-rounder.

Load up on wide receivers — this class is GOOD

I think we're getting to the point where everyone's beating this narrative to death that it's now widely thought that the 2022 wide receiver group is overrated. Um, OK, but Drake London (OU 10.5 draft position) is like a slightly slower Mike Evans. Jameson Williams is drawing Tyreek Hill comparisons. Ohio State's Chris Olave and Garrett Wilson (OU 10.5) are disgusting at route-running and are very explosive. George Pickens and Christian Watson are awesome size-speed dudes. Treylon Burks is a BEAST at the catch point and underrated after the catch. The list goes on.

There are even more guys worth mentioning such as the treys: John Metchie III and Calvin Austin III. I just saw my beloved Bengals roll to the Super Bowl thanks in part to their plethora of perimeter weapons. If you load up on a strong, young, cheap receiving corps in the modern NFL, the rules are only going to work in your favor. Again, this goes back to the position value argument. I'm not being a prisoner of the moment and just saying, "Oh the Bengals did it this way so therefore everyone else should too!"

No, it's just logic. Did you see what the Rams did in free agency after beating Cincinnati in the Super Bowl? They could've brought back Robert Woods and Odell Beckham Jr. to team with Cooper Kupp and Van Jefferson. Instead, they went for a legit No. 1-caliber player in Allen Robinson on the open market, traded Woods, and likely won't retain OBJ. I know Woods and Beckham were off knee injuries. I'm just saying.

Who's about to cape for Kayvon?

It seemed inconceivable that Oregon's Kayvon Thibodeaux would fall anywhere outside the top five leading into this past college football season. Turns out, some of the bizarre crap he's said and his dubious down-to-down effort are among the concerns that have caused his stock to tumble.

Thibodeaux used to be seen as an almost inevitable No. 1 overall pick. Now, he's as low as the fourth-rated EDGE prospect on some boards, and here he checks in at third, behind Walker and Michigan's Aidan Hutchinson. I just think Hutchinson is a better all-around player with a higher motor; Walker's superior size and sheer talent give him the nod over the Ducks star.

I would love to see Thibodeaux slide a bit, go to a slightly better situation, and just use his draft-day slight as fuel to be a perennial Pro Bowler. Then again, he may not fall at all, because any team in the top 10 may embrace his brash, defiant ways and believe they can harness that into greatness. I'd keep an eye on the Giants at 5 and 7, along with the Jets at 4 and 10. A big market is a good match for how Thibodeaux wants to build his brand. I'd lean Gang Green as Thibodeaux's likely destination.

I am not here for your Derek Stingley Jr. slander

I'm not anti-Ahmad Gardner. He's fourth on the board, as you can see. He also goes No. 2 to the Lions in the aforementioned mock. Not low on him at all. I'm lost in the "Sauce". I just like Stingley's upside a little more. So does former NFL star defensive back Ryan Clark, so there's that.

If Stingley's electrifying pro day wasn't enough to sway you further…Look, everyone's gonna play it safe and have the LSU cornerback either on the top 10 fringe or in the teens somewhere on their big boards. Hell no. Stingley has been banged up over the past two seasons, but given his sensational true frosh season in Baton Rouge, you don't think he was playing it a little safe knowing he'd likely be a top-10 pick at worst? Plus, just think about how much of a mess that program has been lately.

Teams might overthink it and not draft Stingley too high. In my latest mock (click here), I have the Texans trading up from 13th to sixth overall to get him, and the Panthers still getting their guy, Kenny Pickett (+150 to be drafted by Carolina), in Houston's spot.

(^^Tried to tell y'all to get Stingley at Under 12.5 in my debut mock, but that ship has sailed!)