ESPN - John Clayton, one of the country's foremost NFL insiders who covered the league to great depths during a 20-plus-year career at ESPN, died Friday after a brief illness, his family said.

"The Seahawks are heartbroken to learn of the passing of John Clayton after a battle with a brief illness at the age of 67," the team said in a statement.

Nicknamed "The Professor," Clayton was known for reporting on the NFL in such a detailed manner that, as ESPN's Chris Mortensen said, "Anyone paying attention walked away a little more educated."

He did that for 50 years, starting in 1972 while covering the Pittsburgh Steelers during the "Immaculate Reception" year up until just weeks ago, when he broke down the Seattle Seahawks' blockbuster trade of Russell Wilson to the Denver Broncos for Seattle Sports 710 AM, where he was a regular contributor.

In 2007, Clayton received what is now known as the The Bill Nunn Memorial Award, which the Professional Football Writers of America presents annually for long and distinguished reporting on football. "It's the highest honor any writer covering this sport can receive," he said at the time.

"The PFWA mourns the passing of John Clayton. John was the PFWA's 19th president (1999-2000) and the organization's 2007 Bill Nunn Jr. Award recipient," the organization said in a statement. "'The Professor' was a friend to so many in our business. Our condolences to his wife Pat, family, colleagues and his many friends."

As did his appearances on "This is SportsCenter" commercials for ESPN, which to this day are hailed as among the best -- including a spot where he appeared for a TV hit in a tie, tore it off, let down his long hair and began rocking out in his basement.

Clayton grew up in Braddock, Pennsylvania, covered the Steelers while in high school and then attended Duquesne. He was hired by the Pittsburgh Press during his senior year, then later moved west, covering the Seahawks for the Tacoma News Tribune before being hired by ESPN, where he worked until a few years ago.

Most recently, he was the host of The John Clayton Weekends show on Seattle Sports 710. He also spent five seasons as a sideline reporter for the Seattle Seahawks Radio Network.

His love for football never waned, until this day.

"Until they plant me, I guess," he told the Pittsburgh Post Gazette in 2018, when asked how long he'll keep covering the NFL. "I love this stuff. What I love about it is there's so much more stuff we didn't have access to years ago and now we do -- the salary information, NFL Game Rewind where you can watch coach's tape. There's so much information and analytical stuff, it's phenomenal."

Sad day for football fans, and for everybody who enjoys great journalism.

John Clayton was a legend that effused talent through the television screen.

He was what sports reporting was like at ESPN before they went the trash tv/opinion-based rubbish route they've evolved into today. (And they lie). Similar to what network news has become.

John Clayton was straight, to the point, and you could trust him and his stat reporting because you always knew he did his homework. He was extremely professional to the point he stuck out, as superior, to his younger, dumber, but louder, uncouth associates.

He was eventually pushed out, or released out of nowhere, and it always pissed me off.

Turned out Clayton was inexplicably one of the major talent layoffs ESPN made back in 2017.

He was one of the longest-tenured employees, there since 1995, and was canned without any goodbye week, or honor whatsoever. Classy.

And like the stand-up guy that he was, Clayton took the high road on his way out the door.

Clayton was extremely well-liked and respected in the print journalism side of covering football as well.

His famous "Mailbag" on ESPN.com and ESPN's page 2 was always must-read.

One of my good friends from Loyola, Tony, was from Buffalo and is obviously obsessed with the Bills.

He used to write in to John Clayton like once a week. I'm pretty sure he'd watch the game. Sleep on it. Wake up the next morning and watch the game tape back at slow speed breaking down each play with a pen and a notepad. Like what Jerry Thornton does. Then recorded his thoughts and sent them to Clayton.

Clayton used to respond back to his ridiculous questions, (Hey John, why the hell are the Bills playing Doug Flutie's old ass? J.P. Losman is the truth. He's gonna return us to glory. Start Losman am I right?")

Dear Tony B. in Lackawanna...

At first, Tony never told any of us. But I think like the 2nd or 3rd one he got featured Clayton complimented him or his question or something so he felt like a badass and wanted to show off to us.

It remained a classic joke/story our group still talks about to this day.

To the point that one of our friends, Jake, went on Cameo and paid John Clayton to talk shit to Tony for losing to him in our fantasy playoffs this season.

Clayton, ever the gentleman, did so but in a gentlemanly manner. He didn't swear, and rather than tell Tony he was the worst fantasy player ever, he urged him to work hard to turn it around next year, convincing him that next year was his year.

You could also tell he had no clue how to work cameo, probably a cell phone either, because the video cut off in mid-sentence. Which makes it very funny and charismatic.

One thing that always pissed me off was how ESPN used to go out of their way to portray Clayton as a nerd that got stuffed in lockers.

Never more apparent than when they launched their "4 Downs" segment with professional low life Sean Salisbury.

They used to throw out these ridiculous questions and scenarios and let those two "debate" it out.

It would always entail Salisbury talking loud, aggressively, and down to Clayton, going out of his way to disrespect him personally or physically, before allowing 10 seconds to respond before moving on to the next question.

Something watching this every week taught me was that people who never stop talking to hear themself, or talk over other people, or talk down to other people fucking suck and I hated them.

This is a perfect example I found -

John Clayton was one of the last of a dying breed.

After his generation of objective, well learned, and well-spoken sportswriters leave us, you realize it's going to be nothing but tik tok weirdos, "influencers", and caricature bomb-throwers like Skip Bayless and Mina Kimes right?

Rest in peace to a class act always, The Professor, John Clayton.

You will be missed. 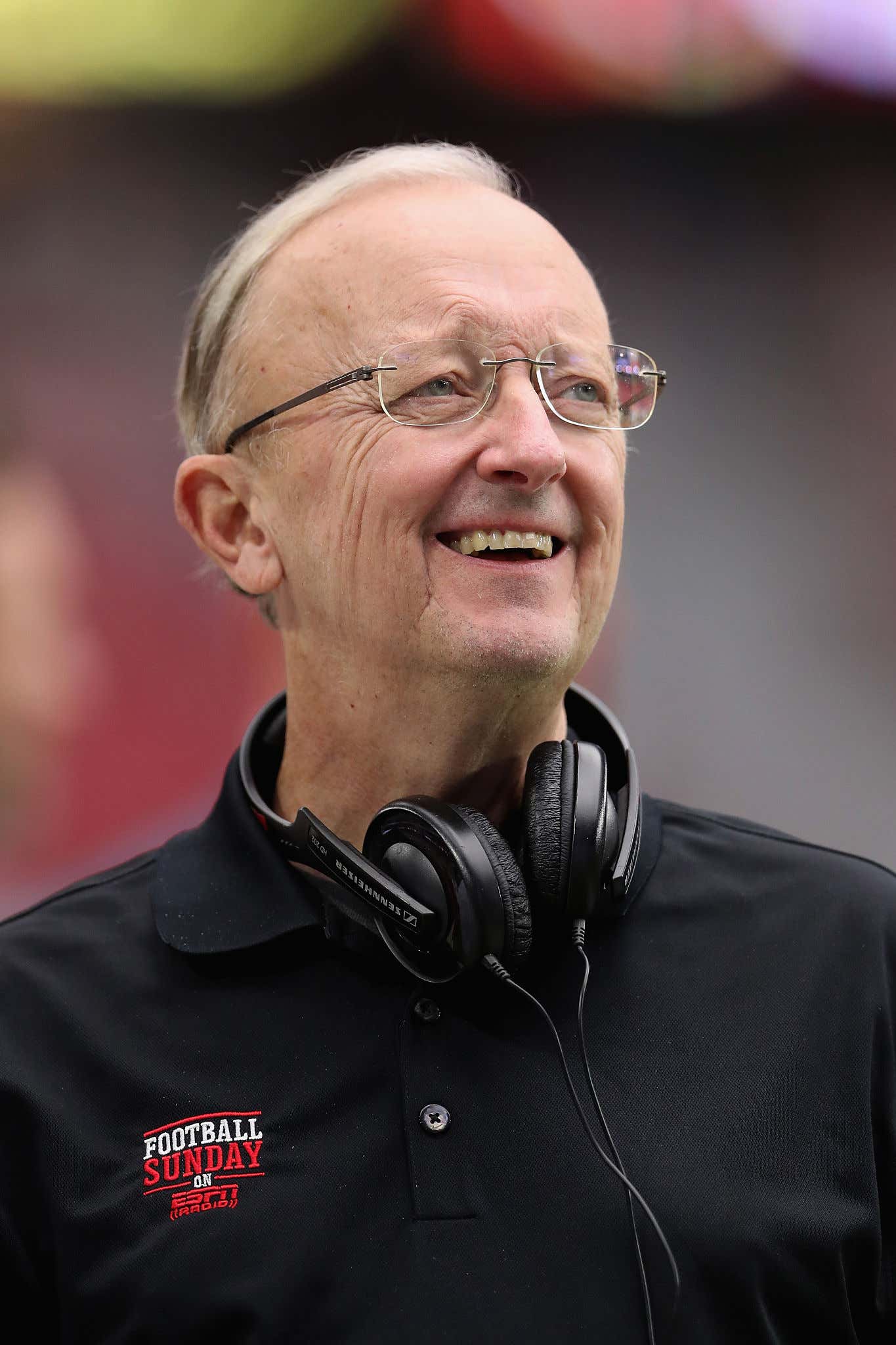 p.s. - did you really think I'd leave out the greatest This Is Sportscenter commercial of all-time?

(Sidebar- the sneaky best part of this commercial was Clayton's self-awareness to lean into and acknowledge the hot in the streets urban legend (that I definitely should have included) that Clayton had a ponytail that you could spot it you looked hard enough while he was on air.)

p.p.s. - I wouldn't be doing my job as future music editor if I didn't include Slayer's reaction to the John Clayton spot. All-time