Last night was just a solid episode of Survivor. Not boring. Not flashy. Just your standard episode of Survivor. Through only two episodes, I think I already like Season 42 more than Season 41. It feels like we've seen way more camp life in Season 42 already. And to me, that's the best part of Survivor. Getting to know the players. Understanding the alliances and relationships they have with each other. Feeling like we know why certain moves happened. That wasn't the case last season. But it has been the case this season so far, and I like it.

Before I get into the blog recap, let me plug Snuffing Torches. We're live on Apple and Spotify. And also you can now watch our recaps on YouTube!!!

We gave a full breakdown of Maryanne, Jonathan and Omar's bromance, Mike being a football guy, and the same dumb mistake that players keep making over and over and over.

Okay now let's get onto the written recap. I'm going to break to the episode up into different parts and give some thoughts as opposed to a full minute-by-minute summary, which frankly just feels unnecessary since I'm assuming you already watching the episode. If not, well thanks for the click anyway!

-We started with Tori already crying. I hate waterworks Survivor so much. It's been what, 4 days??!!!?? And she already is saying she's jealous of Zach because he got voted out and now gets comfort and food. What a slap in the face to Zach, the ultimate superfan who was probably absolutely crushed to be the first voted out. I'm sure she'll be fine and I don't see her quitting or anything, but just annoying. She is firmly in my "not winning" group.

-Drea made a Survivor mistakes that dozens and dozens have made before. And it boggles my mind every single time. STOP TELLING PEOPLE ABOUT YOUR ADVANTAGES. It's Survivor 101. Sure, some exceptions can possibly be made. Maybe later in the game you can tell a close ally if it's pivotal for a big move. But this early never makes sense. Never. They weren't even going to tribal council! But she chose to tell Tori and Swati for an all girls alliance that they didn't even know existed. Just so dumb. Drea is also another person who will not win.

-Someone who could win though is Swati. I have been thoroughly impressed by her both weeks. Despite being just 19, she seems more mature and smarter than 99% of the cast. She saw right through Drea and rightfully identified her as a threat (Drea has both the extra vote and the amulet). Swati is a player to watch and a potential winner.

-It was a great day for America last night. We converted a vegan!!!!! The tribe caught hermit crabs and were eating them, but Hai was hesitant since he's a vegan. But he realized that with limited food this season (no rice), he would need to put his morals aside and eat the crab to survive. I loved this move. It shows he's serious about the game. I bet there's a lot of hippie vegan freaks out there who would've quit the show before eating it, but not Hai. I also think this was a potentially good winner's moment. Showing Hai having an obstacle. And showing Hai overcome said obstacle. Although I do think "obstacle" is a stretch. It's not like being vegan is some medical condition. They choose to be vegan. They can eat meat whenever they want. I hope that Hai treats himself to a ribeye when he gets home. If you're gonna break the vegan seal, don't do it with a hermit crab. Have one nice steak then go back to eating kale.

-Hoboken Mike found himself an idol! (Kind of, not really). He found the Beware Advantage. It's the same thing as last season. It doesn't have any power until one person from each tribe finds it and says their weird, secret phrase at a challenge. Until then, Mike can't vote. I hate that part of it. The vote is the most important part of Survivor and should never be messed with. I definitely wouldn't want this "advantage" with the hindsight of knowing what it is. But Mike didn't. And if I saw something that had the word "advantage" in it and had cameras in my face, I'd probably take it too.

Mike's secret phrase is, "There is such grace in the game of soccer. It makes me cry." As a football guy who doesn't consider soccer a sport, he was not happy.

It's going to be very funny hearing him say that phrase.

-But Mike made the same mistake Drea did!!!!! He told Jenny about who is his closest ally. Not great but a liiiitle acceptable. But then he told Daniel too. Just insane. And Daniel's main ally is Chanelle so he went right to her. That means now 4 people in a tribe of 6 know about Mike's "advantage." And it gives them a reason to vote him out, not keep him. Why would you keep a guy who can't vote with your alliance AND will get an idol if you keep him long enough. Daniel realized this and said that he wants to make sure that idol doesn't activate. So he has to either stop Mike from saying the phrase or vote him out. Great understanding there by Daniel. I like his chances a lot. A potential winner.

-And in something you don't see too often, Mike almost lost the advantage. Couldn't remember where he put. Just classic Mike. Gotta love the guy. I'm surprised this actually doesn't happen more. Just a bunch of trees and dirt out there. That would be a big fear of mine. I think I'd ask the camera guy, "Hey can I get that footage and see where I put it?"

-Over at Taku, the story was Maryanne just being so god damn annoying.

I know she's already being stanned as a queen over on the Survivor reddit page, and she seems like a good enough person, but being that high-strung and annoying is just bad gameplay. You don't want to be stranded on an island with someone who's just non-stop go 24/7. It did seem to be bothering some of her tribe members, but they do also like her which offset some of the annoyingness.

-The highlight of the episode for me was Jonathan and Omar's bromance. They're like the odd couple. As Jonathan said, with his body and Omar's brain they make a perfect human. That might be a stretch but they are a good team. If they go far together, they could down as a classic Survivor pair. I like them both a lot.

-It seemed pretty clear that Jonathan, Omar, and Lindsay are the majority 3 alliance in that tribe with Maryanne and Marya on the outs. 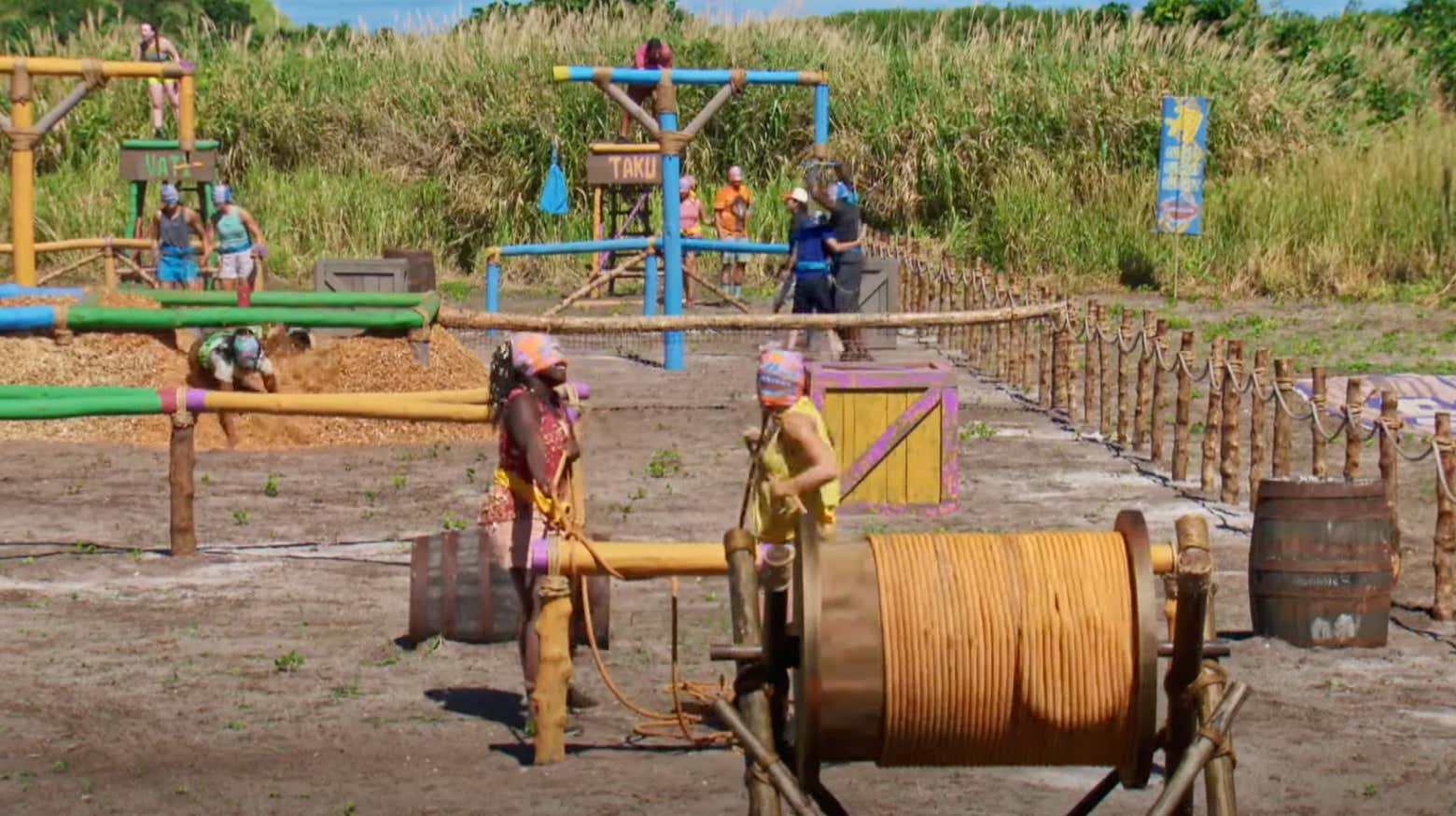 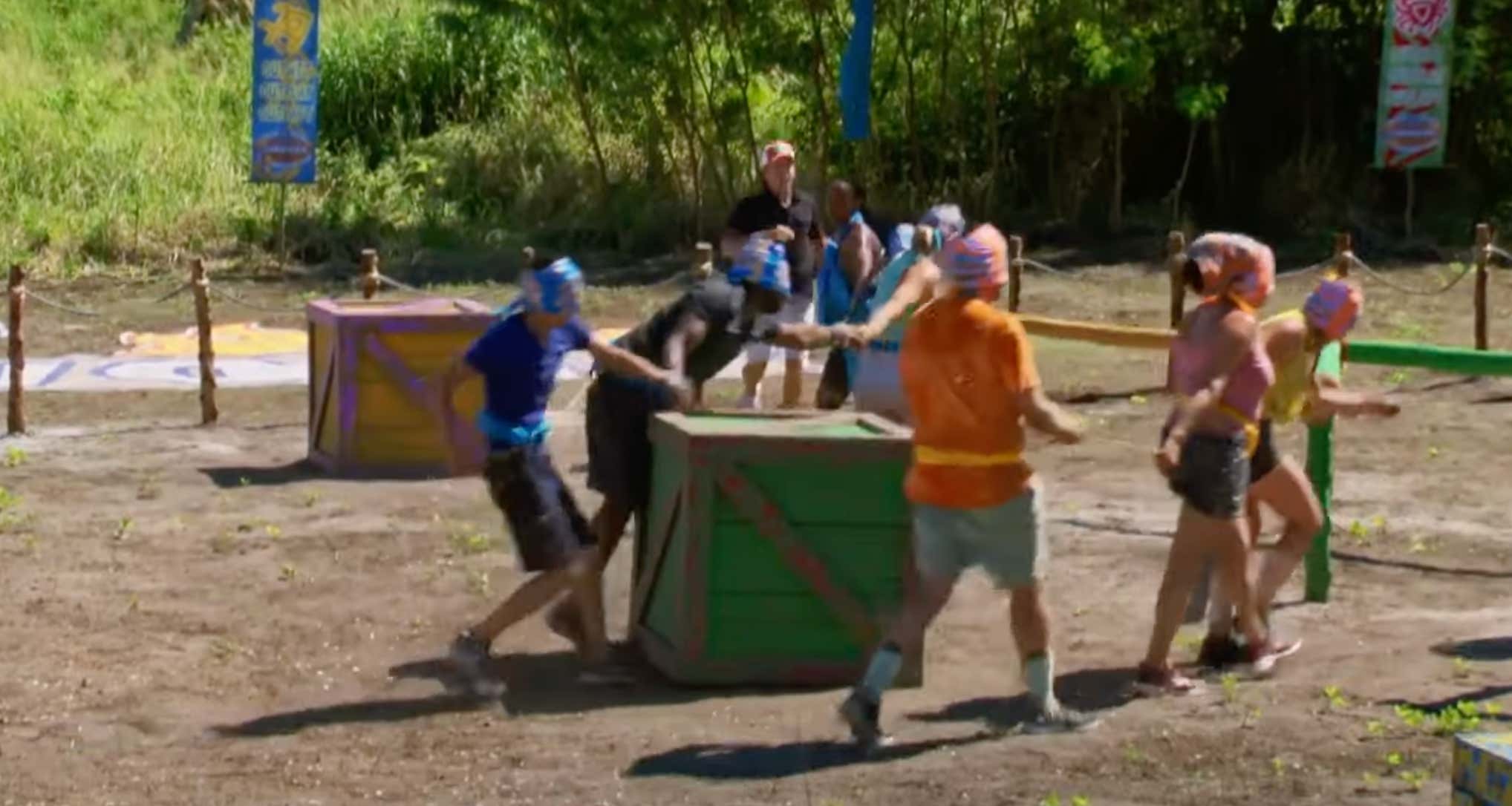 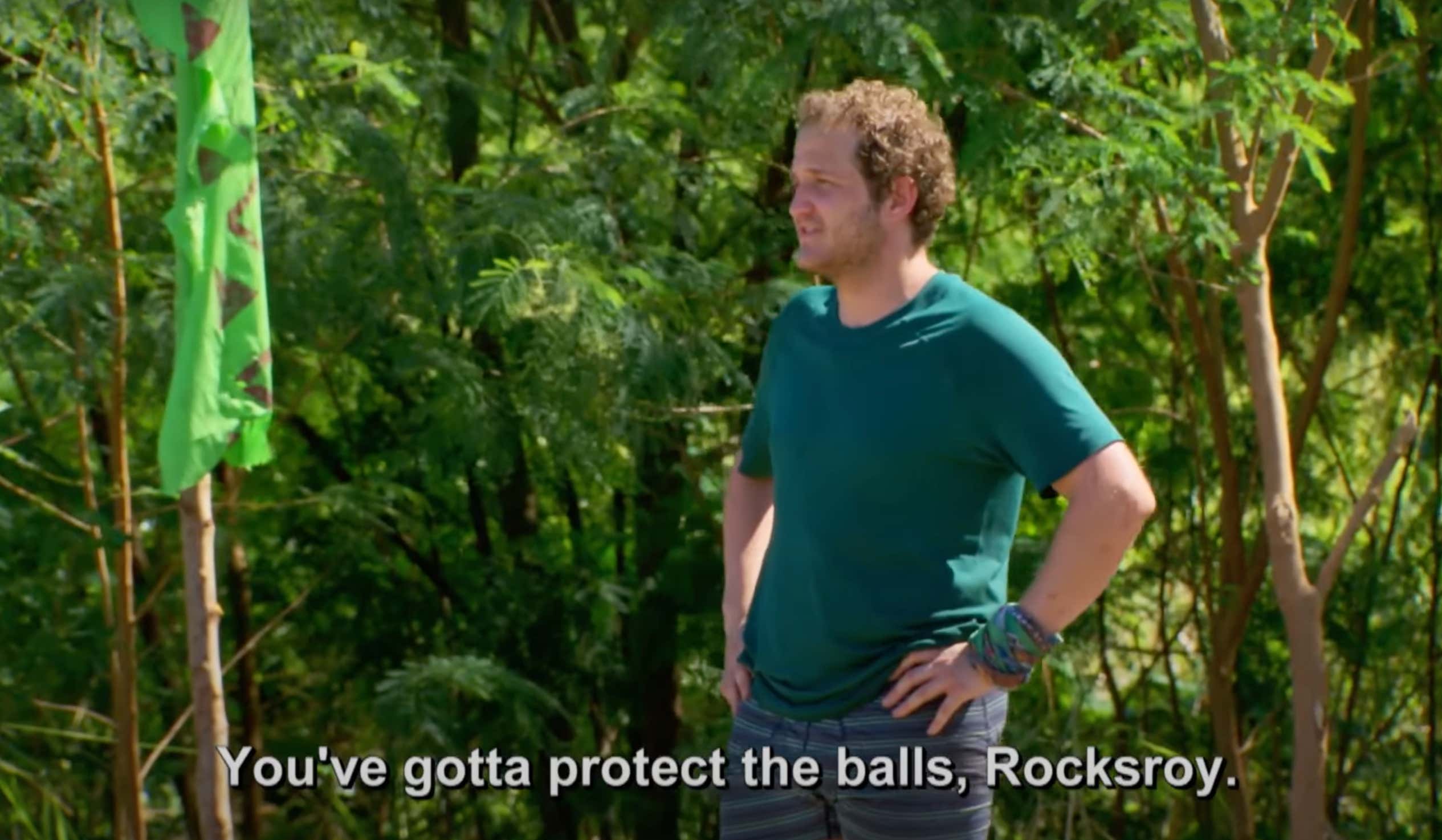 -This is a classic Survivor challenge with the caller directing a bunch of blind folded idiots. Jonathan, Drea, and Lydia were the callers for their respective tribes. Both roles seem miserable here. I have a steadfast rule of never volunteering for a solo role in a team challenge (this, puzzles, basketball shooter, etc). Don't want the spotlight in case you fuck up. But being blindfolded and maybe banging your head and bleeding also seems not fun.

-It was a pretty close challenge. The highlight for me was Jonathan sounding like he was doing a Batman audition while he was yelling. Green finished first and won a lot of fishing equipment. Blue finished second and won less fishing equipment. And orange lost and was heading to tribal council.

-Oh and the other highlight here was Maryanne's weird admission that she had a crush on Zach??? A man on another tribe she exchanged zero words with. But she likes skinny white boys. So… sup? It reminded me of the classic Billy and Candice moment in Cook Islands that may never be topped.

-It was pretty clearly going to be either Marya or Maryanne going home. Jonathan, Omar, and Lindsay were a tight alliance of three. They basically had to decide if Maryanne was too annoying and erratic to keep around. She also was caught looking for an idol. While they did like and connect with her, someone like her is maybe more likely to betray them at a merge with unpredictable gameplay.

-Marya was just kind of along for the ride. I think she would've been a trusted number for them the whole game. Someone you could've probably dragged along to Final Tribal Council as a goat. But they also felt less connected to her. And who knows how people really felt on the island about each other. We obviously only see a small sliver.

-Maryanne once again professed her love for Zach at Tribal Council. It's a little bit creepy to be honest. I think maybe her tribe kept her for Zach's safety? If it was just Maryanne and Zach alone at Ponderosa, who knows what could've happened. But it was also kind of sad talking about her batting .000 in terms of finding love. She does seem like a nice girl. Hope she finds some love out there. It might just not be with Zach.

-Marya chose to play her Shot In The Dark advantage. I'm starting to think they just didn't explain it well enough to the Season 41 players. Because only Sydney used it last season. We've now seen it used two weeks in a row. And it made a ton of sense in both instances. They were both clearly the targets and their wouldn't be enough to change that, so it was smart to sacrifice it for a 1/6 chance in safety. Unfortunately for her, the gamble didn't pay off and she was not safe. Interesting note is that Jeff revealed the scroll himself instead of the contestant (like Sydney and Zach did). This is a good chance by the producers and makes it more suspenseful.

-Marya was out in a 4-0 vote. Not much suspense. Zach was saved.

I'm going to break it down this week into two tiers. People who can win and people who can't.

People Who Can Win