DAILY MAIL — Ukrainian models, designers and editors that left their hometowns for Milan Fashion Week have spoke of their difficulty at being away from their friends, families and employees as their country descended into a war zone within hours of their departure.

Many who expected a week of glamour in the Italian fashion capital have spoken of bizarre parallel worlds as they walk the runway in front of A-listers in designer clothes, while their friends and family hide out in bomb shelters at home.

Together with Russian models, they are using their platforms to raise awareness and money - with one even going so far as to launch an OnlyFans account.

Braveness takes many forms in times of war. The people of Ukraine have been rightly glorified for their fierce resistance, from their outnumbered and overmatched soldiers to the everyday average citizens — professors, computer geeks, janitors, housewives who have never seen a gun in real life before, battling Russian troops in the streets, on the front lines. The President in fatigues and a flack jacket telling Washington "I need ammo, not a ride" as he moves from bunker to bunker while a hit squad of professional mercenaries hunts him. Almost unimaginable heroism that instantly united people around the world who a day before the invasion couldn't agree on whether the sky was bue or if water was wet.

But taking up arms isn't the only way to literally put your body on the line for your country, as became clear from the Ukrainian models at Fashion Week in Milan. 1300 miles away and unable to return home, they had to find a way to fight alongside their countrymen holding rifles while all they had in their hands were Prada bags.

There's Ukrainian model Kristy Ponomar, who "walked" for her homeland — no doubt serving as an inspiration to the women and children fleeing 30 miles or so in freezing temperatures for the border, also walking.

But said that it was the 'hardest show of her life' and that she was 'walking for Ukraine'.

Sharing a teary picture of herself to Instagram, still dressed for the show, she wrote:  'F* war! F*  Putin! I wanna come back home and stay safe! I just did @prada it’s was the hardest show in my life. I walking for you my Ukraine. Thank you amazing @prada team for support me'.

Then there's Anna Mazzhyk, who gave not just her lower body but the entire thing:

Ukrainian Anna Mazzhyk told AFP she was awoken by her parents at 7am before a show, only to hear that 'Russia is invading Ukraine'.

While she isn't able do join the war effort in Ukraine, she has decided to start an Only Fans page and will donate all proceeds to help.

Sharing a photo to Instagram in her underwear and holding a Kalashnikov, she wrote: 'Photo to attract attention, Ukraine, I love you.

'Ok guys, here is something for you. I'm not in Ukraine,  but I'll give my body for that, if i have to. Subscribe to my OnlyFans account, all money I will donate to Ukraine.

'Deed and body. For your people and country. I didn’t think that I would ever do it, but already f*** for everything, I will help in every way that I can.' 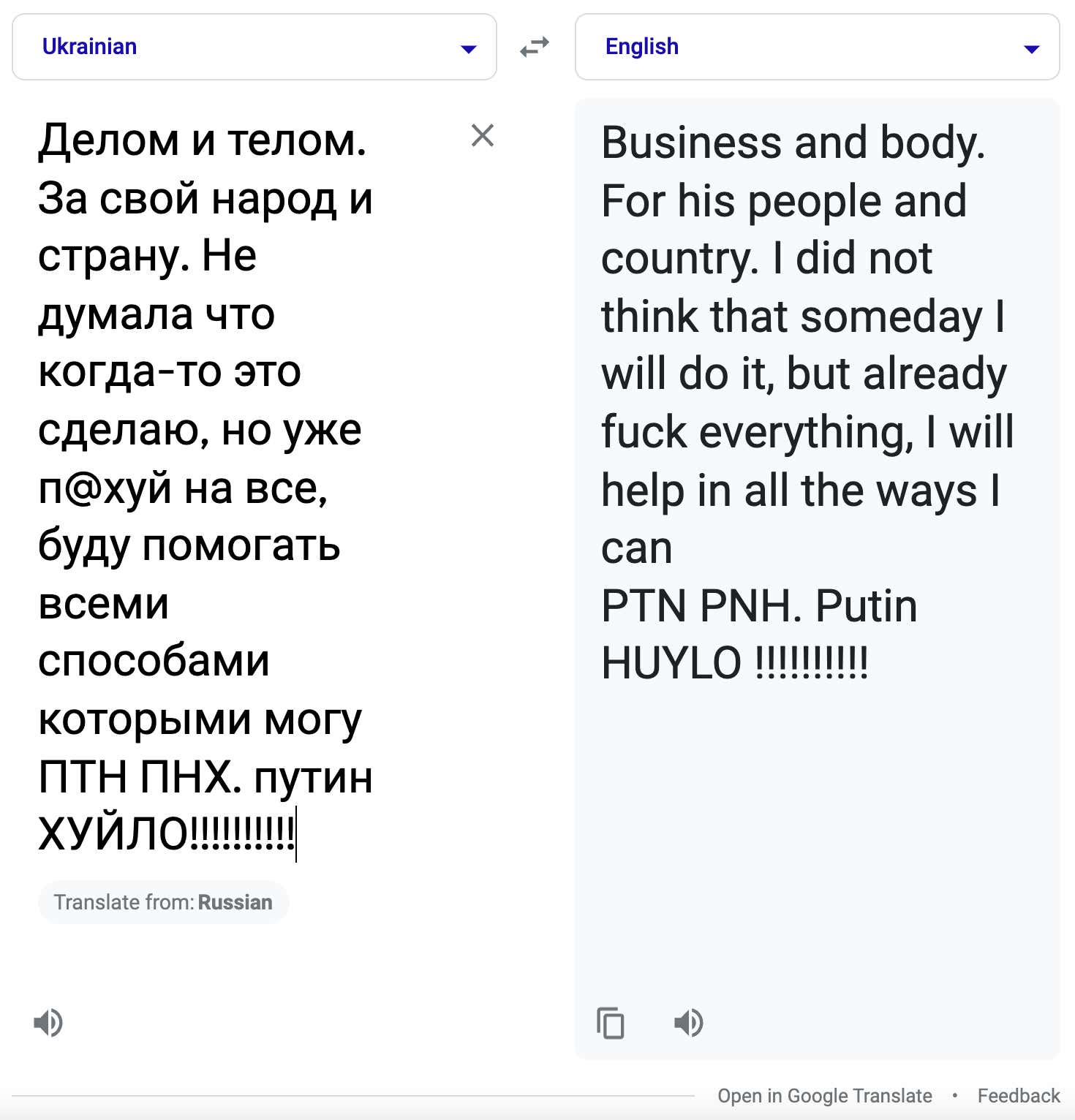 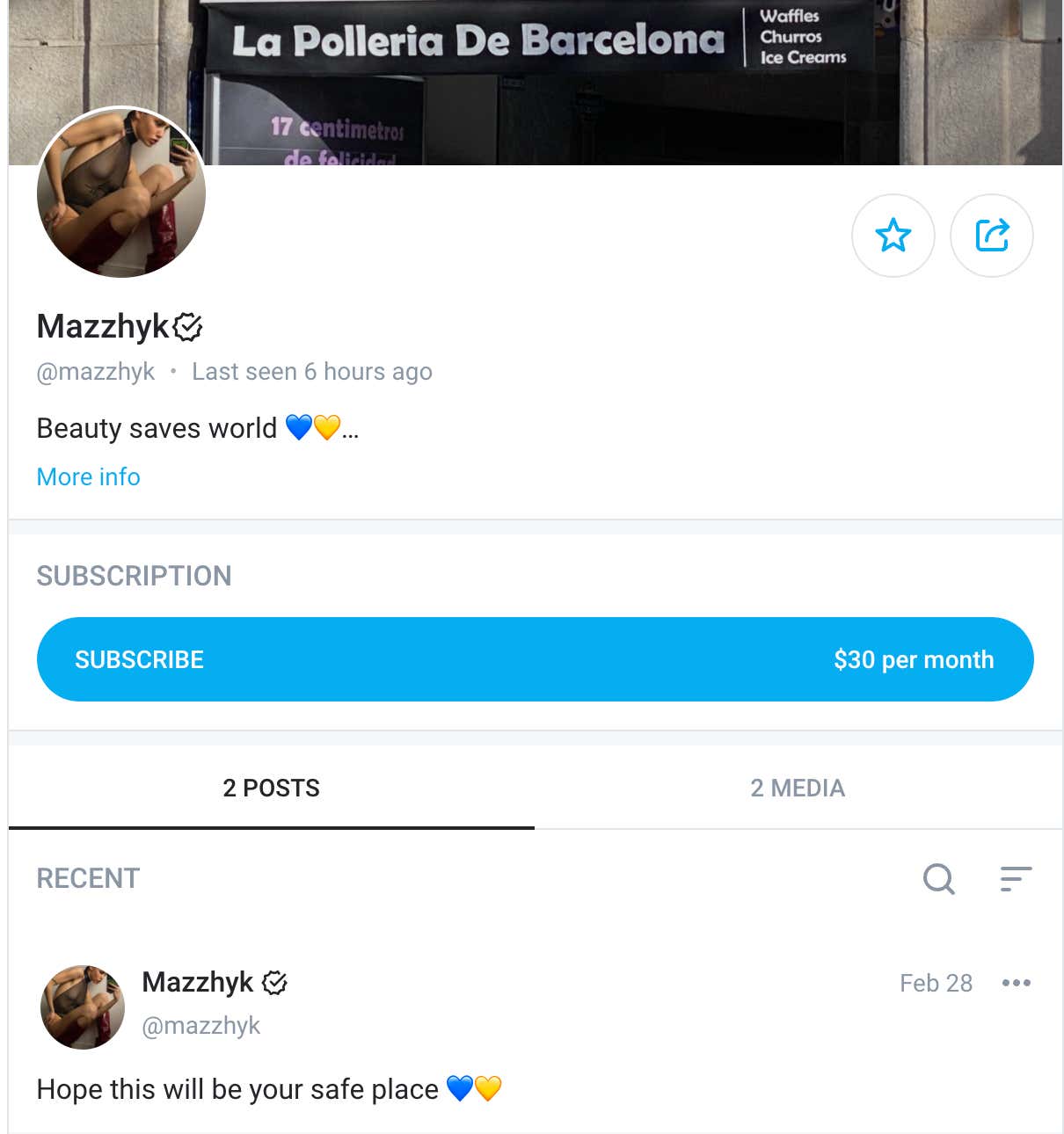 ("Beauty saves the world" I wish I knew that before I spent the last 2 days worried about nukes.)

She's also shared snaps of her outside the Prada Foundation in Milan, looking typically stylish as you would expect.

And bombs aren't just the things we've seen obliterate apartment buildings and hospitals and Holocaust memorial sites — some are more subtle and metaphorical.

'I was crying before the first show because it's difficult for me,' said the 22-year-old Kyiv native, outfitted in a puffy Prada vest and surrounded by her equally spruced-up friends, told the news agency. 'We're all wearing sunglasses to cover up our puffy eyes,' she said.

She then zoomed in on her bloodshot and teary eyes, explaining: 'The first two photos are what you see. The rest is what actually happens. Now my morning begins like this and I am infinitely happy that I see "so far calmly".

'It was like a bomb, an emotional bomb,' she said.

Their "front lines" may be 200-foot long catwalks lined by Kardashians and pop stars instead of 40-mile convoys of tanks and artillery lined with dead bodies of civilians. But everyone's sacrifice is different.

Anna's OnlyFans page, where she says all proceeds will go to Ukraine's defense efforts.