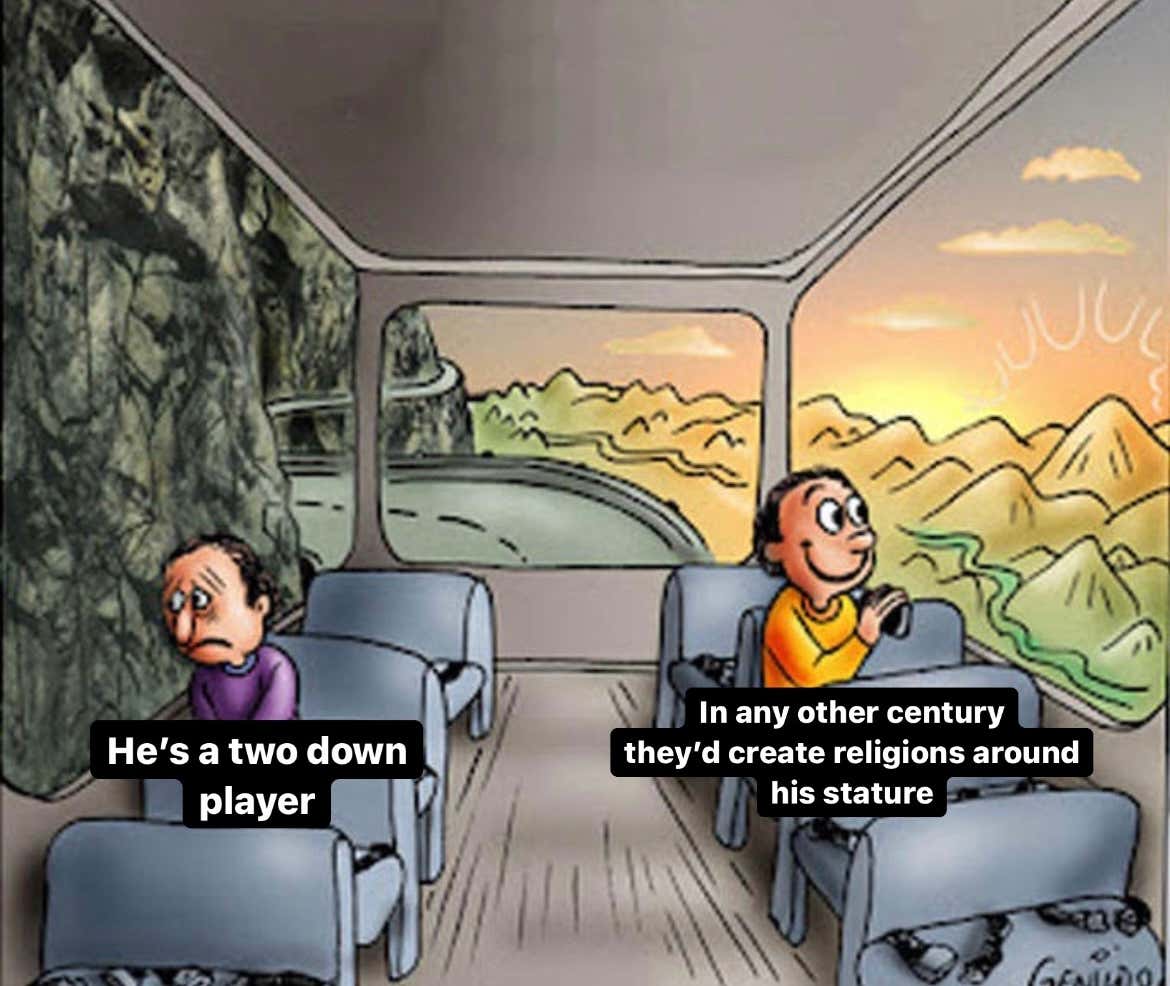 Every single year, as we inch closer to the NFL Draft, prospects get parsed over so many times you start finding enough reasons to hate every single prospect. I have a working theory that if they held the Draft earlier in the calendar year more teams would find success because they wouldn't overthink things so much. Now you might be reading this and think something like, "Nah that's just people on Twitter. These teams are so much smarter than that." No, no they're not. Even for all the psychological evaluations they run players through, all the private detective work that goes on in these kids' backgrounds, the Las Vegas Raiders still end up with two first round picks behind bars, teams still swing an miss wildly on top 10 picks, everyone at every level fucks up. Of course, there are different types of fuck ups: you can swing for the fences on a known risky prospect and it wont always work out, or you can play it too safe selecting a guy who never had that high of a ceiling to begin with over a better player you didn't like for a relatively minor reason.

The point of the Draft, in my estimation at least, should be to leave it with as many good football players as possible. This all seems novel but it really isn't, folks fuck up their drafts and get fired every single year. The 2017 New Orleans Saints draft class should be the standard, non-quarterback centric draft you should be aiming for.

Seven players, no top 10 pick, all still in the League, six of which are still starters for the Saints, and the only one not still with New Orleans - Trey Hendrickson - signed for big money last offseason and was a key factor in the Cincinnati Bengals getting to the Super Bowl. It's hard to imagine a Draft going much better than that. Granted, six of those picks happened in the top 103 selections of the entire Draft, which undoubtedly helped. But, to be even more fair - only one of the top FIVE picks from that draft are still with the team that selected them (Myles Garrett). John Ross went ninth. Teams are bad at this, they need as much help as they can get. Which is why I'm here today.

I don't know how often I'll do this. Any time I see the general conversation around a player start to go in the wrong direction I'll toss in my two cents. Because in my eyes there are obvious guys who will be solid at worst NFL players that people are being overly negative about for no reason other than having too much time on their hands. The guy I see that happening the most with - by far - is Georgia defensive tackle Jordan Davis.

One thing I heard recently was, and I'm paraphrasing here, "you can't take Jordan Davis in the first round like Dexter Lawrence because Lawrence is at least a three down player." If you go back and listen to the discussions around Dexter Lawrence when he was coming out of Clemson they were EXTREMELY, "he's a two down player you can't draft him in the first round." Oddly enough I viewed Lawrence then as I do Davis now: a guy with Championship pedigree who anchored an elite college defense that should carve out a nice role for himself at the next level.

The two biggest complaints I hear and read the most about Davis are: his age and his counting stats. The age complaint isn't even a real thing. There was a Georgia tight end a few years ago also named Jordan Davis, so when people Google this Jordan Davis to find out his age they can only find the old Jordan Davis. He's a normal aged prospect, find a new slant. I also don't give a shit about his counting stats. He's not Aaron Donald, I think that much is clear. I don't think he can be your primary pass rusher from the interior. If that's what you're drafting Davis for you will be looking for a new job sooner than later. You don't buy an anchor for your boat and then blame it for being a bad sail. I find it impossible to believe a man built like the original Hummer but moves like this wont be successful at the next level:

His snap count was what it was for a few reasons. For starters, it's fucking Georgia. They have multiple defensive linemen in this class and I imagine all of them will be varying levels of good. Because, again, it's fucking Georgia. You wouldn't pass on someone from Alabama because they also played next to great players, same way you wouldn't have passed on a prospect coming out of The U, same way you shouldn't pass on a corner or receiver coming out of LSU, etc. But the other reason his snap count was limited, on occasion, was the fact that he would show signs of fatigue specifically on longer drives up against someone running no huddle. Which is something I think people are making a bigger deal out of than need be. Yes I too wish we could turn the sliders off and not have the Gatorade cooler pop up over his head and have him out there every snap of the game. I wish that for a lot of players. I'm sure the Falcons wish their entire defense wasn't sucking wind and could have made a single stop in the Super Bowl. He's 6'6" 340+ pounds, it happens. If at worst you still only believe he's a two-down player, those 33% of snaps he's not on the field aren't enough for me to pass on him.

Draft Jordan Davis. The Eagles have three picks in the teens, they would be wise to look his way. The Chargers at 17 could benefit from his presence on their defensive line. The Patriots at 21 could pair him and Christian Barmore and never yield a rushing yard ever again. Ditto the Bills at 25. If he falls to the second round, which at this point feels likely, the Jets could build something horrifying around Davis and Quinnen Williams. Here's to hoping the Bucs draft him, park him next to Vita Vea, and drive NFC South offensive line coaches insane for the next seven years.