Earlier today I'd written a blog about a Des Moines, Iowa pastor in trouble with the law for (allegedly) helping his son play an aggressive version of Ding, Dong, Ditch that caused a lot of damage to homes. To see if I could find some funny comments or more #tea about the people in the story I swung on over to the official Des Moines PD Facebook page, but no dice. Instead, this story that they had just posted caught my eye and it immediately sent shivers down my new mom (have I mentioned I'm a mom enough yet?) spine: 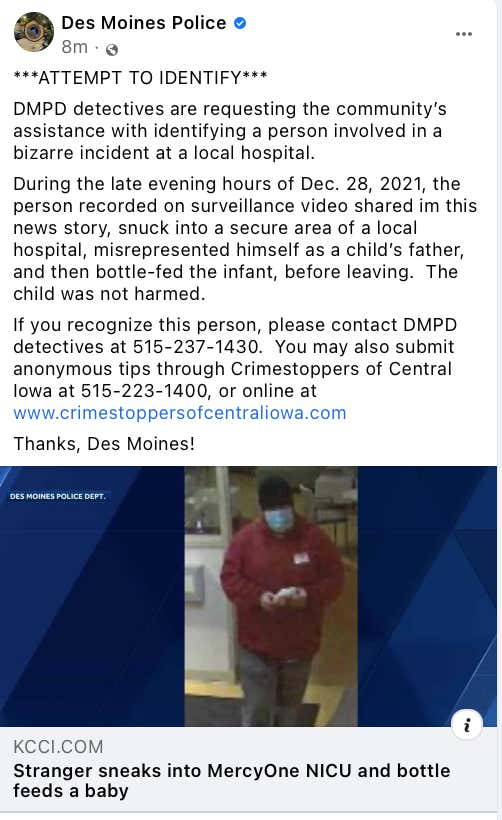 A total stranger walked into the neonatal intensive care unit at an Iowa hospital and bottle-fed a baby who wasn’t his, according to police.

Des Moines Police are trying to identify a man they say got into MercyOne medical center around midnight Dec. 28 by pretending to be the father of a baby. He slipped by a nurse, bottle-fed a baby in the NICU and then left.

“The family, obviously, is very frightened. This is something that would startle any parent,” said Police Sgt. Paul Parizek.

MercyOne called the incident “extremely troubling” in a statement and says it has since expanded security by reeducating NICU staff and security, increasing identification checks and sign-in logs and increasing security and staffing in the NICU.

“We don’t know what his true intent was or what he was planning on doing further down the road. We need to get him identified, so we can at least hear his side of the story and have our investigators better understand what was going on,” Parizek said.

One of the many things I was unprepared for about being a parent was the endless stream of "what ifs" and worst case scenarios that play on a loop in the back of my mind now. We live smack dab in the middle of a secure apartment building in a safe little town where nothing ever happens and I still double lock and deadbolt our door every night, and often hop up out of bed to double check that I did so. Even when he's right down the hall or slightly out of sight I fret, so I have to think that's x100,000,000 for NICU parents who can't always be there, and that's not even counting their medical worries. Losing peace of mind over hospital security has to be beyond jarring for any family involved.

I know I'm going to keep checking in on this because I have so many questions.. It's just bizarre - what was the motive for this? Did he bring his own bottle with the intention of finding a baby to feed, and if so what the hell was in it? Or did he just happen to see a bottle sitting out & decide to try feeding the nearest baby? My mind is even worrying that he didn't wash his hands before picking the baby up, and that he could have brought germs into a fragile environment.

People were speculating that maybe this guy had some connection to that particular baby, but police said the family was frightened indicating that's not the case. And I think it's a big wake up call that even if a building has top notch safety practices, it only takes one moment of complacency to put patients & staff in danger.

Among the more bizarre takes I saw on that FB post were that "maybe the man was sad and just needed to hold a baby", and that the man should be praised for helping feed a baby. (I think Anna is on to something. We're watching you, Rick Jr.): 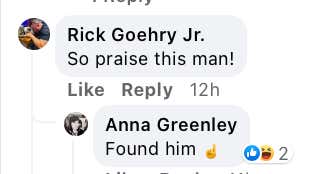 Overall I'm relieved the baby is ok because this could have been something so much worse, and as the hospital said they'll be doing a security refresh & overhaul. We can be certain it won't involve this guy: